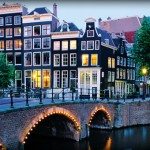 Everyone would love the city of Amsterdam. From the streets up to the picturesque Amsterdam canals, most especially the Amsterdam Art and the historic structures in this modern world, everything is praise-worthy and all the cents paid reaching this marvelous city is also all worth it.

Netherlands: The Land of Surprises

There’s never a dull moment in the Netherlands. Being one of the world’s most densely populated countries, it’s impossible not to meet new faces of different kinds every time you step out of your hotel. From partying at the most lively districts of Amsterdam to biking across long strips of natural wonders, there are so many things to discover in the land America calls Holland.

As a society, the Netherlands have one of the most tolerant cultures in the world. This is the country where prostitution is permitted and gay marriage is legal. But more than that, Amsterdam is also the place for great architecture, such as the Eastern Docklands, which just looks amazing at night.

For those looking for nature, the Hoge Veluwe National Park is found in the middle of the country, which you can roam using bicycles. If you look hard enough, there are spots along the countryside where picturesque windmills and fields of tulips are waiting to be found. You will also not want to end your trip to the Netherlands without going to The Hague where the restaurants, hotels, and even the landscaping are at their finest.

[quote_colored name=”” icon_quote=”no”]Netherlands is also home to artists like Van Gough and Rembrandt, as well as Frans Hals, Piet Mondrian, and Hieronymus Bosch. Try to make it in time for the annual Art Amsterdam, where contemporary art is exhibited every month of May.[/quote_colored] The month after that would be the Holland Arts Festival, where other branches of visual arts get their spotlight. There are also lots of contemporary art galleries in the area, including Radar Architecture and Art and Achenbach & Hofland, both of which, among others, dedicate their display to local contemporary art.

Make your way to the Netherlands and you’ll find yourself wanted by the locals to be there. Get ready to be welcomed, entertained, and most of all, have fun.