Alessandro di Mariano di Vanni Filipepi, born in c.1445 in the era of the early renaissance. Botticelli sought to achieve a loose and rhythmic composition, using an undulating line that’s meant to lighten the borders of his figures precisely. The result of his ambition was the creation of an imaginary world, where everything seems to have a superficial existence – it is as if in our thoughts that the subjects came alive. Despite having an innate preference for conservative methods he also had an open mind for innovative trends. Let’s check out the ten most famous Botticelli Paintings.

The Birth Of Venus

Venus, The goddess of love born as a fully mature woman. 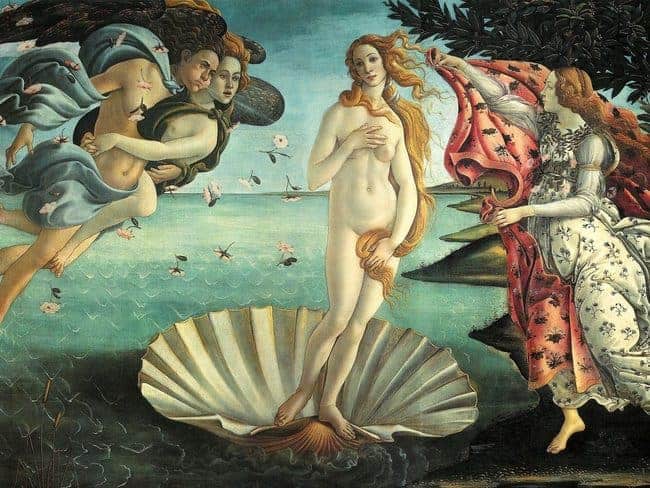 The Birth Of Venus was made in the year 1485. It depicts how the goddess of love is born out from a seashell as a fully matured woman, significantly symbolizing the female genitalia in classical times. The theme of this painting was launched by Medici Lorenzo de’ and the model for this work was the Aphrodite of Cnidos, an aphrodite statue. There exists no literary context concerning this masterpiece so it is assumed that the deft recreation of the movement is an invocation of beauty into the world.

A cluster of mythological figures frolicking in a lush garden. 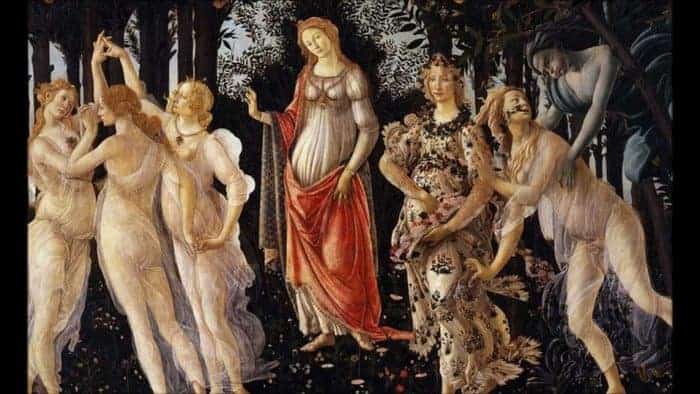 La Primavera was madein the year 1478. This painting is also hailed as “Allegory Of Spring”. The painting features six female figures and two males, along with a cupid, in an orange grove. It is described as one of the most written about, and most controversial paintings in the world. It depicts a group of figures from classical mythology in a garden, but there isn’t any story whatsoever that brings this group together.

Abortion Of The Magi

The event of the three wise men or the Magi offering their gifts to baby Jesus in the Bible. 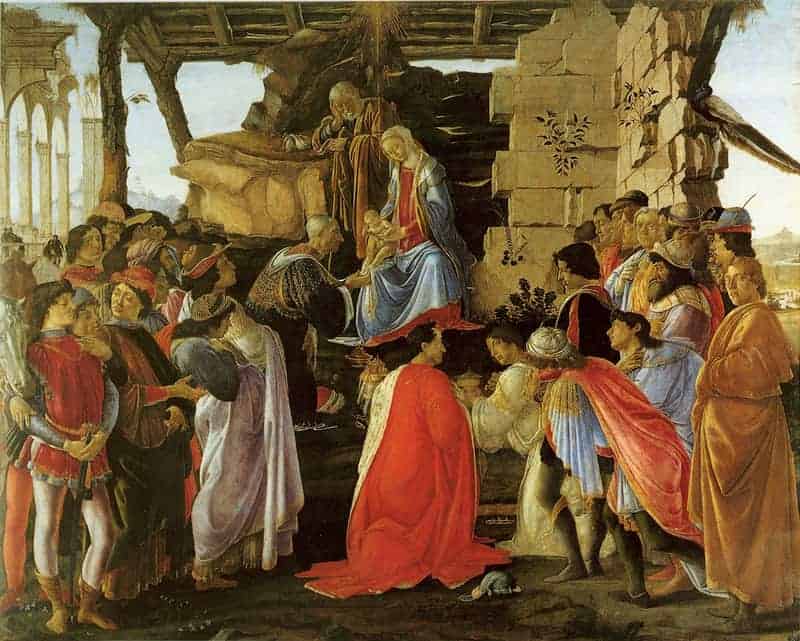 Abortion Of The Magi was made in the year 1476, depiction of a famous scene, where the three Magi, or kings, bring gifts of gold, frankincense, and myrrh to lay before a baby Jesus.  The work shows how the three men kneel before the holy family. It also contains a number of prominent figures of the Florentine society, such as Cosimo de Medici, the first of the Medici dynasty, Piero and Giovanni Medici (Cosimo’s sons), as well as Giuliano and Lorenzo (Cosimo’s grandsons).  You can also see a self-portrait of Botticelli himself, in a yellow robe on the far right-hand corner, staring directly at the observer.

As the name says this painting is an Abyss of hell. 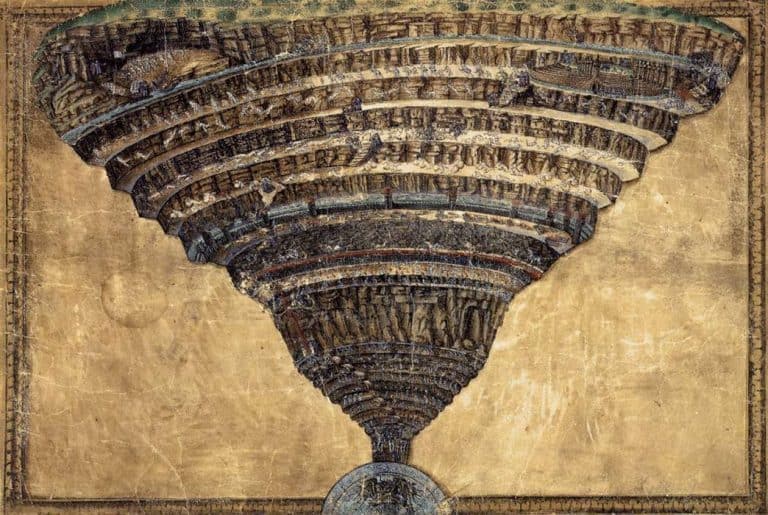 Map Of Hellwasmadein the year 1480. In this priceless piece, Botticelli visually represents Dante’s 14th-century epic poem “Inferno”. Dante envisioned hell as consisting of nine rings, all leading towards the center of the earth. Botticelli’s work, aptly illustrating Hell’s punishments in the gory details of an inverted cone, succeeds in imparting life to Dante’s narrative. Within the circles of hell, sinners atone for their sins.

A fine masterpiece of Lucrezia Donati by Botticelli. 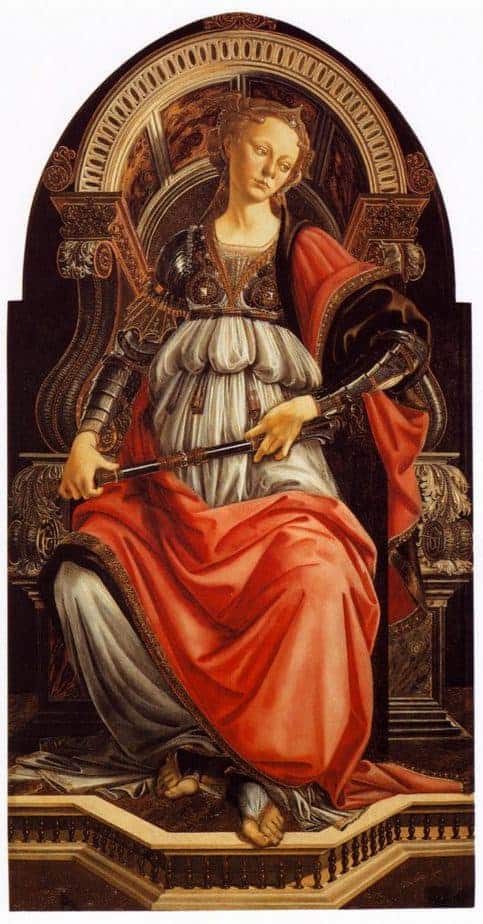 Allegory Of Fortitude was made in the year 1470. This work originally belonged to a set of seven panels representing Virtues, of which the other six panels are painted by Pietro Pollaiolo’s workshop. It was intended for the purpose of decorating the tall chair backs inside the Tribunal Hall of Piazza della Signoria in Florence. This work displays strength in showing a young woman, holding a scepter and gazing pensively to her left side. IS also in the list of Famous Botticelli Paintings.

Mars the god of war trying to wake the roman goddess venus.

Mars And Venus were made in the year 1483. The Roman goddess Venus lies asleep and unaware, while the god of war, Mars remains alert, calmly gazing at the four satyrs that play amidst themselves and try to wake Venus. It is quite noteworthy for using members of the Medici family like the youngest Giuliano di Piero de Medici as models.

Madonna Of The Magnificat 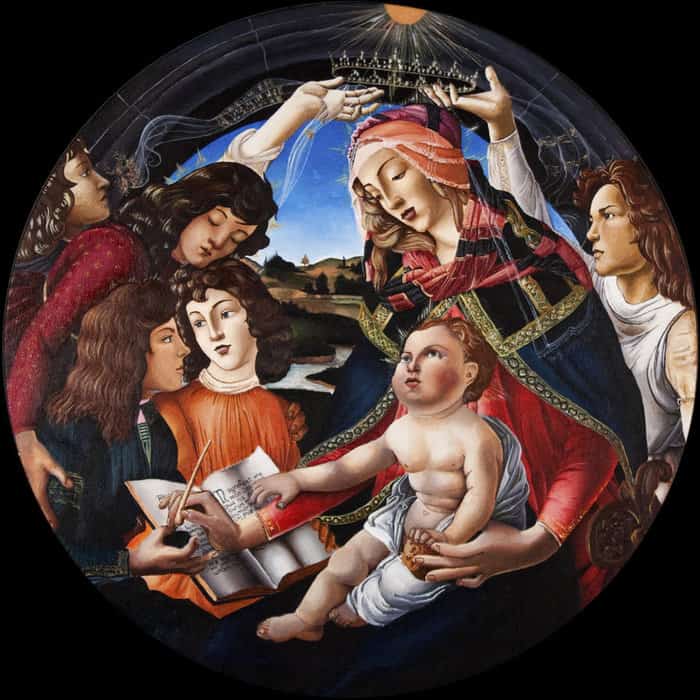 Madonna Of The Magnificat was made in the year 1481. This religious artwork created in a circular form shows Holy Mother Mary looking solemnly at baby Jesus and writing a book. Due to the use of gold paint in varied details such as Mother Mary’s crown, it accounts for being the most expensive condo (circular artwork). Is also a part of Famous Botticelli Paintings.

The Virgin Mary kneeling before Christ Child, in the presence of the shepherds and wise men with three angels embracing three men, while seven devils flee to the underworld. 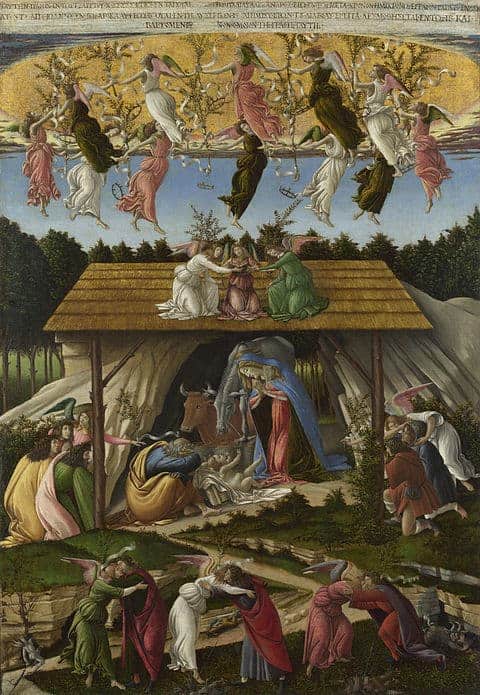 The Mystical Nativity was made in the year c.1500. Botticelli built up the image using oil on canvas. It is his only signed work and has an unusual iconography for a painting of the Nativity. When it was exhibited in 1857 in Manchester, more than a million people viewed it, and slowly his artworks began to receive considerable attention in Italy. One of the most Famous Botticelli Paintings 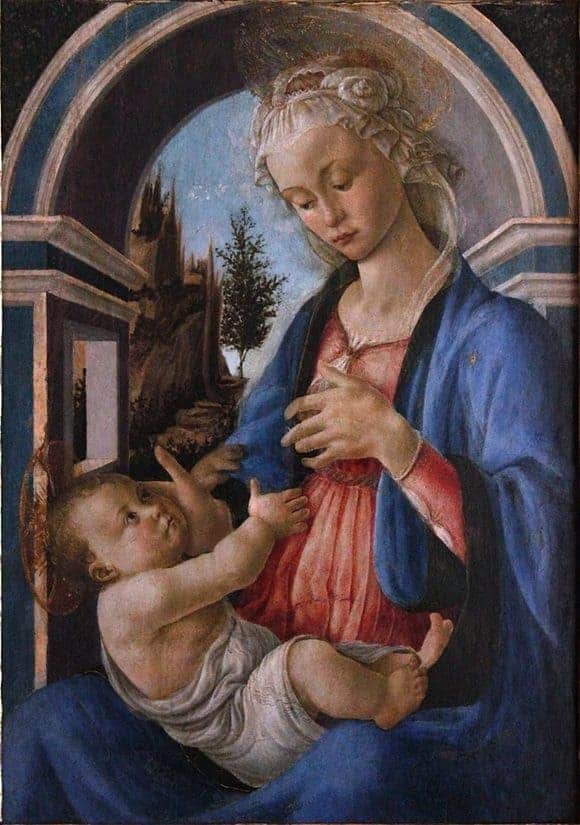 Madonna And Child were made in the year c.1467. This tempera painting enlists Madonna’s unique appearance her sweet youthfulness being tinged with a gentle melancholy including the careful detailing of her scarf and dress. The painting shows all the elements of Botticelli’s mature poetic a delicate, elegant linearity, a style which is still far from the intense pathos of his late work.

Angel Gabriel positioned beside the bed-chamber of a kneeling virgin. 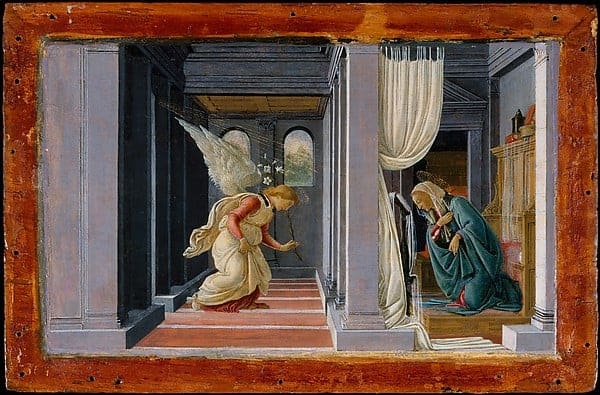 The Annunciation was made in the year 1490. One can see Angel Gabriel positioned beside the bed-chamber of a kneeling virgin in this painting, and we notice the row of panels dividing the space in-between them. This technique uses a one‑point perspective that succeeds in establishing the illusion of depth as one can see.

Newer What is Art? Why is Art Important?
Back to list
Older 9 Most Experimental Artworks By Kusama Yayoi
close