The paintings ranged from watercolors, pastels, and drawings. His work molded the Impressionist artist and encouraged the Symbolist movement.

The Barque Of Dante 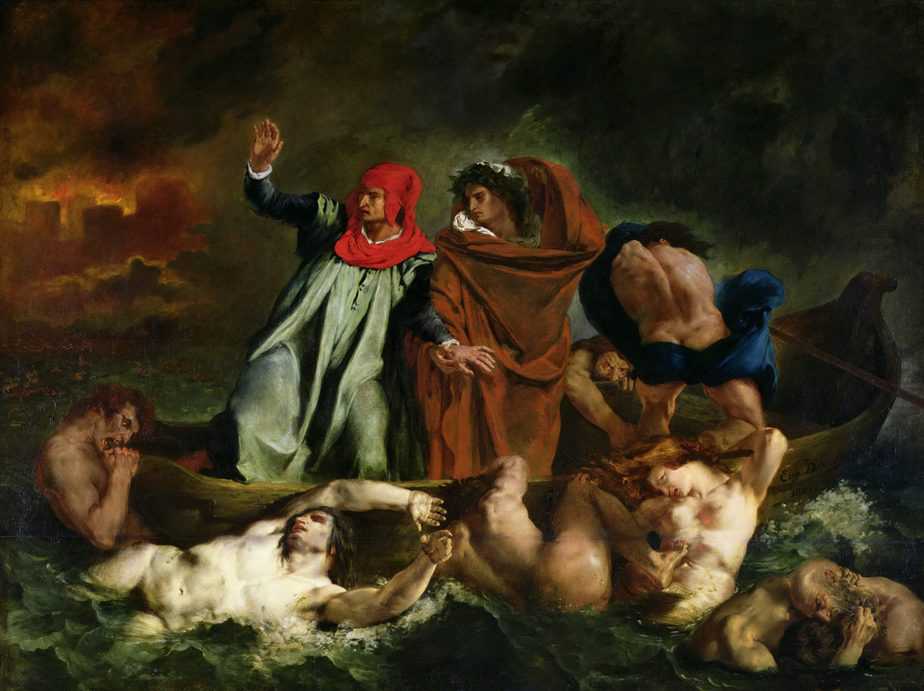 The Massacres At Chios The massacre at Chios is a Famous Eugene Delacroix Paintings done in 1824.

It is an oil painting. In the forefront, there is a group of distressed Greek men, women, and children laying clustered on the ground of which some dead and some are barely alive. On the left, a man dies from a stomach wound while his wife leans on his shoulder. On the right, a dead mother leans against an old woman as her child tries to suckle at her exposed breasts. In the background, the other people are involved in the battle in the distressing scene as the ocean meets the horizon. Also a part of Famous Eugene Delacroix Paintings. The Death of Sardanapalus is a painting by Eugene Delacroix done in 1827.

This painting represents the dramatic historical event of the last suicidal moments of Assyrian King Sardanapalus. The king had ordered the destruction of all his possessions during the siege of his palace. Instead of being defeated, he preferred to die. The artist chose to depict the moment just before his suicide which is more extravagant. 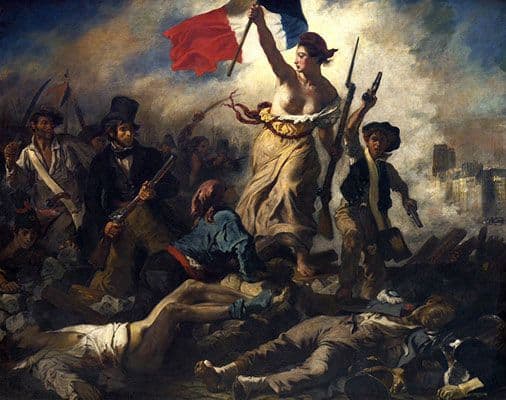 Liberty leading the People is a painting by Eugene Delacroix done in 1830.

This painting represents people of various ages charging across a land littered with dead bodies. In the middle, pacing over a pile of corpses is a bare-breasted woman who holds a rifle in her left hand and a French flag in the right, while she looks to another side. On her right are two men, with one in a white shirt wielding a saber running beside a formally dressed man with a black jacket, tie, and top hat holding a musket. On her left is a young boy wielding two guns. The backdrop is filled with smoke and destruction, and a barely visible silhouette of Paris.

The Women Of Algiers In Their Apartment The Women of Algiers in their Apartment is a part of Famous Eugene Delacroix Paintings done in 1834.

In this painting, three Algerian women are wearing brightly colored clothes sitting casually on the floor of a richly decorated interior. The woman on the left rests on a pillow and stares towards the spectator while the other two women turn their heads towards each other as if involved in a talk. On the far-right side, a black female servant walks by with her back to the spectator with her head turned towards the women on the floor. Is

Christopher Columbus And His Son At La Rabida 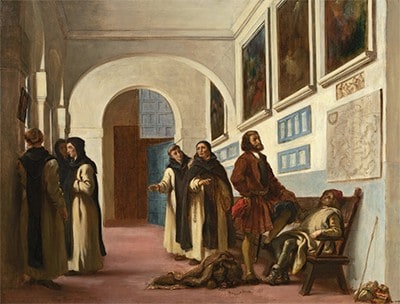 Christopher Columbus and his Son at La Rabida is a painting by Eugene Delacroix done in 1838.

The painting represents a casual meeting in which Christopher Columbus and his son, Diego are meeting the local religious people. Columbus stares at a map hanging on the wall while the remaining characters discuss pertinent topics of that time in small groups. The architecture is precisely reconstructed with beautiful arches.

Basket Of Flowers Overturned In A Park Basket of Flowers overturned in a park is a painting by Eugene Delacroix done during 1848-49.

In the later years of his career, Delacroix turned more to nature for his inspiration. This painting is important as the artist had created sketches of trees, plants, and flowers throughout his career this was his first recognized flower painting. This isn’t like traditional still life; the setting is a lush outdoor garden complete with green shrubs and trees. The painting landscapes a straw basket turned on its side and trails to the right, forming a kind of forestage arch. On left there is a red blossoming bush with colorful flowers on another bush in the right middle ground. Apollo Slaying the Serpent is a painting by Eugene Delacroix done during 1850-51.

This painting is a ceiling painting, which represents a story from mythology in which the God Apollo shoots arrows at the giant serpent Python while riding his chariot. The dying creature squirms in the sea below while a blast of smoke escapes his mouth. Other gods are seen in the sky including Apollo’s sister Diana. She is positioned behind him holding his quiver along with other gods like Hercules, Mercury, Minerva, and Vulcan. Rain clouds are being sent in by Boreas and the Zephyrs. The battle is being watched by Juno, Venus, and Ceres.

Horse Frightened By A Storm 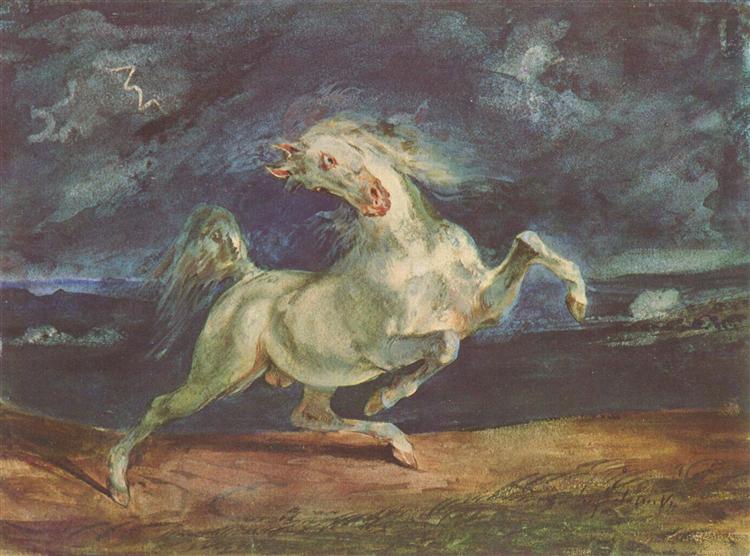 Horse Frightened by a Storm is a painting by Eugene Delacroix done in 1824.

It is a watercolor painting. It shows a fright by the lightning nearby the seashore. The landscape and the stormy sky provide a gloomy scene for the distressed, rearing horse. The lighting lights a stormy, blue sky framing the surprised animal. The scared look and red eyes draw the spectator into the raging surroundings of the horror-stricken horse.

Christ On The Sea Of Galilee Christ on the Sea of Galilee or Christ Asleep During the Tempest is a painting by Eugene Delacroix done in 1853.

The painting is based on a story from the New Testament. It depicts a sleeping Jesus in a furious sea. He is wearing a white gown and a blue robe wrapped around his head with a halo of golden light surrounds his head as he rests calmly with his head in his hand at the end of a rowboat. In the meantime, a group of hysterical men struggles to get control of their vessel on the storm-stirred sea. The man in the center throws his hands in the air in a signal of helplessness. To his left, another man reaches out to clutch an oar that has slid away. Lion Hunt is a painting by Eugene Delacroix done in 1861.

This painting is an intense and a bit chaotic scene that represents a group of Arab men leading an attack on two lions. To the left, a rider and his horse have been knocked down by a female lion. Another person attempts to spear the lion from the back. In the backdrop, at the peak of the loose pyramid formation, other huntsman dashes towards the chaos with sword raised. In the center forefront and on the right four more men are attempting to kill a male lion, who has been trapped by one of the hunters under his enormous paws.

Two Knights Fighting In a Landscape 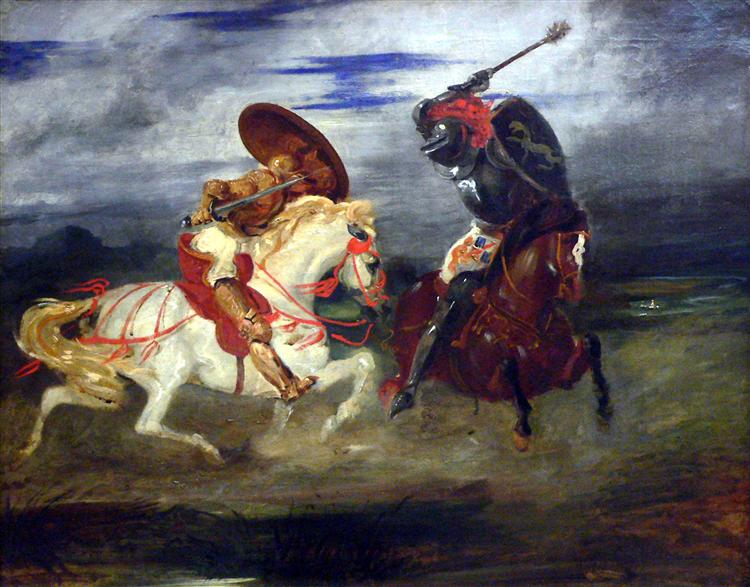 Two Knights Fighting in a Landscape is a painting by Eugene Delacroix done in 1824.

It is an oil painting that represents two knights fighting with each other in a vast, open landscape. One knight is dressed in golden armor and is riding on a white horse. The other knight is dressed in silver armor on a brown horse. The lively colors of the characters and the animals stand out to the watcher against the landscape. The artist focused on the movement of the knights and the animals by capturing minute details like the dust coming out of the soil.

The Orphan Girl At The Cemetery 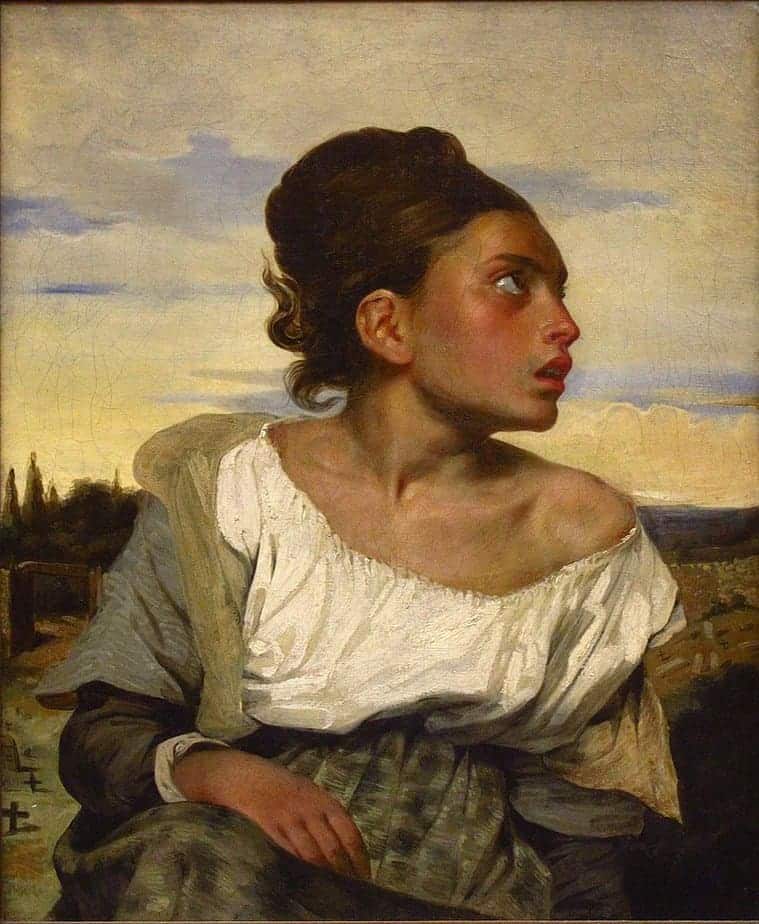 The Orphan Girl at the Cemetery is a painting by Eugene Delacroix done in 1824.

This is an oil painting that is considered to be a masterpiece in its own capability. The air around is filled with sorrow and anxiety resonates from the picture. The girl has tears in her eyes as she is grief-stricken. The dimness of the sky and the abandoned ground are in agreement with her expression of gloominess. The attire and the body language of the girl suggest tragedy and vulnerability.

Macbeth And The Witches 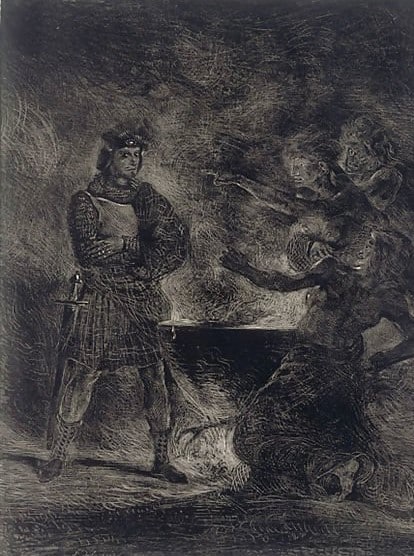 Macbeth and the Witches is a painting by Eugene Delacroix done in 1825.

It is based on the plays Shakespeare, Macbeth. It shows smoke coming out of cinders and a bubbling cauldron. Light from the fire illuminates Macbeth while the witches fade into a rather smoky background. It is a representation of act 4, scene 1 which has the famous lines, “toil and trouble, fire burn, and cauldron bubble,” which increases the dramatic impact. 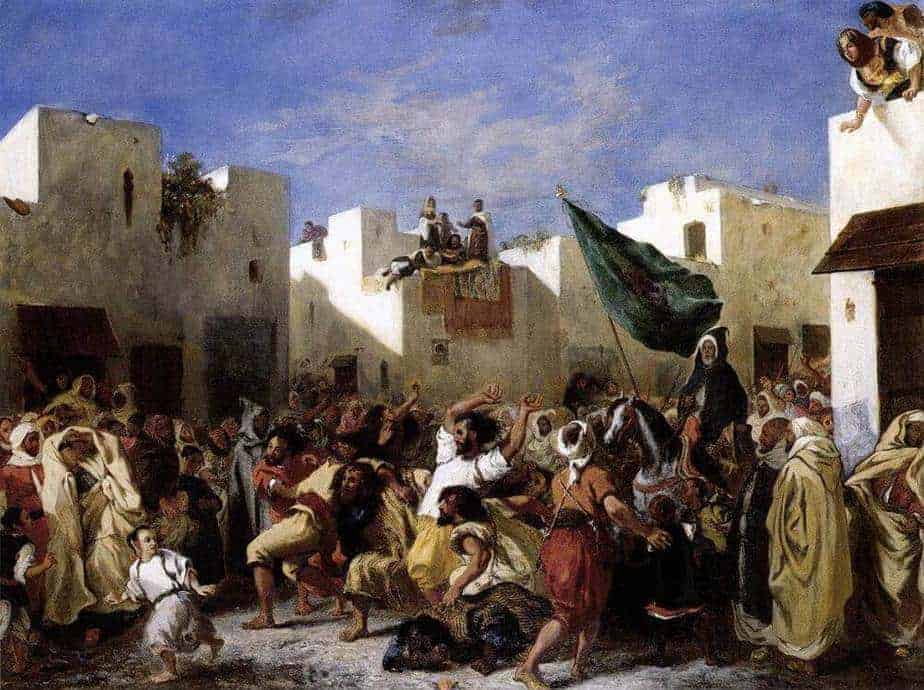 Fanatics of Tangier is a painting by Eugene Delacroix done during 1837-38.

The painting is a prime example of the Romantic style of the early 19th century. It is based on an event that was first-hand experienced by the artist. It is a devotional exercise of the Isa was and the dedicated Muslim sect as they crowded the streets of Tangier in 1832.

These are some of Famous Eugene Delacroix Paintings a French Romantic artist. He was considered the leader of the French Romantic school. He was a prolific artist, who produced over 9000 work during his lifetime. Do want to know why to study art history.

The Renaissance was a period in European history from the 14th to the 17th century. First, the movement started as a cultural movement ...

END_OF_DOCUMENT_TOKEN_TO_BE_REPLACED

An Art-Lover’s Guide to Florence: The Heart of Renaissance Creativity

Florence is beautiful. Few time periods create the image of a magical artistic utopia like the Renaissance. Taking place from the 14...

END_OF_DOCUMENT_TOKEN_TO_BE_REPLACED

Leonardo di ser Piero da Vinci widely known as Leonardo da Vinci was an Italian Renaissance polymath who was born on 15 April 1452 in A...