Roman art spans the centuries of the Republic and of the later Empire that governed the lands of the Mediterranean, Europe, and the British Isles from antiquity until the beginning of the Dark Ages. This article contains 15 of the most famous Roman paintings.

The beginnings of Roman art in relation to date on not entirely clear as Rome existed in the days of the Etruscans and once Rome took hold of Italy still needed time to firmly establish a culture. When Rome achieved victory in the Punic wars they were finally confident enough to feel pride in their culture and began to create rather trade or buy.

The Roman artwork refers to visual arts made in Ancient Rome and in the territories of the Roman Empire. Romanesque artwork is widely admired around the world.

Portrait of the Four Tetrarchs 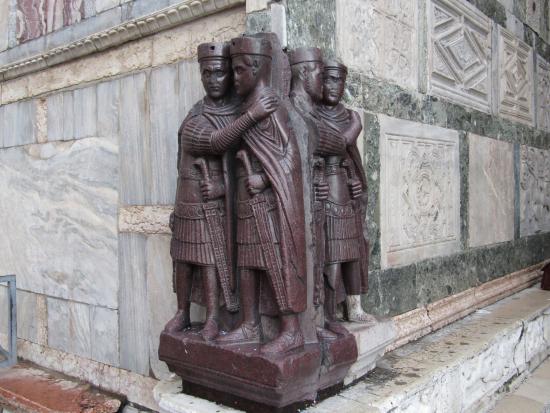 Portrait of the Four Tetrarchs

Portrait of the Four Tetrarchs is a porphyry sculpture produced around 300 AD. The sculpture consists of a group of four Roman emperors. The sculpture can be viewed at St Mark’s Basilica in Venice in Italy. 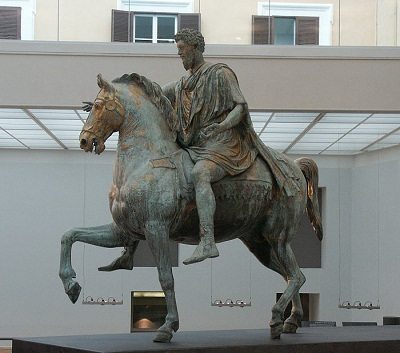 Equestrian Statue of Marcus Aurelius is an ancient Roman statue. It depicts Marcus Aurelius riding a horse. The statue is made up of bronze and the height of it is 4.24m. It can be viewed at Capitoline Museums in Rome, Italy. 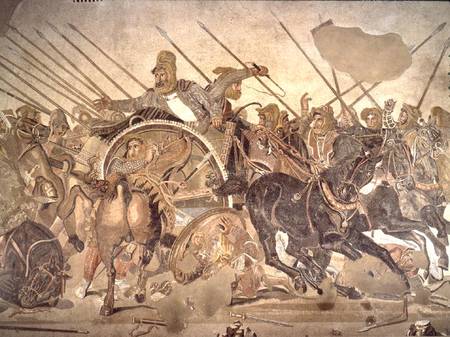 One of the famous roman paintings – Alexander Mosaic is a roman floor mosaic developed around 100 BC. This painting depicts a battle between Alexander the Great and Darius III of Persia. It can be viewed at the National Archaeological Museum in Naples. 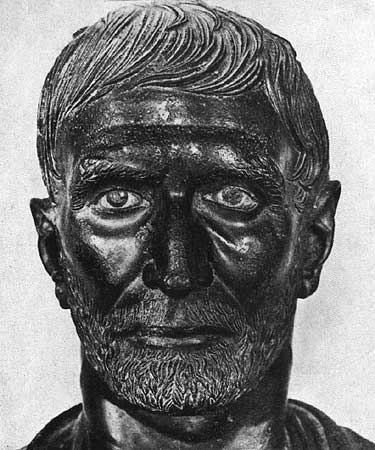 Capitoline Brutus is an ancient Roman bust. It depicts the Roman consul Lucius Junius Brutus. The bust is made up of bronze and is 69 cm in height. The bust is currently located at the Hall of the Triumphs within the Capitoline Museums in Rome. 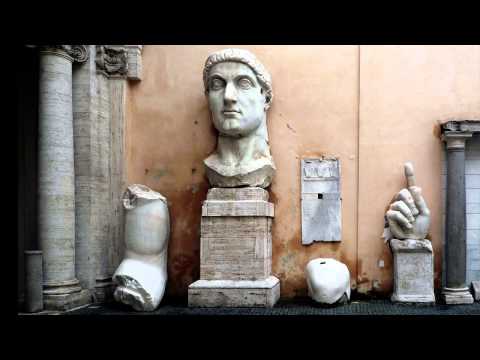 Colossus of Constantine is a huge acrolithic statue. It depicts a roman emperor Constantine the Great. The statue can be viewed at the Courtyard of the Palazzo dei Conservatori Musei Capitolini in Rome. 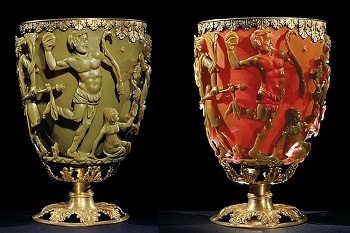 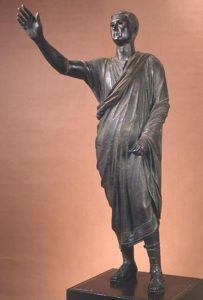 The Orator is a sculpture made up of from bronze and it is 179 cm in height. It depicts an Etruscan man, Aule Metele who is shown wearing a short Roman toga and footwear. Aule Metele is raising his hand in the sculpture showing that he is the orator. 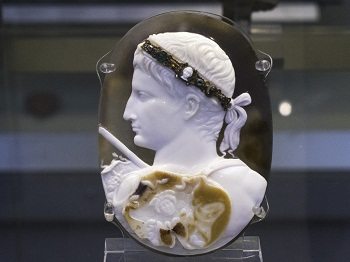 Blacas Cameo is a large Ancient Roman cameo which shows the profile head of the roman emperor Augustus. It was created probably in AD 20 to 50 when Augustus died in AD 14. Blacas Cameo can be viewed at British Museum. 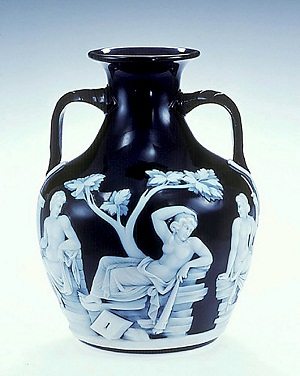 Portland Vase is a Roman cameo glass vase produced around 1 to 25 AD. This piece is known as the best roman cameo glass which can be viewed at the British Museum in London. The glass vase is about 25 cm in height and 56 cm in circumference. 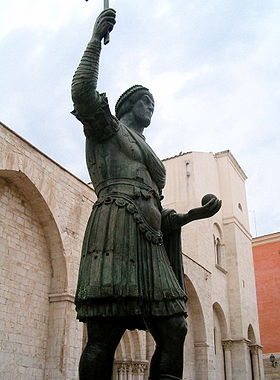 Colossus of Barletta is a large statue made up of bronze of height 5.11 meters. The identity of the man in this statue is still unknown and is assumed to be Heraclius or Theodosius II etc. It can be viewed at the Barletta in Italy. 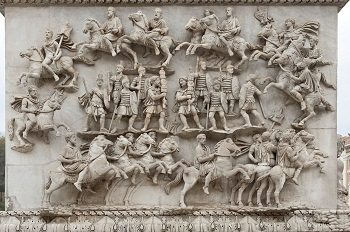 Column of Antoninus Pius is a roman honorific column developed in 161 AD. It was constructed using the red granite. The column is about 14.75 meters in height and 1.9 meters in diameter. It can be viewed in Rome, Italy. 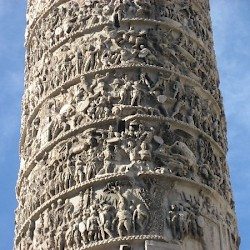 The column of Marcus Aurelius

Column of Marcus Aurelius is a roman victory column which features a spiral relief. The column was built in honor of the Roman emperor Marcus Aurelius. The original inscription has been destroyed over the years. This column can be viewed at Piazza Colonna in Rome, Italy. 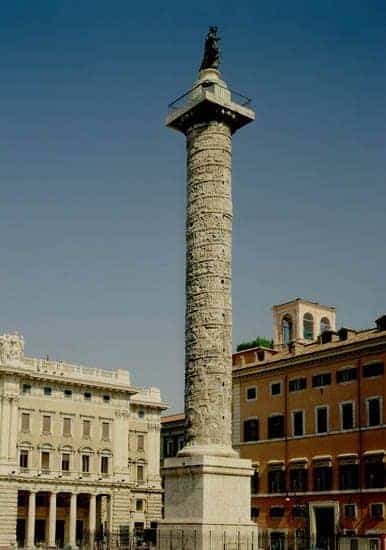 Trajan’s Column is a roman triumphal column. The column is a symbol of the Trajan’s victory in the Dacian Wars. Trajan was a roman emperor who ordered this column to be made under the supervision of Apollodorus of Damascus. It can be viewed in Trajan’s forum in Rome, Italy. 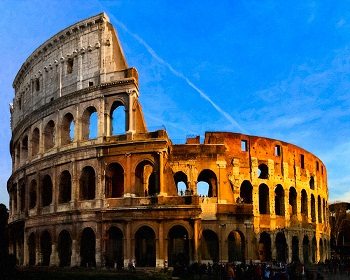 Colosseum is an oval amphitheatre which was completed during 80 AD. It is also known by the name of “Flavian Amphitheatre”. The Colosseum estimated to hold around 50,000 and 80,000 spectators at one time. It is located in Rome, Italy.

The Great Cameo of France 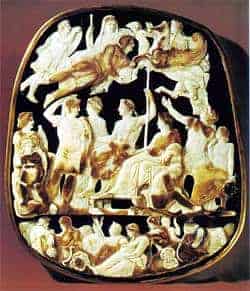 The Great Cameo of France

The Great Cameo of France is a five-layered sardonyx cameo that could have been completed around 23 AD. It is regarded as one of the greatest and largest roman cameos that survived to date. It can be viewed at the Bibliothèque National in Paris. The dimension of the painting is 31 cm by 26.5 cm.

Egyptian art is known for its symbolic, stylized, and use a myriad of media to vividly express their belief systems, wealth, power, and...

END_OF_DOCUMENT_TOKEN_TO_BE_REPLACED

This article features 10 of the most famous Gothic art. Gothic art was a style of medieval art that developed in Northern France out of...