Yayoi Kusama, born in 1929 in Matsumoto, Japan, is a Japanese artist who is knowns as ‘the princess of polka dots’.  Although Kusama makes lots of different types of art – paintings, sculptures, performances, and installations – they have one thing in common, DOTS! Let’s check out nine experimental artworks of Kusama Yayoi.

The watercolor depicted as a singular biomorphic form with subtle dots in the center floating in a seemingly black abyss. 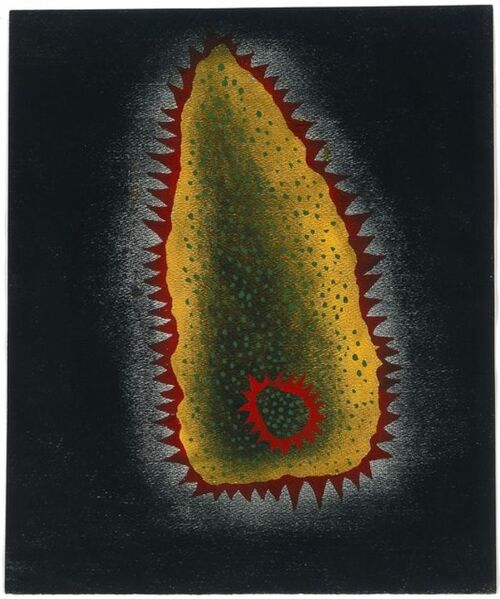 The Woman was made in the year 1953. This artwork is reminiscent of female genitalia with red spikes surrounding it. The overall effect of the work is aggressive and bizarre and it shows the signs of Kusama’s struggles with mental illness and anxiety towards sex. This was Kusama’s attempt to represent what she believed to be her alternate reality. Is one of the Experimental Artworks.

The bluish-grey underlay obscured by small, white semi-circles, which consume the entire canvas. 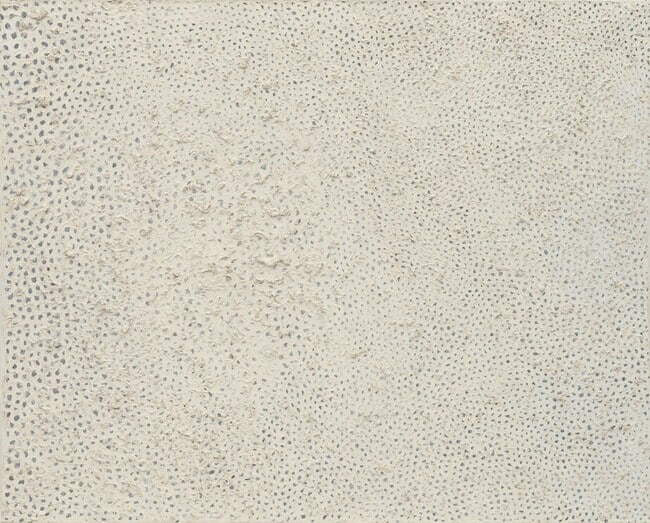 No. F was made in the year 1959. No F was one of the infinite Net series artwork. From a distance, the subtle painting looks delicate and monochromatic, but when viewed up close, the complexities of the canvas’s surface become apparent. Although these time-consuming and obsessive nets were painstaking to create, they were quite therapeutic for the artist. 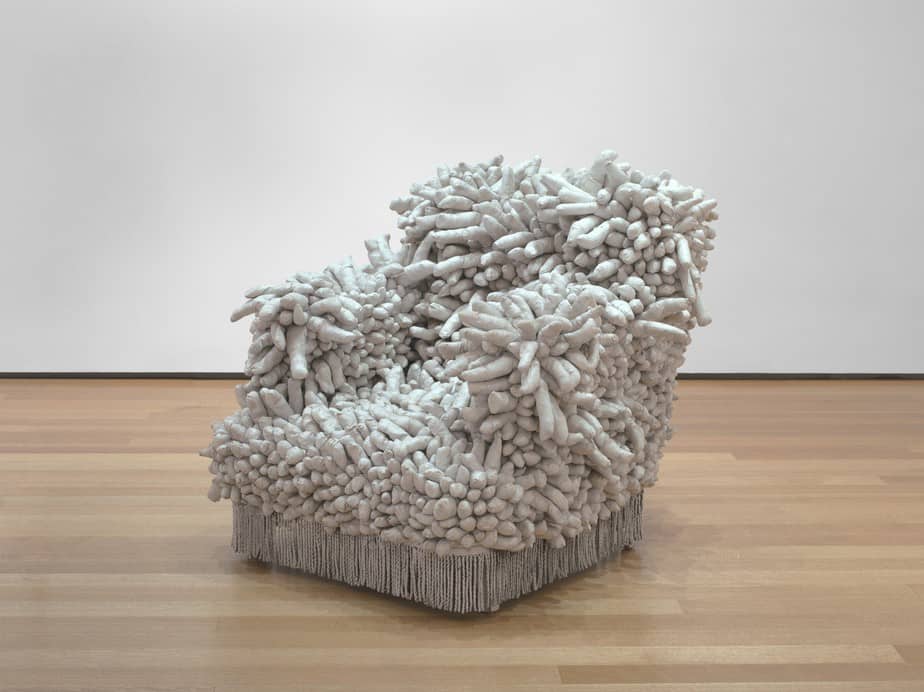 Accumulation No.1 was made in the year 1962. This art was one of the first in Kusama’s iconic Accumulation series, in which she transforms found furniture into sexualized objects. The menacing piece works to confront Kusama’s sexual phobias and it’s both aggressive and humorous. These psychosexual works by Kusama proved to be a significant precursor to post-minimalist art. Is also one of the Experimental Artworks 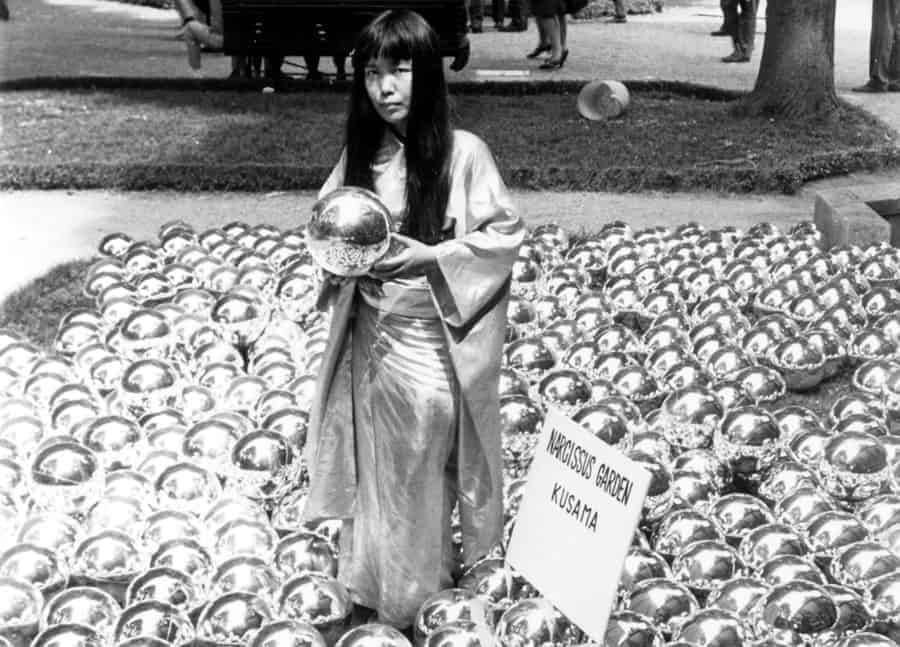 Narcissus Garden was made in the year 1966, it was Kusama’s first successful experiment with performance art. The twelve-inch in diameter 1500 mirrored balls are tightly arranged, creating an infinite reflective field that distorted images of reality on the surface of the balls. The main theme of this art is that the viewer is forced to confront their own vanity when looking at their distorted reflection on the surface of the balls.

Nude performers dancing to the rhythm of bongo drums. 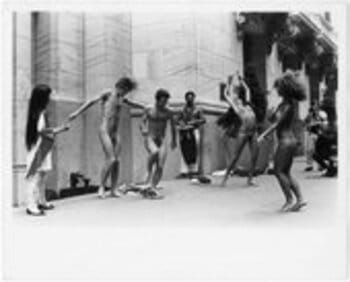 Anatomic Explosion on Wall Street was made in the year 1968. The work featured nude performers dancing to the rhythm of bongo drums while Kusama, who called herself ‘Priestess’, painted blue dots on their naked bodies and presided over the event. This performance was in opposition to the Vietnam war.

Yellow pumpkin sculpture painted with rows of black dots fanning out from large to small around the gourd. 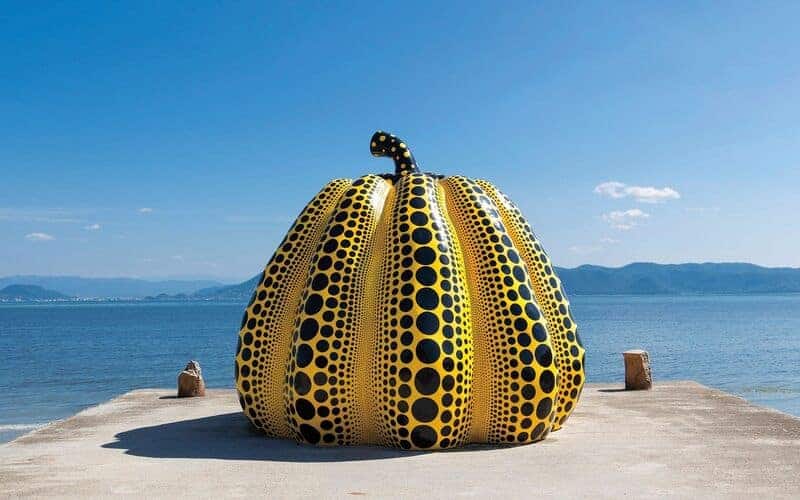 Pumpkin was made in the year 1994. the pumpkin’s big scale and bulbous gives it a kind of cartoonish appearance. Kusama has described the pumpkin motif as an alter ego, once again emphasizing how her work and identity are intrinsically intertwined.

A pristine room along with furniture and an explosion of colorful dots. 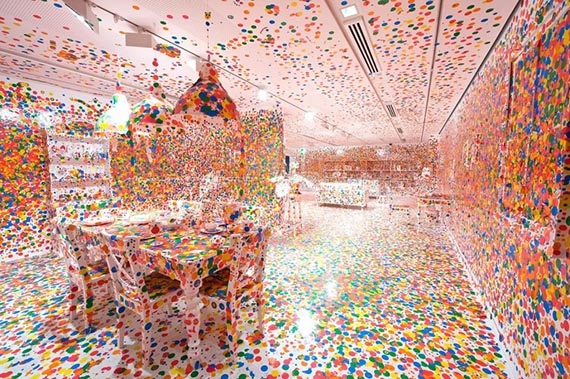 Obliteration Room was made in the year 2002. It starts out as a blank canvas, to resemble the interior of a domestic environment, the walls, ceiling, floor, furniture everything is painted sterile white. Visitors to the room are handed a sheet of round stickers of various shapes and sizes determined by Kusama and are free to affix them in any way and on any surface of the room. Is one of the most Experimental Artworks of Yayoi Kusama.

Infinity Mirrored Room- The Souls of Millions of Light Years Away

Dark chamber-like place completely lined with mirrors with small LED lights hung from the ceiling and flickering in a rhythmic pattern. 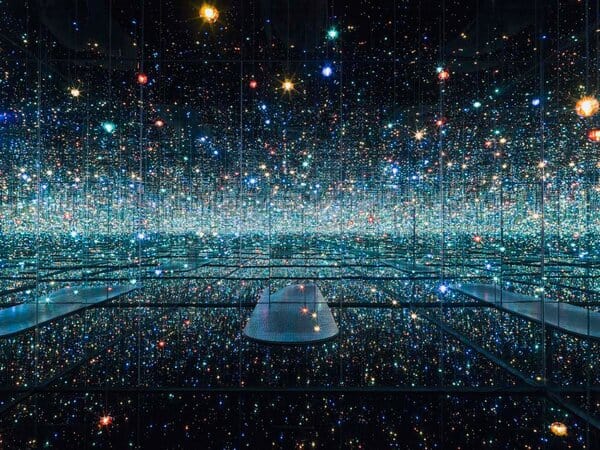 infinity Mirrored Rooms- the souls of millions of light-years away was made in the year 2016. It is one of the infinity room series which started in the 1960s. This particular room consists of small LED lights hung from the ceiling and flickering in a rhythmic pattern creating pulsing electronic polka dots. The LED lights reflect through the mirrors to create an illusion. Only one visitor at a time can experience this installation.

The artist lying naked on her famous soft sculpture surrounded by macaroni pasta. 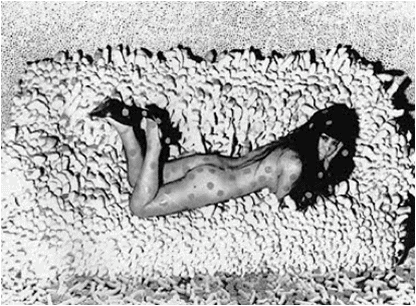 Sex Obsession Food Obsession Macaroni Infinity Nets & Kusama was made in the year 1962, one of the infinity sets, Kusama’s aim was to subvert her own discomfort in effect to conquer it, so she inserted herself into the piece to represent a manifestation of her sexual aversion. This brave presentation of herself in physical dialogue with her own fears positions Kusama as a participant in the burgeoning Feminist art movement of the time and also lets us know about her work in the late 1960s in which she used her body and the body of others in public performances.

These are some of the most experimental artworks of Yayoi Kusama. is a Japanese artist who is sometimes called ‘the princess of polka dots. Do you want to know the most famous realism paintings ever made?

Tags:
creativity, storytelling
Newer 10 Most Famous Botticelli-Paintings
Back to list
Older The Difference Between Modern and Contemporary Art