India is quite famous for its culture worldwide and the most important aspect of it is the art that is interwoven with it, and the country is home to quite wonderful artists who portray India’s culture quite beautifully. Let’s have a look at the famous art masterpieces ever made in India. 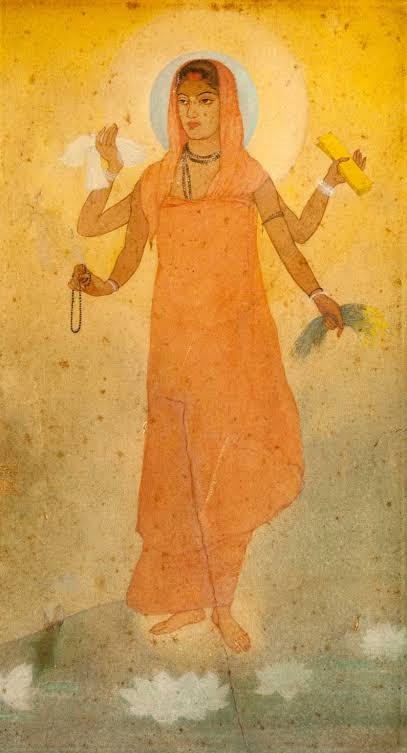 Bharat Mata is a painting by Abanindranath Tagore done in 1905.

This painting depicts a woman dressed in saffron like a sadhvi. The woman is holding a book, bundles of paddy, a piece of white cloth, and a garland in her four hands. It was painted keeping Swadeshi ideas in mind during the Indian Independence movement. It is one of the earliest representations of Bharat Mata or Mother of India. It is an emotional artwork as it awakens the goddess in women. It is not just a patriotic symbol but also a model that everyone looks up to. 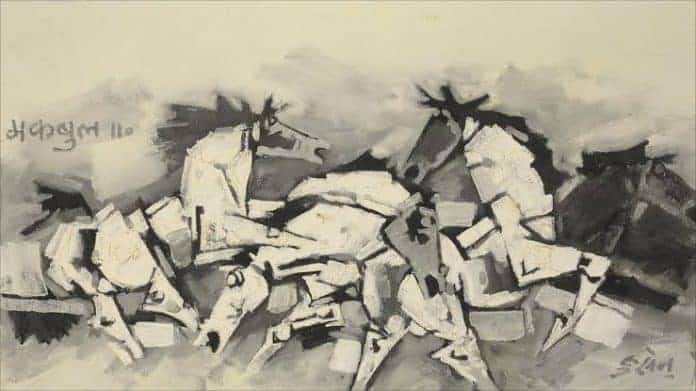 This painting shows three horses carefully intertwined in the work. The horses are galloping and being lush beside each other, representing energy and vigor. Their necks are arched gracefully with their strong heads held high. Their mouths resemble like that of a dragon’s depicting masculinity and wildness. The hinds are feminine making it a flawless combination of strength and elegance. This painting has a wide range of cultural inspiration and personal experiences.

Self Portrait By Amrita Shergill 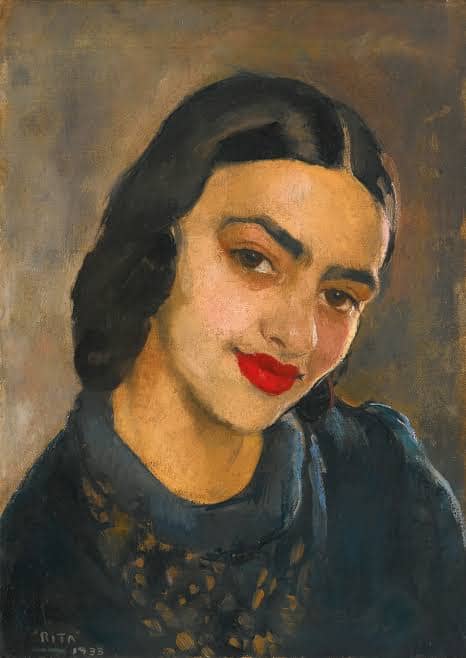 This is a Self-portrait by Amrita Sher Gill made in the year 1931.

Amrita Sher Gill is flaunted as India’s Frida Kahlo. This painting is one of the most famous paintings in India. This is one of the finest works of the artist’s phenomenal talent with brushes and color. This portrait is very prominent among India’s modern-day artists. This portrait is a glimpse of an 18-year-old Amrita. The ostensibly half-smiling lady stares with a passion so overpowering that it makes the viewer instantly keen on the melancholy that covers her inner self. 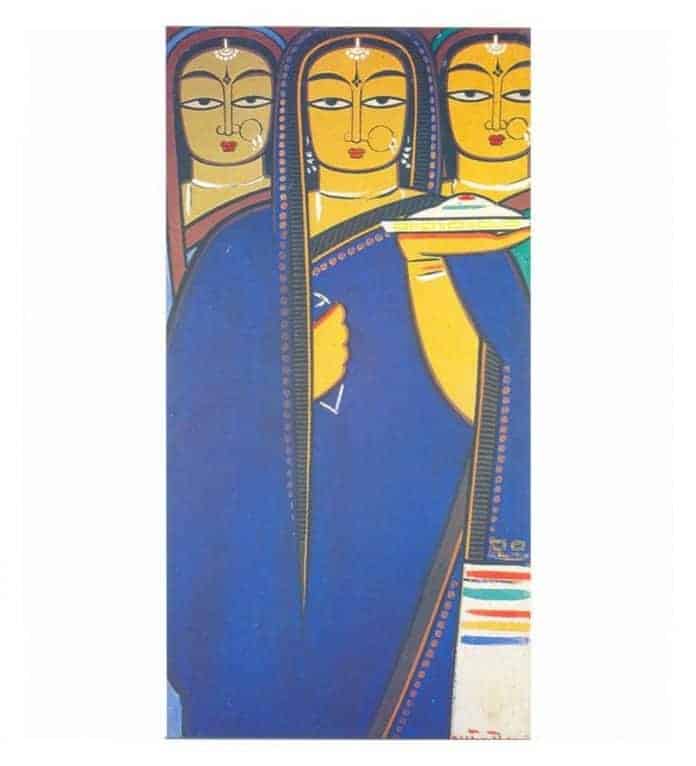 Three Pujarins is a painting by Jamini Roy.

This painting carries the spirit of India in every stroke. The painting is inspired by the folk art tradition of Bengal. This work by the expert remains immersed with a variety of vibrant colors that describe much of his work when the area of the hued reach remained prohibitive. Three Pujarins depicts three almond-eyed priestesses in a worshipping avatar. The painting is a striking visual spectacle with dominant blue and black contour lines. The classic indigo-colored Bengali style sarees also subtly depict the Indigo movement against the then British government. 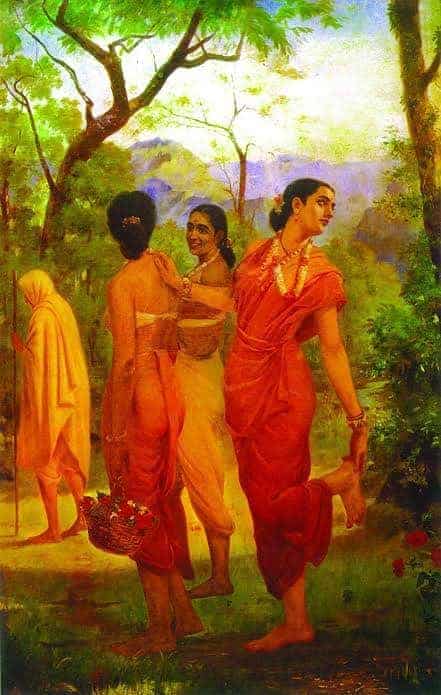 Shakuntala is a painting by Raja Ravi Verma.

It is an oil on canvas painting that depicts the love saga of Shakuntala and Dushyant. It shows a young Shakuntala very much in love who pretends to remove a thorn from her foot while trying to steal a glance of prince Dushyant, her lover. Although the painting doesn’t suggest it directly, it displays it through mannerisms and elegance instead of symbolism and figurative representation. The artist radiates the very heart of the universal feeling of love. The body language and gesture of the young Shakuntala revibrate with every other love who will recognize the shy pretense that she indulges in so flawlessly. 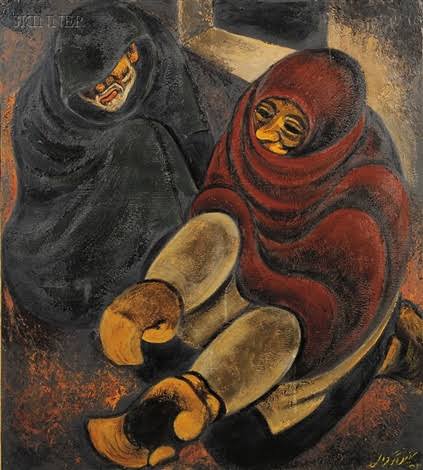 Days of Glory is a painting by Satish Gujral done in 1952.

Satish Gujral is an exemplary painter, whose most of the work draws from disturbing experiences of the Partition. He paints an impactful representation of the suffering that shook him to the core in this painting. As ironic it may seem of being reflective of the times of gore, the painting is a representation of all the emotions that engulfed the artist. The artist believes his works are the truth to be told of his sufferings more than they are of the Partition. The work depicts helplessness but not without pride. Even in such aggravation, the characters are hugely restrained in such a small space that speaks of the experience that concerned everyone. This is also a part of famous paintings of India. 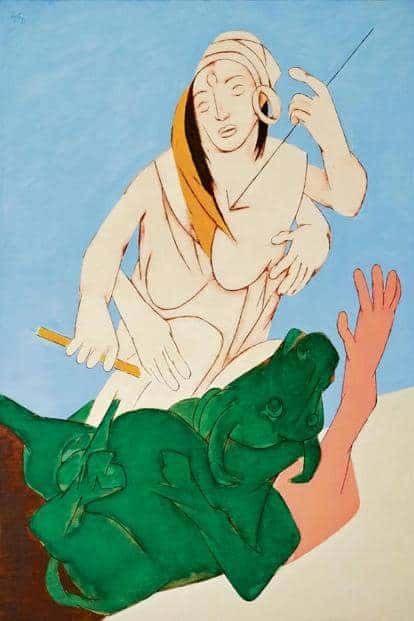 Mahishasura is a painting by Tyeb Mehta done in 1993.

Tyeb Mehta was one of the finest contemporary artists of India. The painting delivers a wonder as mythological and pertinent as the destruction of the demon by Goddess Durga in a very simple interpretation of form, color, and line. The main theme behind the painting is good versus evil. The core of the painting is ancient imagery, with modern work of creativity being vague in absence of any clearly defined lines that might suggest what is beyond the eye. There is no denying the brilliance exhibited by the artist in this famous painting.

Self Portrait by Rabindranath Tagore 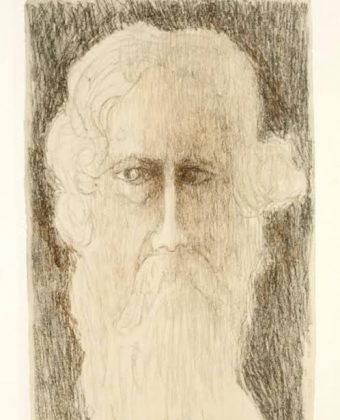 Rabindranath Tagore started taking painting seriously in the later years of his life. His self-portrait makes use of rude pencil lines to draw his full-bearded face with an enhanced silhouette, without color and background. It is a remarkable representation in self as well as in essence that there is no second guess as to why and how this is an undoubtedly glorious masterwork in simplicity. 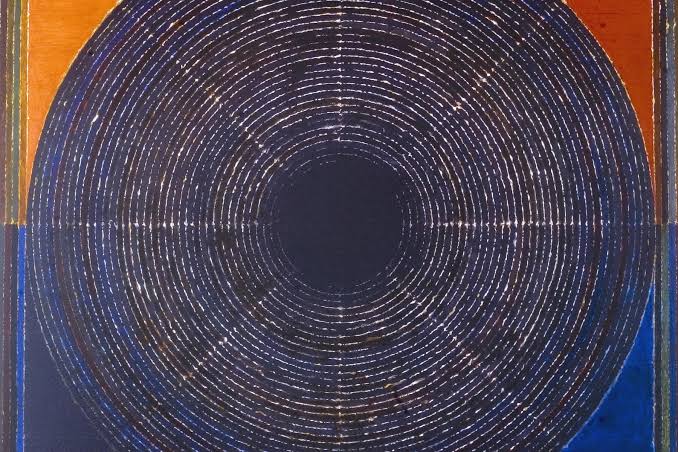 Bindu is a painting by S H Raza.

The painting has strong rooting in Indian culture as per the artist which shows the Bindu as a source of energy and life, that begins and achieves infinity from the focal point. It’s geometric enough to make it abstract but also sacred in its symbolism, the Bindu became a very prominent motif in his works, much like his other explored themes like the tri bhuj which also resided in geometry along with nature. Intricate to Indian philosophy, the Bindu is the point of all origin. This painting belongs to the list of the famous painting of India 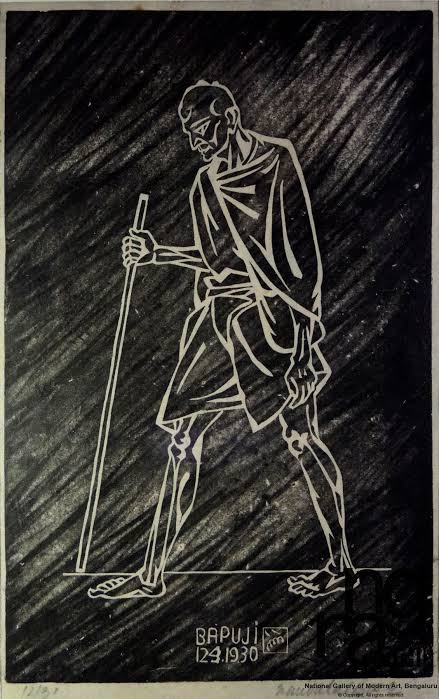 Bapuji is a painting by Nandalal Bose done in 1930.

It’s a painting of Bapuji Mahatma Gandhi, the face of the independence struggle of India. The artist is a Shantiniketan artist, which shows his fascination and respect for Gandhi. It shows the influence of the Father of the Nation had on the people but also of the exceeding nature of the impact that Gandhi had managed to create with his non-violent principles. It is a linocut portrait of Gandhi that remains one of the most iconic artistic representations of the 20th century. This also a part of famous paintings of India

Newer 12 Famous Paintings by Mark Rothko
Back to list
Older What is Art? Why is Art Important?
close