Wassily Wassilyevich Kandinsky is a well-known painter hailing from Russia, whose interest in spirituality throughout art was often professed.

In most of his artwork, Kandinsky made use of abstract expressionism but also had the rare ability known as synesthesia where he could see sounds and hear colors, a reality often reflected in his work.

Artwork by Kandinsky was dominated by action painting, and he labeled his works as either improvisations, formed by drizzling colors onto the canvas or as compositions, works he deemed to be more elaborate. 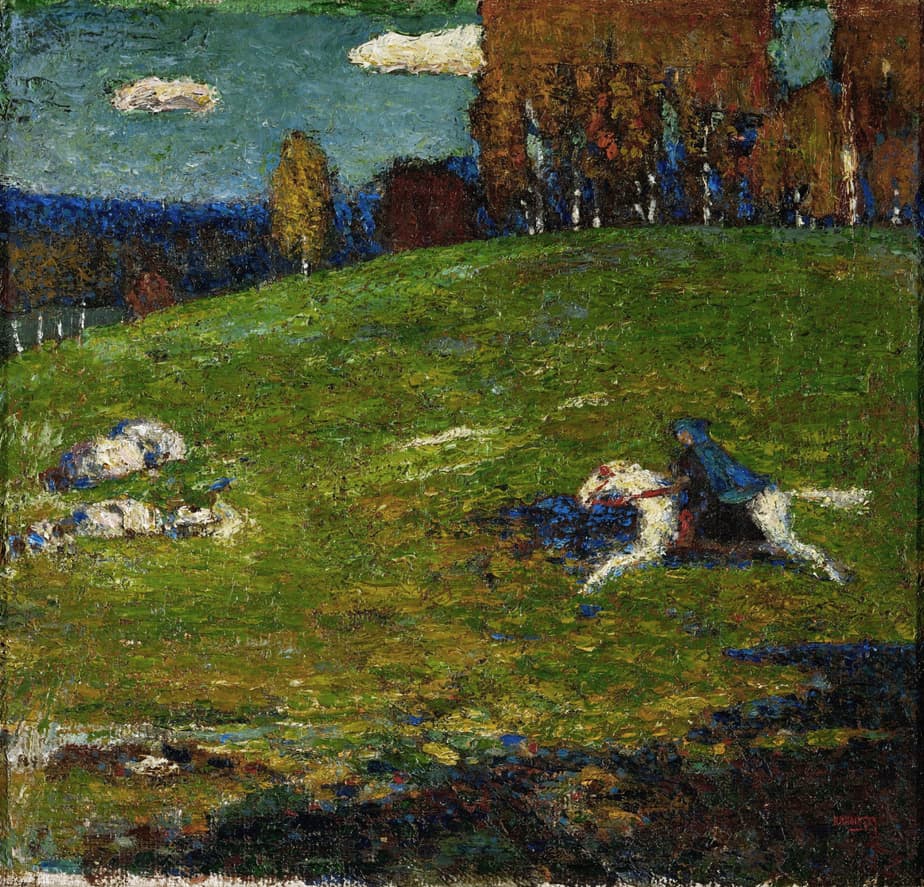 A work of oil paint on cardboard, this abstract expression known as Blue Rider was made in 1903 and displays a cloaked rider and their horse racing through meadows.

According to Kandinsky, the blue colors used are meant to represent spirituality.

Due to the abstract nature of the work, many have interpreted it in their own way with the speculation that the figure in the man’s arms must be a child, although truth be told, it may just be a shadow

2.Circles in a Circle 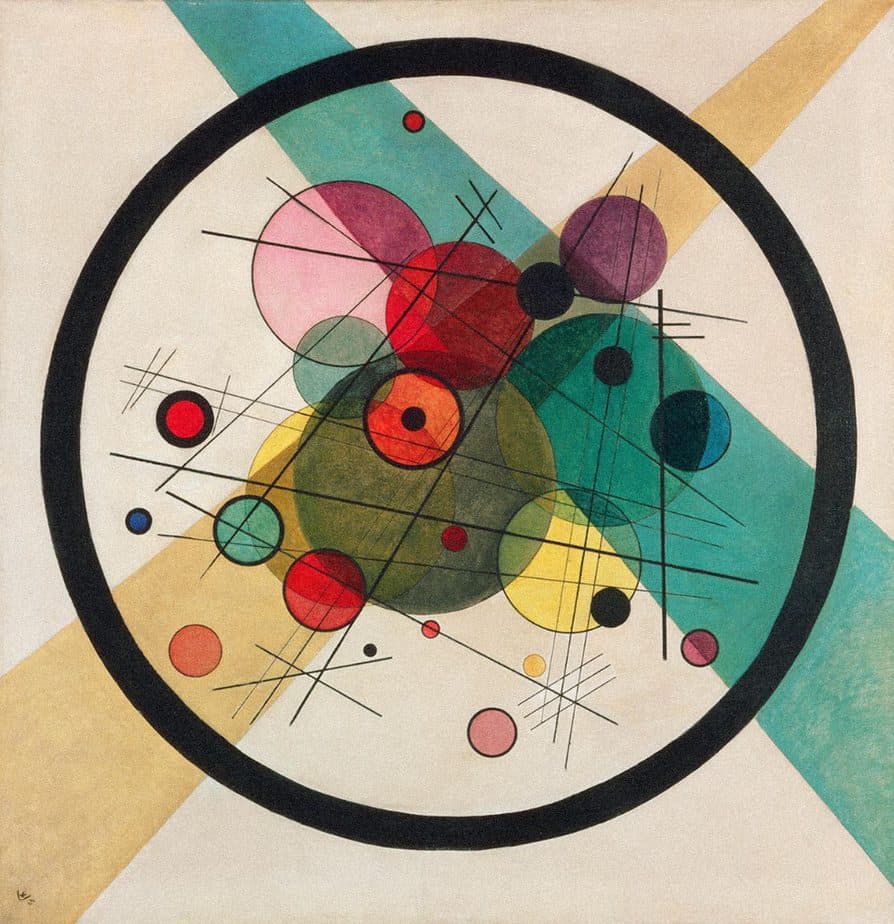 Completed in 1923, Circles in a Circle is an oil-on-campus piece of work that makes heavy use of geometric elements, a style known as geometric abstraction.

This provides a good example of how specific geometric shapes often dominated Kandinsky’s work. This painting in particular contains 26 circles intersecting with one another, with different colors and sizes, and all presented within one large, black circle.

According to Kandinsky, this piece of work represents cosmic harmony, with the combination of the opposites within the circle perfectly balancing one another. 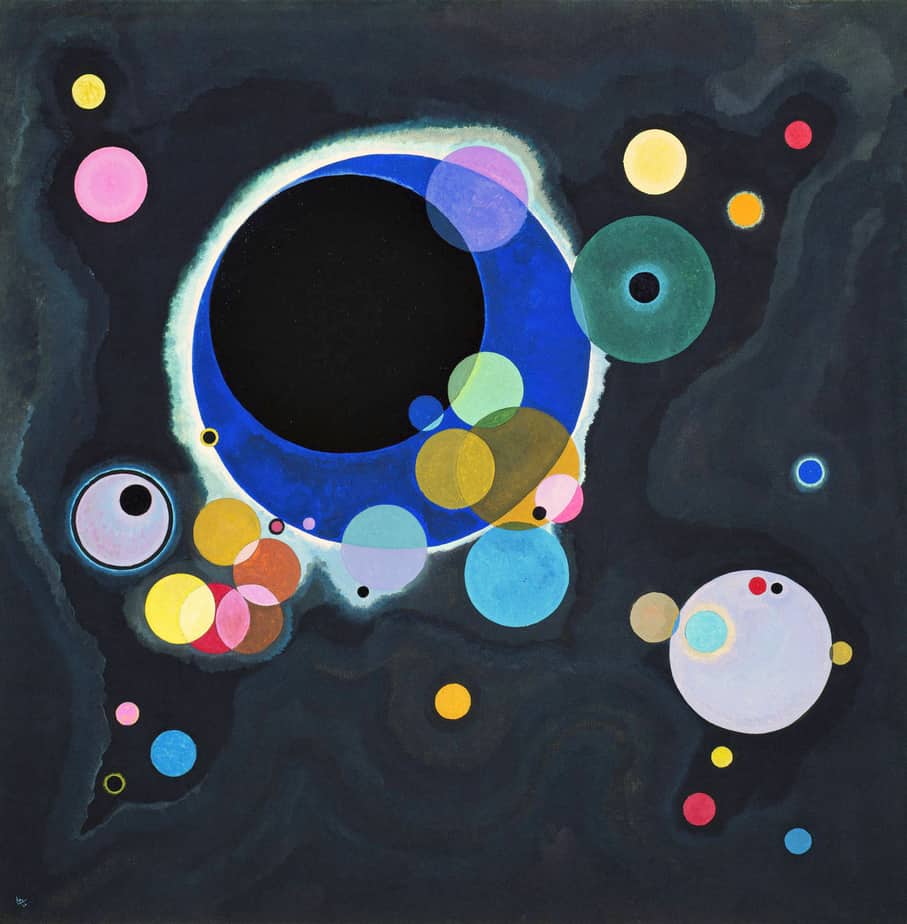 An oil-on-canvas painting, Several Circles is a piece of abstract art painted by Kandinsky in 1926 and as before, makes use of heavy geometric elements.

The variation in the color and size of the circles forms a feeling of abstraction in the work.

The circles themselves make use of a limited color palette and highlight well the Suprematism often on display in Kandinsky’s work, this being an art movement focusing specifically on basic geometric forms. 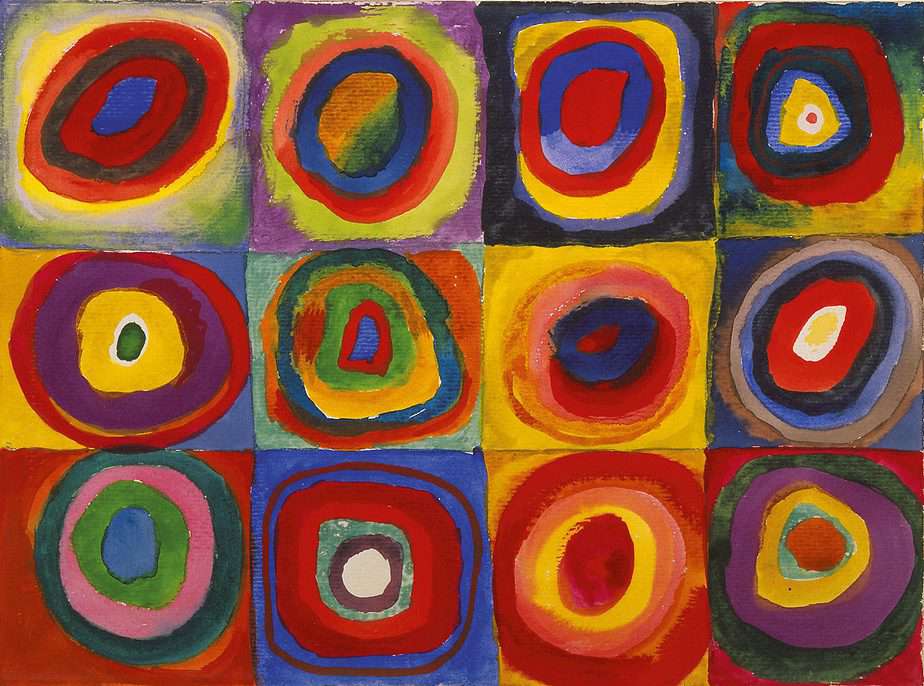 Certainly, by now the work of Kandinsky in Suprematism is well on display, and Squares with Concentric Circles is no different.

Completed in 1913, this abstract artwork was painted using watercolors, gouache, and crayon on paper. Due to the simplistic form of squares and circles, it exists as an excellent medium to teach kids about these geometric forms.

This piece of work is not just about the arrangement of the shapes but also a display of the artist’s unique synesthesia abilities in his work, providing the viewer a glimpse into the life of a person with synesthesia. 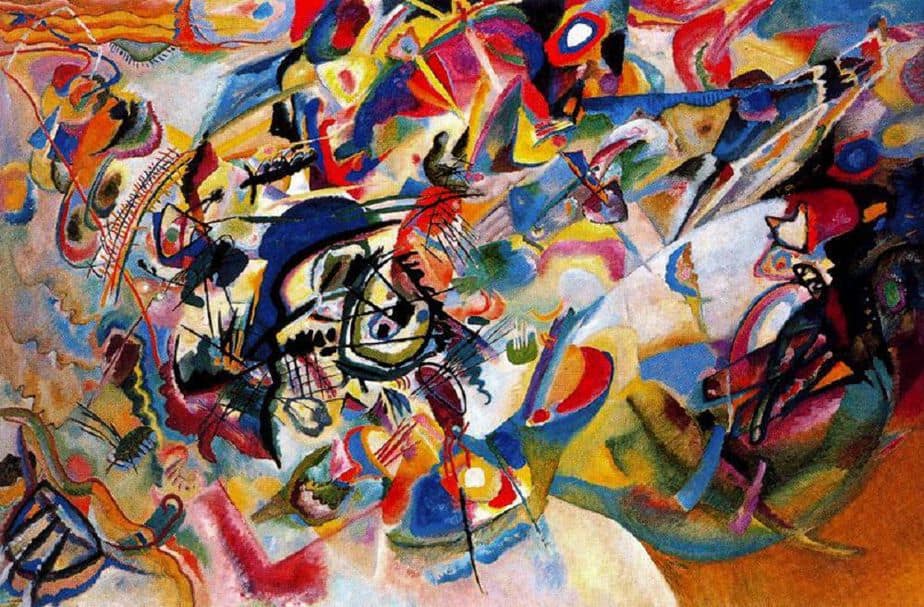 Oil on canvas painting developed in 1913, Untitled marked the point just before the breakout of World War I across Europe.

As a result of this, it is often considered to be touching upon the heavy themes of doom and destruction as well as the resurrection of the world, making use of haphazard arrays of color and shapes to represent these ideas.

Although the theme remains unknown and unexplained, several notable historians suggest the themes alight upon biblical notions of The Garden of Eden, The Flood, Resurrection, and Judgement Day. 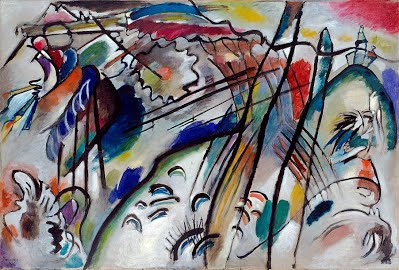 Another oil on canvas painting, this time developed in 1912, this abstract artwork depicts the eternal struggle between good and evil, a theme dominating most of his works post 1910.

On one side of the canvas, the evil in the world is represented, these being cataclysmic events and destruction, particularly espoused by depictions of boats, waves, beasts, and weapons.

On the other side of the painting, the good in the world is represented, highlighting spiritual salvation. A human couple, the shining sun and candles suggest that there is always hope in a world tainted by evil. 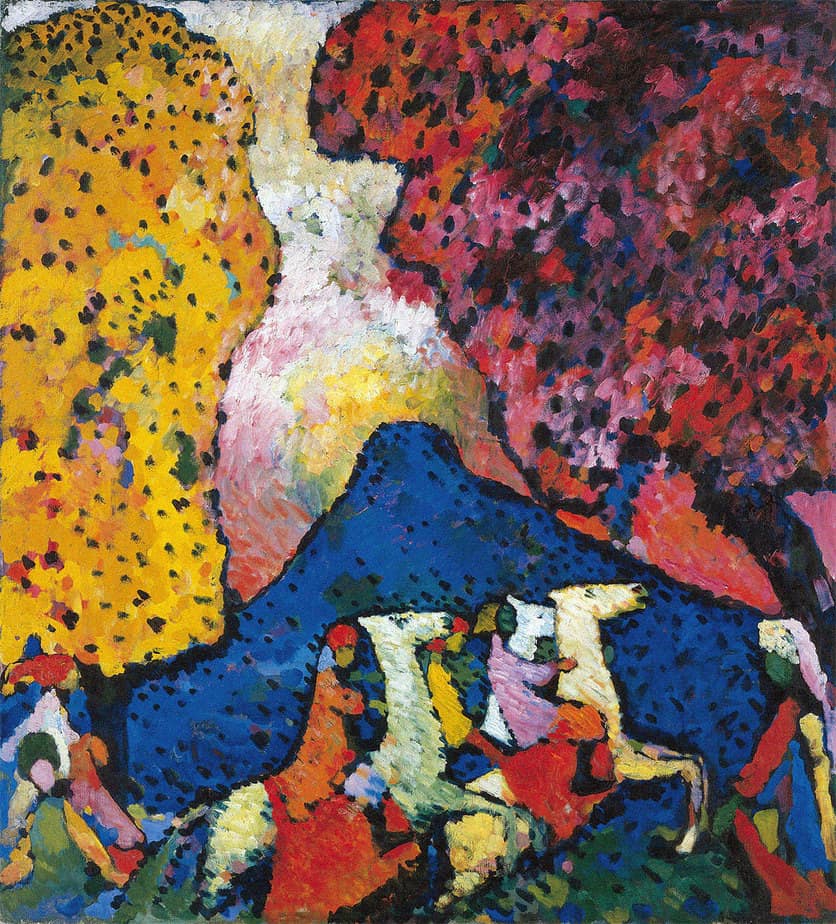 Painted in 1908, The Blue Mountain depicts horses and their riders, a theme he seemingly was captivated by during this period of his career.

Kandinsky was able to easily associate colors with feelings, where the blue of the mountains suggests a coolness and calmness, whereas the reds and yellows suggest warmth and aggressiveness.

It is expected that the three equestrians here are a reference to three of the four horsemen of the apocalypse, set to bring both destruction and revival to the earth. 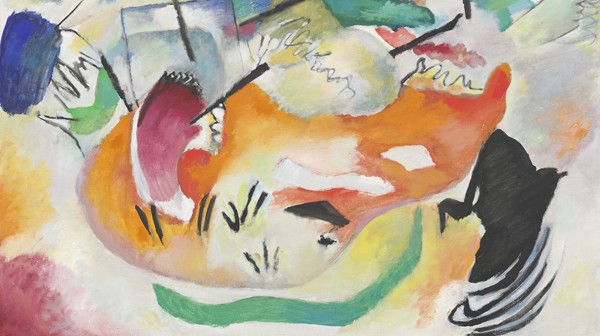 Improvisation 31 is an abstract construction completed in 1913 depicting a sea battle.

Shown in the painting is an intense battle between two tall ships amidst tempestuous waters, and although this artwork was developed close to the beginning of World War I, Kandinsky denies any relationship of his work to the event.

Instead, it is most often linked to the ongoing themes of spirituality and cosmic relationships within his work, in this case where a catastrophic spiritual conflict has prevailed within the cosmic universe. 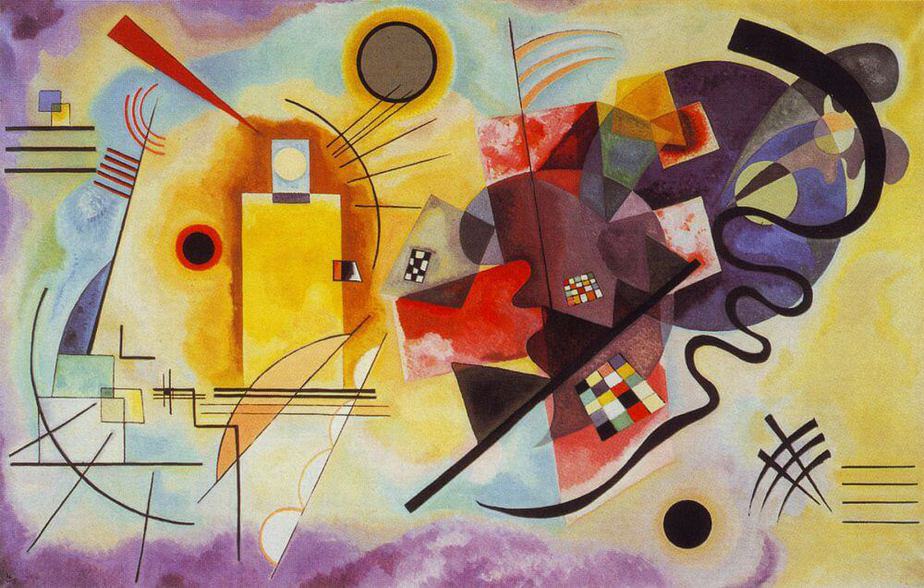 Produced by an amalgamation of different colors, Yellow-Red-Blue is an abstract painting developed by Kandinsky in 1925.

Kandinsky’s masterful use of color here quite clearly displays his unique artistic vision with synesthesia, with each shade of color playing on the viewer’s emotions. 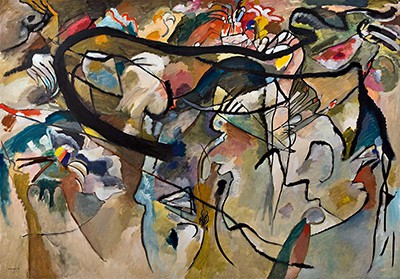 As with many of Kandinsky’s paintings, this abstract expression yet again visits the themes of doom, destruction, death, and revival in his Composition V, a work completed in 1911.

The biblical theme of the Last Judgement is believed to be shown here also, with trumpeting angels painted at the top of the canvas. Depicted clearly are black lines flowing right to left from their trumpets, representing the sounding call of judgment over the world. 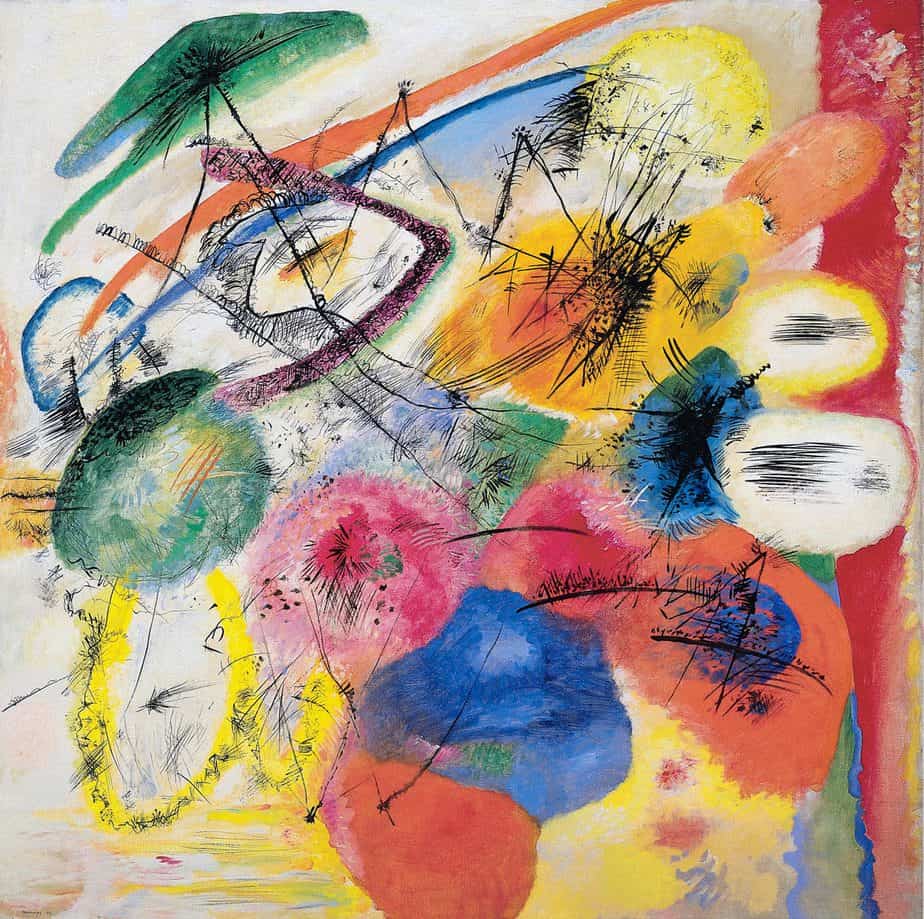 Black Lines was a work painted in 1913 by Kandinsky and is considered to be one of his first non-objective geometric style paintings.

Three black lines are painted across the upper part of the canvas and are thought to represent mountains, with geometric oval shapes distributed throughout the remainder of the painting.

As with most of his works, Kandinsky likely means to convey a sense of spirituality and emotion through his employment of various colors. 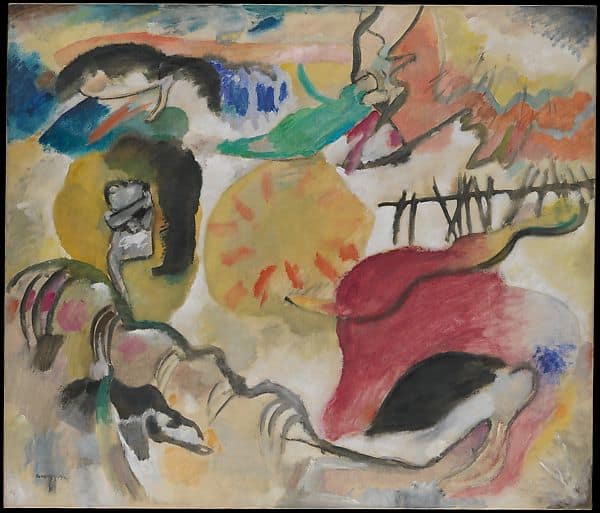 Improvisation 27, known also as Garden of Love II, is an abstract painting developed by Kandinsky in 1912.

The purpose of the painting is expected to evoke an image of the Garden of Eden, where two human figures are seen to be standing together and embracing, all the while surrounding by figures of serpents. 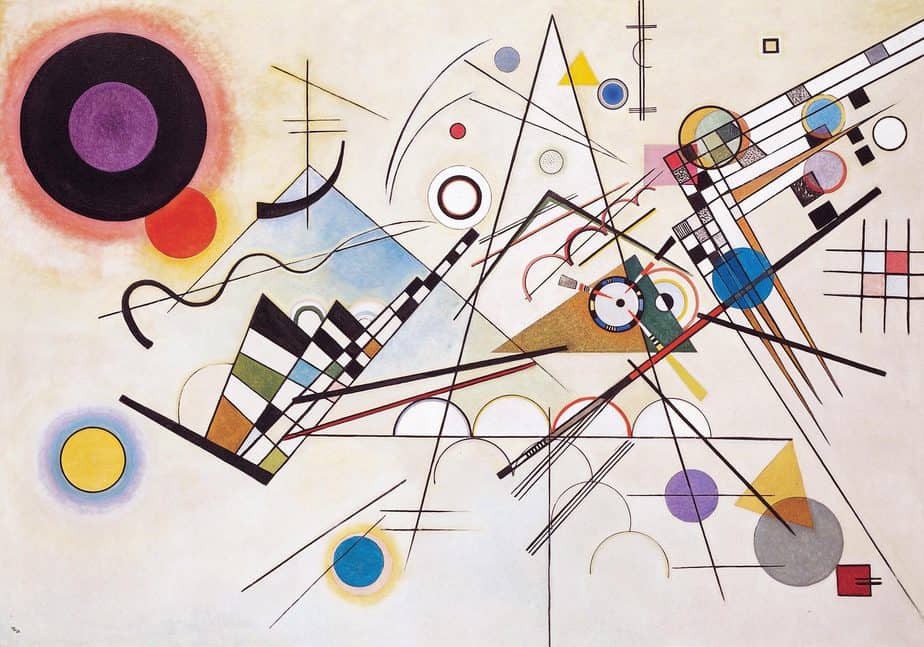 The meaning of Composition 8 (VII), as with many of Kandinsky’s abstract paintings, is unknown. Painted in 1923 as an oil on canvas piece, the painting contains a variety of geometric shapes and forms of the Suprematism movement Kandinsky is well known for.

All the same, due to the variety of shapes and colors, the painting certainly evokes many contrasting emotions from the calm and quiet of the darker color palette to the dynamic and aggressive of the lighter. 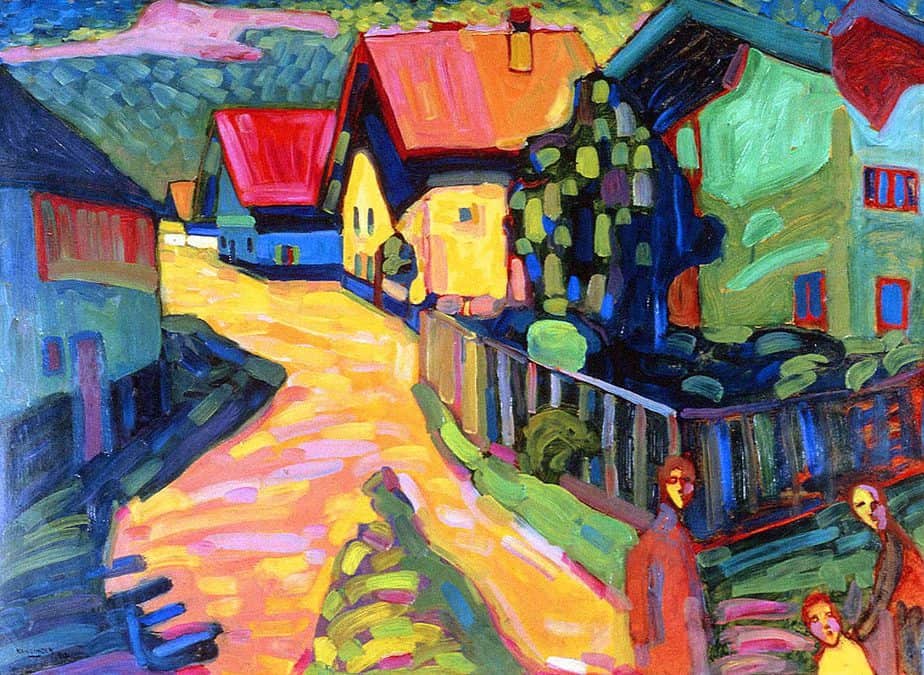 Murnau, aptly named after a village of the same name in Bavaria in Germany, Kandinsky completed this abstraction painting in 1908.

During this period of his life and his career, he had settled down in Murnau for a short time, where he most likely put brush to cardboard to create this masterpiece.

The variety in the color palette provides a certain richness to the work and enhances the overall appeal of both the piece of art and of the village itself.

15.Picture with an Archer 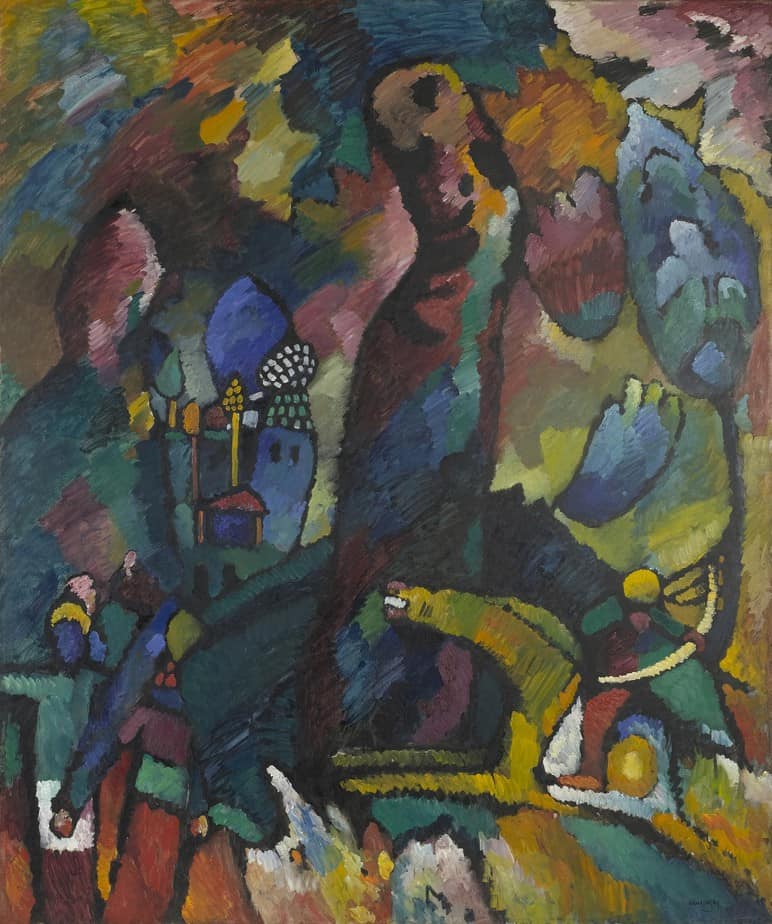 Completed in 1909, Picture with an Archer is an abstraction piece presenting a singular horse rider carrying his ancient weapon of choice, a bow.

The vibrancy of the colors and the presentation of such a traditional landscape can barely be comprehended by the viewer and takes our minds away to a world very unlike our own.

Kandinsky made his mark upon the world of art with many noteworthy additions, with many more works outside of these 15 Famous Paintings by Wassily Kandinsky.

Many other works were completed during his career, including the likes of The Last Judgement, The Cow, Swinging, and many others. Not only so, but Kandinsky’s work contributed to an art movement known as the Blue Rider.

Kandinsky was an artistic genius and his contributions to abstract art forms and geometric Suprematism will not be forgotten by the practitioners of our day, who continue to draw upon inspiration from the artists of old in their works.

Tags:
abstract
Newer What is Pointillism?
Back to list
Older 7 Most Famous Willem de Kooning Artworks