Willem de Kooning was a famous American painter and sculptor who was born April 24, 1904, in the city of Rotterdam, The Netherlands.

Certainly, one of the most important and idealistic Abstract expressionist painters in art history, de Kooning is well known for developing his artwork through a fusion of styles, most notably figuration and abstraction together.

Throughout his decades-long artistic career, he created many famous and noteworthy paintings and developed numerous sculptures.

The following summary of the 7 most famous Willem de Kooning artworks should help you, too, to see just how important de Kooning is to the abstract expressionism we have today. 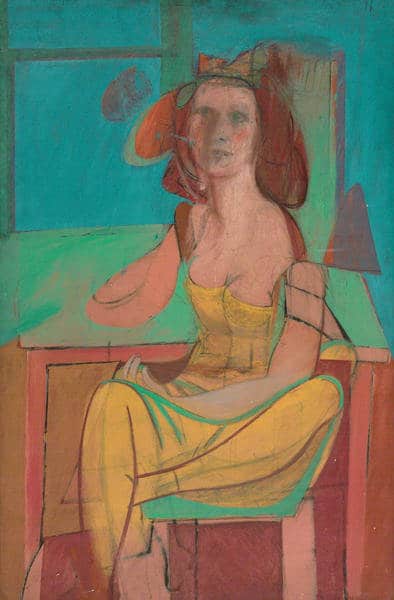 A painting featuring a woman wearing a low-cut dress and posing in a chair, one leg crossed over the other, one arm resting on her lap, and the other bent towards her face.

Painting body parts often proved to be a difficulty for the painter, who would often reduce them to more simplistic shapes requiring fewer brushstrokes. Several artistic forms are obvious in the piece, and the influences of many different artists permeate the work from the likes of Picasso to Gorky.

The background of blues, greens, and oranges shows an obvious par-down by the artist. Following a series of figural paintings of men, the Seated Woman is the first major painting by de Kooning of a woman and a subject which he would feature in more artwork throughout his decades-long career. 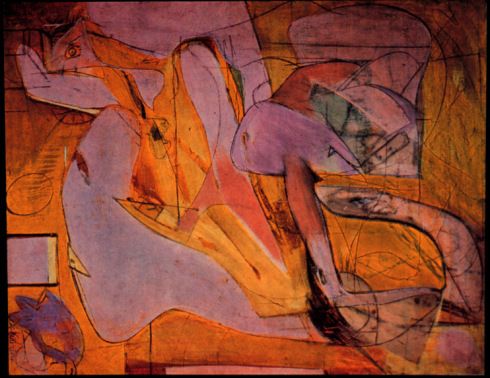 A painting that marks an important phase in the shift of de Kooning’s artwork from figural to abstract in the ’40s, Pink Angels hosts pink and coral-colored shapes mixing with yellows and golds.

The pink and coral shapes depict eyes and forms shown being torn into pieces and colliding with one another. As well as a connection to several other prominent artists such as Picasso, Miró, Matisse, and Pieter Bruegel the Elder, it is likely that the end of World War II and the horrors of the war were fresh on his mind in this composition.

The most important aspect of the creation of Pink Angels is the charcoal lines that clearly indicate de Kooning’s intentions. While many abstraction artists vehemently denied using sketches to plan out their work, de Kooning’s method allowed him to complete his artwork more efficiently. 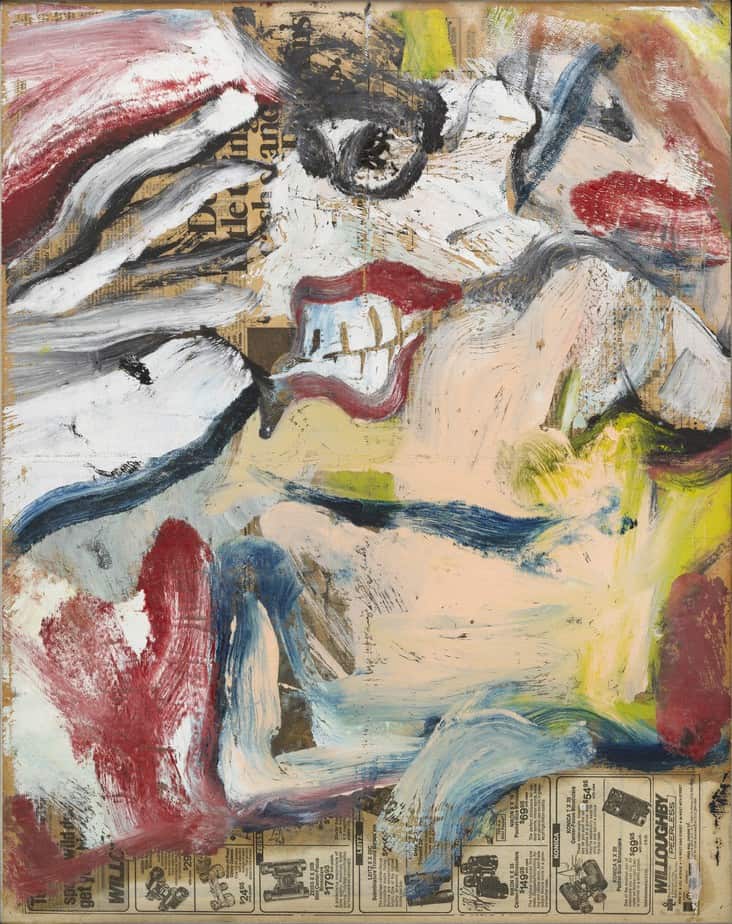 In 1948, when de Kooning was 45 years old he had his first solo exhibition show where most of his paintings resembled this artwork titled “Untitled”.

A composition painted with black and white, the painting featured shapes and allowed de Kooning to play with surface and depth to create a very dynamic piece of art.

While some might observe some vague phallic symbols, there is something calligraphic about the white lines on the surface. Certainly, there was much interest in symbols and icons by abstract artists in paintings and how they might reflect human emotions or experiences.

A friend of de Kooning’s agreed with reference to these paintings, suggesting that there was much symbolist abstraction to be found and well as connotations surrounding organic shapes, numbers, letters of the alphabet, and memories. 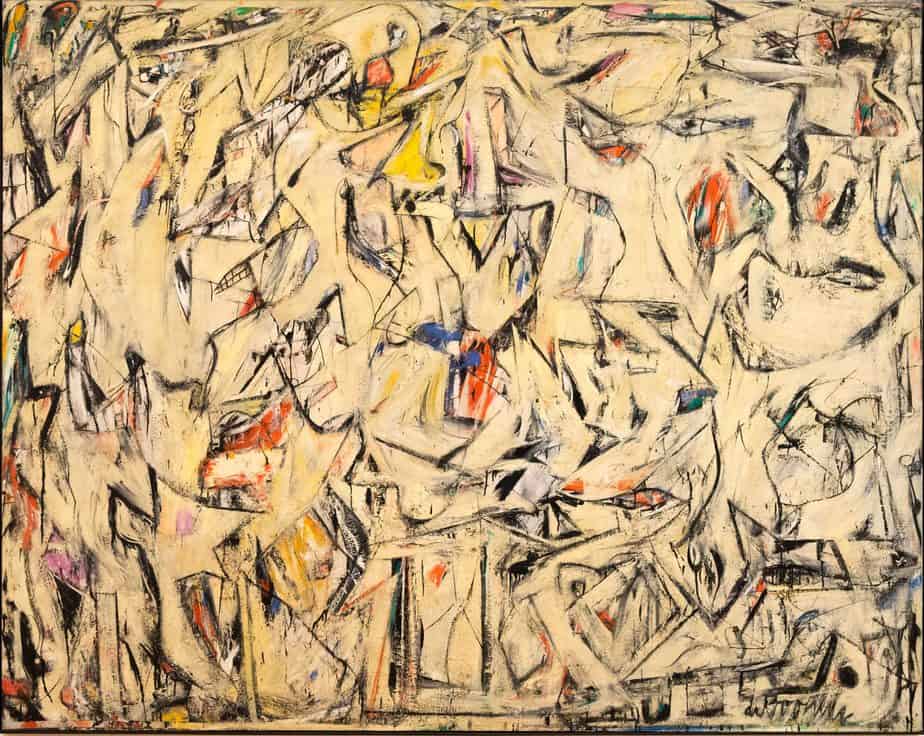 Even after making a return to figuration art in the late ’40s, de Kooning began another abstract expression during the same period. While not as large as some other abstract paintings to come later, sitting at just 6.5 feet tall and 8 feet wide, Extraction boasts the largest canvas size of all of de Kooning’s work.

This painting embodied the entire space de Kooning encompassed in the physical world, at the fullest extension of his arms and fingers.

The painting itself is dominated by white, cream, and yellow shapes with black and grey lines, as well as strokes of crimson, gold, magenta, blue, and aqua throughout the canvas.

As a result, not one point on the painting stands out and works to draw the viewer’s eye across the entirety of the piece. 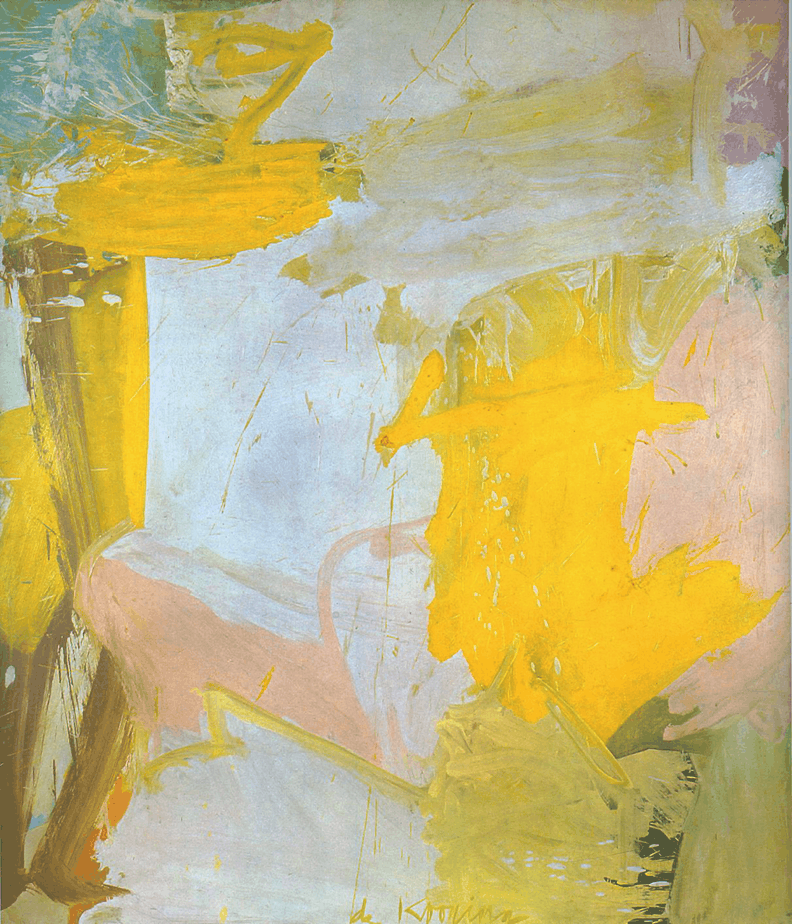 Towards the end of the ’50s, de Kooning began to spend his days in East Hampton, known for being quieter than the busy and bustling streets of New York City.

Rosy Fingered Dawn at Louise Point reflects well the stylistic choices and brushstrokes that dominated de Kooning’s work but departing from the color palette choices of his past.

This new palette choice of pinks, yellows, and blues possibly reflect a trip to Italy and the bright nature of such colors suggests beautiful landscapes and reflections of water.

While some parts are thick and impastoed, other parts are dry and thin, a technique purposefully employed with newspaper to absorb excess oil. In the end, this causes the surface of Rosy Fingered Dawn at Louise Point to be quite variable, containing lushness throughout. 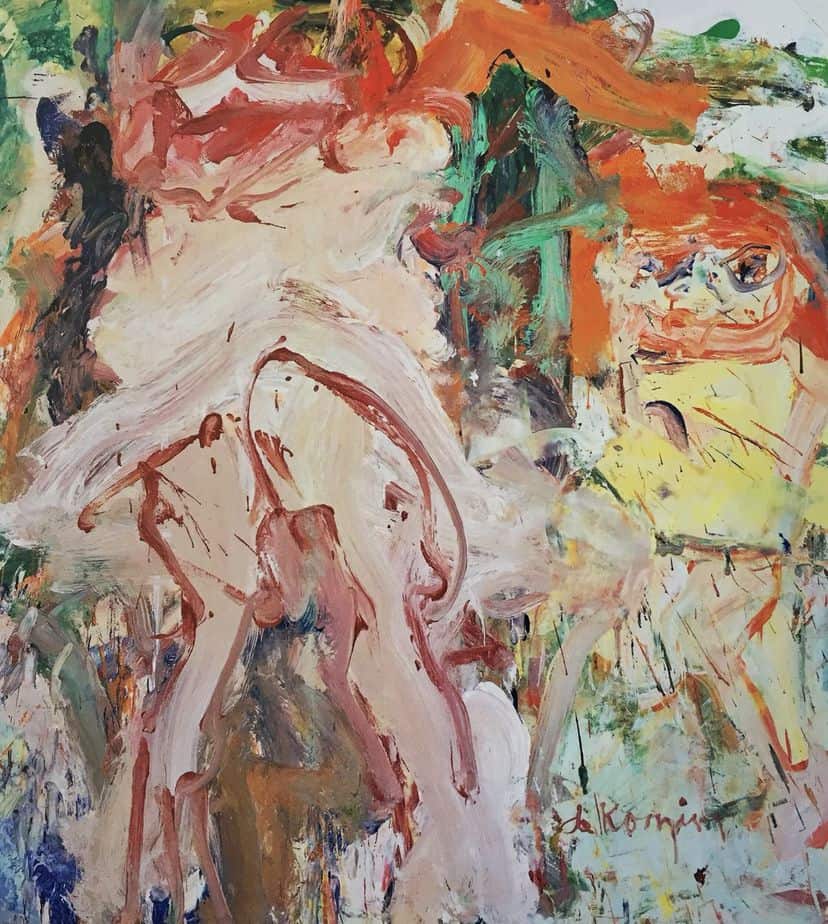 Following his move to East Hampton, de Kooning took up figural artwork again, this time turning his work towards the people who lived near him and enjoyed the beaches and forms a part of the most famous Willem de Kooning artworks.

In Woman and Child, the skin of a woman with knees drawn up is evident, with an orange-haired child relaxing next to her. As with the paintings of women in the 1940’s, de Kooning develops the perspective and the figures to be ambiguous, creating disconnected shapes in the place of body parts.

Being produced in the 1960s, many suggested this painting was out-of-step with the Color Field, Minimalism, and Pop Art expressions popular at the time and others suggested that a man of de Kooning’s age shouldn’t engage in such works.

All the same, de Kooning was a popular name in the ’60s, and his artwork a desirable commodity for collectors and museums alike. 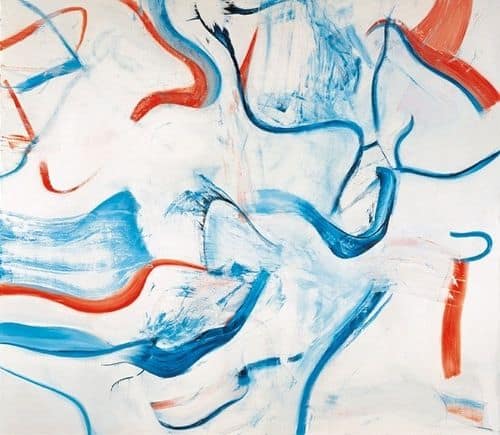 Struggling with depression, drinking problems, and the familiarity of his artistic style by the end of the 1970s, de Kooning sought a new style of painting.

Even then, in seeking new ways to do his craft, he inevitably returned to the old ways. Untitled VI, painted in 1983 boasts a surface thickly painted in some parts and pared down in others, and obvious use of layers, shapes, and juxtaposition.

The ribbons of red and blue appear to blow across the surface of the canvas, evoking shapes and doodles and the white space a play on the figure and ground that de Kooning’s work was so well-known for.

Certainly, in relation to his earlier work, these late paintings of the 1980s show an elegant summary of the artist’s entire career,

These 7 most famous Willem de Kooking artworks are certainly not the only ones created, and of de Kooning’s additions into abstract expressionism, there are many more not listed here.

As a result of his work, de Kooning is one the most well-known abstract expressionist artists of the 20th century.

It is without a doubt that the popularity of de Kooning, arising from his use of vibrant colors, fluid brushstrokes, and masterful techniques will continue in the art world, as artists continue to seek inspiration from the influence on artistic expression from those who came before. Also, Check out the 10 Greatest Modern Art Paintings.

Tags:
abstract, impressionism
Newer 15 Famous Paintings by Wassily Kandinsky
Back to list
Older 50 Most Fascinating Public Art Around the World