The Aegean Art period encompasses works from the Grecian area (ancient Greece), most notably the Mycenaeans (Early Greeks or the first one who spoke Greek), the art of the Cyclades (an island in the Aegean Sea), and Minoan (Bronze Age Aegean civilization on the island of Crete and other Aegean Islands) art.

Aegean art encompasses these local arts that were located in or around the Aegean Sea.

The importance of art and its types of art included in this category are architecture, painted murals, sculptures, and other art forms. Some critics claim that putting arts from very different civilizations together in this way merely because they were located near each other and were created around the same way is forced.

Because of this, it is hard to make blanket statements about this art movement’s effects on society.

It can be said, however, that all of these have influenced later art movements, including those in our own day.

Art of the Cyclades 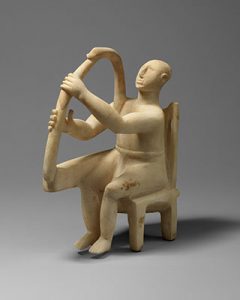 Cycladic Art, from the Mediterranean islands known as the Cyclades, is shown in the archeological record to have begun around 2600 BC.

Since archaeology and tourism began in the late 1880s on what were previously lonely farming communities, much of what is left of the art and culture have disappeared or been destroyed. Art was known for its therapy functions.

From Cycladic artists, we have the first known Greek sculpture, characterized by nearly featureless faces on simplistic oval heads, and often Venus type figurines. The simplicity of Cycladic cultures is often compared to modern sculptors such as Henry Moore. Many of the sculptures feature only a nose, or sometimes the outlines of eyes.

Sculpture is an art of the open air. Daylight, sunlight, is necessary to it, and for me, its best setting and complement is nature.”  – Henry Moore

A Cycladic sculpture was featured at the opening of the Olympics in Athens in 2004, and the art period enjoyed a resurgence in popularity.

Art of the Minoans

The Minoan culture was named so by the British archaeologist that discovered it while excavating in Knossos on the island of Crete. Crete was the home of the legendary King Minos and of the Minotaur. 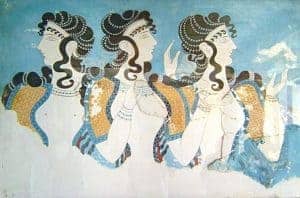 Art of the Minoans queen fresco

The Minoans were lovers of nature, beauty, sport, and luxury and all of these things are represented in their brightly painted frescoes, intricate gold jewelry, ivory carvings, sculptures influenced by nature, and beautifully rendered images on pottery.

The architecture of the Minoan culture was decorative and very advanced, including indoor plumbing.

Like the Egyptians, the Minoans celebrated their culture by painting frescoes and murals on their walls depicting courtly processions, acrobatics, and images of daily life. Additionally, they also painted scenes and patterns of aquatic life.

Anthropologists believe women were among the skilled boxers of the ancient, sport-loving Minoan culture that flourished on Crete until 1100 B.C. The boxing booths at English fairs featured women in the 19th and early 20th centuries.”  – Katherine Dunn

Art of the Mycenaean

Mycenae, the stomping ground of Electra, Oedipus, Agamemnon, and Clytemnestra, is a Peloponnesian island whose culture was rediscovered in 1841 when Greek archaeologist, Kyriakos Pittakis , uncovered the Lions Gate, the entrance to the city that was mentioned so frequently in Greek myth and history. 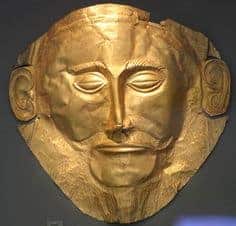 Art of the Mycenaean – Agamemnon mask

There they found golden masks; one possibly being of a real-life Agamemnon.

The civilization lasted from around 1650-1200 BC and was nearly as dramatic in real life as it was in literature. The Mycenaeans were a warring culture that dabbled in piracy and looting. This comes forth in their artwork.

Some of what was found were decorated weaponry, fortified architecture, and while some of their imagery represented nature, much of it was structured. Many of the images of nature were of beings being hunted.