Africa is a large continent full of a myriad of countries and cultures, its art cannot be defined under just one heading. “African Art” as a term, therefore, usually refers mainly to the art of Sub-Saharan Africa. The artistic trends and periods of the Mediterranean coast of Africa, or the art of the Islamic and Christian nations of Africa, have their own names, traditions, and art movements.

African Art has many characteristics, some of which include creative expressionism over realism, the prevalence of images and sculpture of the human figure, larger focus on sculpture rather than painting, abstract themes and representations, melding visual and performance arts (such as in the case of masks), and non-linear scaling.

Ancient African art dates back at least 6000 years to rock art found in the Sahara. The whole of Africa was influenced by art depicting nature, both real and abstract, created by its many cultures from the Egyptians in the North and craft makers in the South over the millennia. 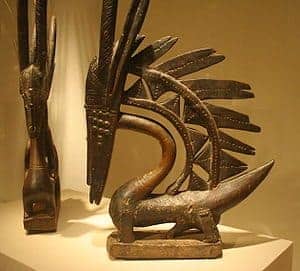 Kush (modern-day Sudan), a Nubian kingdom mentioned in Abrahamic derived religious texts, created relief sculpture to decorate palaces, and also pyramids and monuments, much like their enemies, the Egyptians.

Around the 10th century AD, art became more sophisticated through the work of the Igbo Ukwu and Ile Ife. The Igbo Ukwu produced bronze and terracotta works, while the Ile Ife worked in bronze, brass, ivory, and precious stones. These artworks were status pieces for the influential and were sometimes associated with royalty.

What is called Traditional African Art is what is most commonly recognized by Westerners. Wooden masks feature heavily in Traditional artworks, and originate mostly from Western African countries. These masks are created to represent human, animal, or mythical creatures and are used for ceremonial purposes. West African Traditional Art is often very colorful and uses plant fibers, stones, gems, ivory, animal hair, and pigments in decorating the wooden pieces, including both masks and statues. 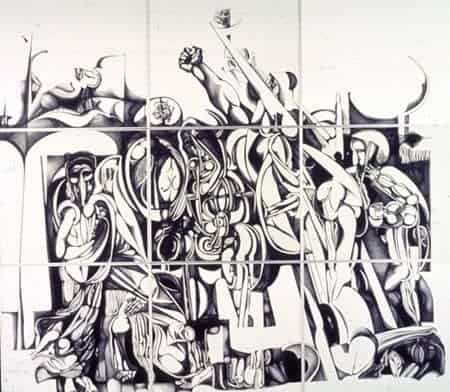 Westerners believed that African art was substandard due to lack of education and poverty until the Avant-garde artists of the late 19th and 20th centuries took a major interest in it. These artists saw in the art a focus on the imagination rather than a drive for realistic interpretation. The expression of feeling and emotion that emanated from these works, the colors used and the abstract execution influenced the Impressionists, Cubists, Abstract Expressionists and other art schools of the modern era.

“African art is functional, it serves a purpose. It’s not dormant. It’s not a means to collect the largest cheering section. It should be healing, a source a joy. Spreading positive vibrations.” – Mos Def