The location area of the Ancient Near East is mapped differently by different governmental and academic organizations but is generally agreed to be the northeastern countries of Africa, the Eastern Mediterranean countries, the Arabian Peninsula, and Mesopotamia. Some have it reaching into as far as what we know of as the Middle East.

Art began to blossom in these areas, in Mesopotamia specifically, in the 3rd millennium BC and goes back even further past the 8th millennium BC to the Neolithic era.

Mesopotamia spawned the world’s first cities and its some of its first art. Much of the inspiration for Ancient Near Eastern Art came from the relationship between the natural world and the world of the gods, except in Egypt where the Pharaoh sometimes replaced the divine in art.

Beginning in the ancient civilization of Sumer, the land from which we have one of the first formal examples of written script, as well as the first literature, the art of ceramics, sculpture, and metallurgy, gained sophistication not before seen.

For the first time, humanity was organizing itself into urban civilizations known as the Urban Revolution. In what is now modern-day Iraq, cities like Ur and Babylon became cosmopolitan meccas with definitive social hierarchy and status. 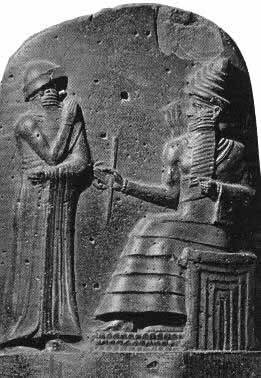 The Stele of Hammurabi Ancient Near Eastern Art

While wealth was built from agriculture, status was dependent on the governmental rule or from relationship to religious status. These themes come into play within the images they created.

“If he does not plant the field that was given over to him as a garden, if it bearable land, the gardener shall pay the owner the produce of the field for the years that he let it lie fallow, according to the product of neighboring fields, put the field in arable condition and return it to its owner. – Hammurabi

Steles are a great example of the exaltation of royalty and divinity.

Pyramids, temples, and ziggurats are also examples of the reverence for greatness. The Stele of Hammurabi is seven feet tall and commemorates King Hammurabi, the first formal lawmaker from whom we get many of our own laws today.

At the top, the stele depicts Hammurabi receiving his royal insignia from the god of justice, Shamash. The lower part of the stele is written laws. Steles like this were placed publicly so that citizens would have any time access to important public information such as the law. This sophisticated art form was important for both aesthetic and educationally progressive reasons.

Reliefs on palace walls and public buildings told the stories of the peoples of the land, in particular, the glories of victorious battle. These reliefs are done in stylized detail and with attention to good composition. These reliefs were done in a narrative style that told the story of battle, whether it be against rival armies or hunted animals.

Rulers in the area showed their influence and power through the architecture they built and would leave behind. Some of this architecture was built as a gesture of worship to a particular god or goddess, such as in the case of the original temple in Israel. Nebuchadnezzar II, of biblical fame, built a gate in honor of Ishtar.

With bricks of blue, gold, and black glazed paint and a gate covered in lapis lazuli, the gate would have shined like a jewel from quite far away. On approaching the gate, viewers would have seen bulls, dragons, and flowers decorating the surrounding wall in honor of the goddess.

“We have always realized, as Israelis and as Jews, that we are not fighting Islam and thus avoided turning the Temple Mount issue into a war of Jews against Muslims. – Reuven Rivlin 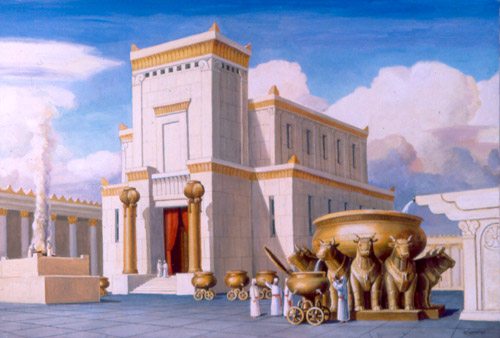 The metallurgy of the period was detailed and crafted in ways that have not been improved upon to this day. Drinking vessels and vases were formed into near-perfect representations of animals and finished with relief etchings of natural scenes. Ceramics were both beautiful in form and highly proficient function and were even whimsical in design.