The Archaic period in Greek art saw a flourishing of sculpture and decorated pottery; particularly vases in the red, and black styles. Near Eastern and Egyptian influences played prominently in the change in style from the previous geometric standards to a more naturalistic style that included animals, mythical beasts, and botanical elements.

The artistic traditions of the Archaic Greek Art movement set down during this period influenced the later Classical period in Greek Art. Naturalistic sculptures of the human figure were created in large scale, jewelry took on new refinement, and painting evolved with the introduction of new mediums. 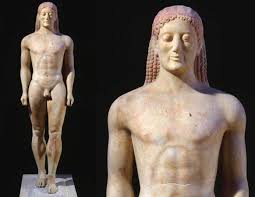 Beginning in the 7th century BC, a divergence took place from which artisans took a turn away from the geometric designs of the past and began to focus more fully on figures and elements of the natural world.

Greece was expanding through colonization into other parts of the world, and from this, they were influenced by other cultures and societies, most notably the peoples of Crete, the Nile Delta, Cyprus, and the Near East. From these cultures, they learned how to craft in carving and sculpture of ivory, gems, and metal and to cut in those mediums as well.

Images evolved into more mystical and fantastical subjects such as combined beasts like the Sphinx or Satyr-like creatures. These new ideas in art were assimilated into producing images from their own religion and culture.

If you see a wonderful archaic Greek marble object in a museum, it’s not only that it’s beautiful, but what comes to your mind is the fact that it’s 2,600 or so years old, and it was done by a human being at that time who you have such a limited ability to grasp – and yet you have this enormous ability to grasp.”  – Michael Steinhardt

The art world of Archaic Greece flourished in its centers of Corinth, Athens, and Sparta, each with its own unique style and mediums. The artists of Athens worked with pottery and vases, creating beautiful mythical images on them. The Corinthians focused on silhouettes in a tapestry like form of small creatures and botanical elements, while the Spartans delved into forging voluptuous bronze vessels and ivory carvings.

In the realm of Grecian sculptors, a trend was established in the making of Kouros and Kore, male and female standing sculptures. Kouros, the male form, was nude and was possibly influenced by Egyptian statues. Kore, the female, was also known as the “draped maiden”. The statues were very large in scale and often decorated the entrances to sacred sites such as burial grounds. Other erections at sacred sites were the stelai of the aristocratic families of Athens which they had carved in relief and displayed at the graves of their loved ones. 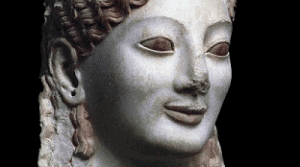 Two of the world’s most important architectural elements of all time were created by the Greeks during this period – the Ionic and Doric columns. These columns now decorate some of our most important state and religious buildings down to the homes of many an average neighborhood. These columns are not the only claimants to their names; they are each part of a school of architecture, respectively the Ionic Order and the Doric Order. Ionic columns are those that are topped by a double scroll, and Doric are those that have a simple top and gradually bell out toward the bottom of the column.

The sixth century BC saw the Greeks embellishing on previous norms in Temple art. Paintings, moldings, and reliefs and sculptures of the human figure were added as Grecian tastes and interests evolved. Black figure painting took off in Athens and was established as a popular export to other regions of the known world. These in demand images on pottery took great skill to create as the artist created a narrative in silhouette alone. The figures pictured showed how Greek culture handled funeral rites, daily activities, religious and mythical matters, and other important information about their culture.

Andokides, a potter from around 530 BC, is credited with introducing red figure painting which superseded black figure painting. The red medium allowed for more detail and the opportunity to show more dimension. The same themes were present, but with more focus on Grecian daily life. 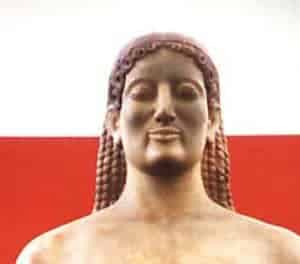