The Bronze Age preceded the Iron Age, and neither is pre-historic.

These ages are denoted by when culture began to commonly use the metal named. Some previous cultures had occasionally made jewelry and other objects from these substances, but it is not considered an age until a full range of objects is frequently in use.

These ages brought more commerce and trade as the civilizations of the periods had greater possessions to barter with. The Bronze Age flourished mostly in Near East and Iron Age art saw a greater world representation into the Mediterranean and as far away as the British Isles. 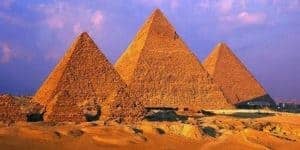 The great pyramids of giza

The Bronze Age began with the advent of smelting which is the melting of a metal so that it can be shaped and manipulated. The economic expansion of trade brought with a greater employment of skilled workers, leading to more elegance and artistic detail in ceramics and religious artifacts and weaponry.

Egyptian art, Mesopotamian, and Sumerian art came into being during the Bronze Age. The pyramids at Giza near Cairo, Egypt were created during this time. Other cultures that evolved artistically in this time period were Persians, Aegeans, Assyrians, Etruscans, Hittites, and Greeks. Art in China was also coming into its own.

“Stone Age. Bronze Age. Iron Age. We define entire epics of humanity by the technology they use.”  – Reed Hastings

The Bronze Age saw the development and mastery of written language, the dawning of the world’s first cities, and a more comprehensive form to both government and religion.

These things coupled with advancing talent and skill in metalworking, stone sculpture, painting, and wood carving led to more sophistication in art and architecture. 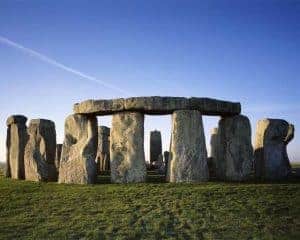 While the manipulation of bronze was not as prevalent in Northern Europe in the Bronze Age, they were not without art altogether.

Stonehenge was built in 2600 BC and other megalithic structures, and also petroglyphs from around that time can be found in various parts of Northern Europe.

The Iron Age rose quickly, once it emerged, the world over, but did leave some prominent civilizations behind. The art and culture of some of the Aegean societies declined while Greece rose in power, influence, and the arts. Celtic lands established themselves as great metalworkers and when Greece later began to lose its power the Romans entered the art scene.

China was the earliest civilization to produce cast the iron and they also invented wrought iron. Chinese artists were creating great and epic art in the Iron Age. One notable achievement was the Terracotta Army of Emperor Qin. 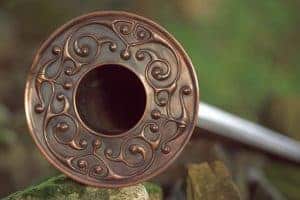 During the years that Greece was struggling under the weight of becoming an empire, its smaller communities did not have the resources to create the great paintings and sculptures they had during the days of luxurious palatial murals and statues.

Once Athens had established itself, artisans returned to the pottery making of their forbears and introduced a reemergence of geometric design. Five periods of art passed within the Iron Age time frame in Greece: Geometric, Orientalist, Archaic, Classical, and Hellenistic.

The arts in the Near East do not show significant change during this period, likely due to changing political structures.

When the Celts entered Britain during the Iron Age, they brought a curvilinear style of metal decoration called La Tene that was being practiced throughout middle Europe. This decorative trend was quickly adapted to the style of Irish and British artists who added their own spin to it. These designs were limited to important objects such as weaponry and were not found on daily use household items.