The Carolingian Renaissance, as it is popularly known, was the defining artistic movement of the Frankish Empire in the years dominated by the rule of Charlemagne. Carolus is the Latin word for “Charles”, and that is how the movement was named. The art was created for the emperor and his heirs by the court for the court. Charlemagne, as The Holy Roman Emperor, had a religious mission, and as such, devoted focus to the arts of certain important monasteries that contributed to the art of the period.

Most Carolingian works were created in Central Europe in what are now several individual countries. British and Byzantine artists had some influence on the Carolingian movement, but those areas were not within the Frankish empire.

Charlemagne’s personal need to be seen as a reviver of the great art of empires past saw the artists under his rule return to the classic styles of the Mediterranean while merging them with those of the North.

It has been argued that Christianity might not be the world religion that it is today if not for Charlemagne. Also known as Charles the Great, he ruled the Franks from 771-814 being crowned Holy Roman Emperor by the Pope in the year 800. Much of Europe was practicing non-Christian faiths, what Charlemagne’s friend and biographer called “devils”, and so the king sought to Christianize the subcontinent by military force if necessary.

Charles also was bent on throwing the image of his lands being seen as barbaric and make it call to mind the greatness of Rome and match his title. Indeed, his palace (for which he had built items and elements native to Rome such as the aqueduct) was called New Rome. This, added to his being anti-iconoclastic, cause friction with the Eastern Church and Byzantium.

The period of his and subsequent reigns of his heirs was noted for the artistic devotion to their faith. This devotion expressed itself in monastic illuminations, carved book covers, sculpture, frescoes and more.

Carolingian illuminations are discernable by the departure from earlier illuminated depictions of people as gaunt and pleading and a return to the more robust figures of antiquity. Some of these illuminations are also more luxurious and rich owing to the king’s patronage and therefore greater wealth of materials.

These manuscripts were covered in ornate ivory carvings reminiscent of the diptychs of earlier centuries. Though few of these remain intact as singular codices with both book and cover as one, they do survive separately. The carvings, which were sometimes made of wood, frequently feature biblical scenes. These covers were known as “treasure bindings”. 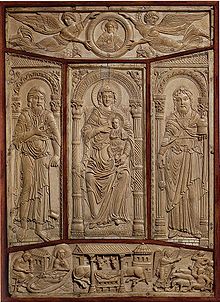 The ivory carvings were most often set within a jeweled or gold framework, often both. The goldsmiths that created these works also worked in other forms such as frames, diptychs, architectural elements, as well as holy vessels and relics.

Sculptors and metal workers pushed the envelope, probably by the commission, and created large scale bronze doors and a crucifix for the palace chapel. The crucifix featured a full-scale sculpture of Jesus in gold. It may be that the legendary crucifix was actually wood gilded with gold, but that does not take away from its ingenuity.

Mosaics added to the lavish atmosphere of the Carolingian religious architecture. With exquisite detail in colors and finishes not unlike those of the illuminated manuscript, these glowing, golden images would have likely inspired many a new convert in their heavenly aura. Many mosaics were affixed to domed ceilings in religious buildings and depicted narratives, scenes, or other religious stories or story elements.

Very few frescoes from the period remain. Both existing and lost frescoes included the religious narrative and imagery, and also detailed the battles of Charlemagne’s campaigns. 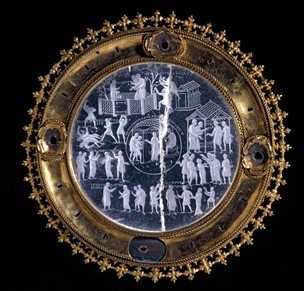 Stucco, and, in some cases stone, sculptures, and reliefs were defining features of the Carolingian churches and palaces. They were often life-size representations of key religious scenes and figures and in many cases the Carolingian rulers themselves.

The Carolingians certainly left their mark on the world in creating the awe and fascination with which Christianity was to conquer a continent. The opulence they left behind would an inspiration in later movements of both art and religion.