Celtic art is not characterized only by the stylized throwbacks you see at modern-day festivals or in shops that sell nouveau Irish merchandise. In fact, the Celts did not arise in Ireland, but in Central Europe.

Celtic art is a broad movement in the history of art that is really three movements attributed to peoples of different times, locations, and cultural values, but that share a heritage.

The overarching theme of Celtic art is one of symbolism coupled with non-linear, geometric design. Most surviving pieces are those that were forged from metal or carved in stone, so scholars cannot be sure that all typical art from the period is represented in what still remains today. 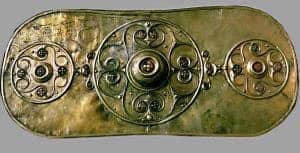 Pinning down the exact dates of the origins of Celtic art is debatable as archaeologists put the beginnings of Celtic culture at 1000 BC while art historians generally begin with the art of the La Tene period in the 5th century BC.

Looking at the archeologist’s model, the arts and crafts of the Celts begin with the Hallstatt Culture which was centered in Austria but spread over a larger region. The Hallstatt’s were prolific traders in mined minerals and were a wealthy civilization. With bronze and iron age metal art working technology, they created weaponry and tools in iron and decorative pieces in bronze.

Being a mobile society, they had been influenced by Mycenaean art as well as other Mediterranean styles. Some silver and gold pieces existed, but not many.

“The Green Man has also become synonymous with Cernunnos, the Celtic horned God, often portrayed in Celtic art as part man, part stag, who roams the greenwood wild and free. He is a character of strength and power, but often sadly mistaken for the devil by the Christian fraternity due to his horned appearance.” – Carole Carlton

Motifs of the Hallstatt era were animals, spirals, and geometric designs on weaponry and adornments. They favored birds, knotwork, and fretwork. They employed color, and in unpainted pottery, they used a polychrome technique. Weaponry and other tools were shaped according to both aesthetics and usefulness, as in the case of dual-sided curved axes, or curved swords. 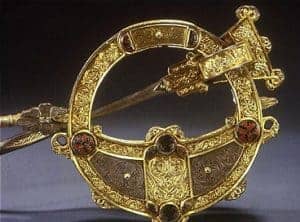 The La Tene era is the beginning point as far as art historians are concerned and is chiefly recognizable by its swirling curvilinear patterns. The movement began in what is now Switzerland, and its influence is still felt today. The Celts had by this time moved northward into Switzerland from the Danube River in Austria and the Rhine region of France.

La Tene artists worked quite a bit in gold, especially in jewelry and other personal adornment. Most surviving art from this period in Celtic art is made from gold, iron, bronze, and other metals. Decorated with scrollwork that is reminiscent of foliage and ivies, these metallic objects include vessels, bowls, weapons, and sculpture in addition to the jewelry mentioned.

“And what can a simple girl do? (Henry)I was told, by my father, of St. Mary of Aragon who single-handedly brought down an entire Saracen army with nothing more than her faith in God. He also spoke of an ancient Celtic queen named Boudicca who brought Rome to her knees and burned London to the ground. He oft said that a woman was far more deadly as an enemy than a man, because men lead with their heads and women with their hearts. You can argue and win against another’s head, but never against her heart. (Callie)”. – Kinley MacGregor

The Celts had influenced the Irish and British in the beginning of this era and moved into these lands during this period. Irish La Tene art flourished after Rome absorbed the Celtic tribes of other lands. The Irish were left alone and the artistic style survived there without much Roman influence. It is in Ireland that most Celtic stonework was created, as in the tradition of the Celtic High Crosses.

Insular Celtic art was that of the British Isles, particularly Ireland. It is from these works that we derive much of what the general public would recognize as Celtic art. Monastic traditions in Ireland brought a Christian bent to the Celtic arts and vice versa. The movement produced works like the famous Book of Kells and other illuminations, the previously mentioned High Crosses, and metalwork in the form of chalices and other objects.