Before the 11th Century AD

The artist’s movements of China and Korea are divided and organized by the kingdoms and dynasties during which the art was created. These movements were also influenced by the religious, cultural, and political values of their day.

It would be difficult to summarize all of the various divisions of the art of these two countries and all of their various periods into one generalization. 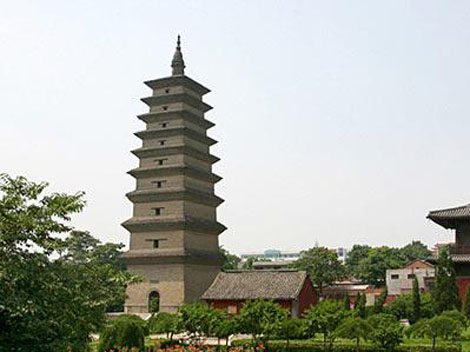 China is home to one of the most ancient civilized cultures in the world and produced some of its most beautiful early artwork. In fact, the art of this culture is one of the oldest continuous artistic traditions.

In the early periods, art was meant to show the wealth and power of the rulers and was done in factories or by imperial staff.

“Traditional Chinese art looked at the Earth from a Confucian mountain top; Japanese art looked closely around screens; Italian Renaissance art surveyed conquered nature through the window or door-frame of a palace. For the Cro-Magnons, space is a metaphysical arena of continually intermittent appearances and disappearances.” – John Berger

While textiles and ceramics were done according to the dictates of the factory or ruler, ink wash painting was left to the aesthetic desires of an individual artist. These watercolor paintings were done on either paper or silk and were then mounted or were hung. They were also often done directly onto other surfaces such as folding screens or lacquer.

The Han and Tang dynasties focused on the human figure in paintings and most examples are those found at burial sites. These paintings, which were done on silk, lacquer, and directly on the tomb walls, were meant to carry the soul to the afterlife or to protect them. Some include the sayings of Confucius or show daily rituals.

The Great Age of Chinese Landscape flourished from the time of the Han Dynasty into that of the Tang Dynasty. Northern artists focused on bold renderings of high mountains and artists in the south used softer lines and brushstrokes to evoke the pastoral scenes of rivers and rolling hills.

Calligraphy was considered by the Chinese to be the highest form of art and painting. Until it was later replaced with fine paper, calligraphy was done on silk. Many pieces were complemented by painted images and were hung on walls with no differentiation from other types of art. 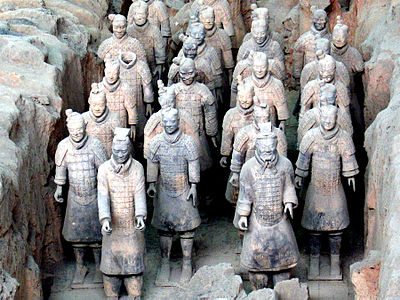 The sculpture was bold and grand with bronze and terracotta figures. Bronze cast figures were decorated with zoomorphic designs. The Terra Cotta Army was not only done in life-size figures but was done on a large scale numbering in the thousands and including horses and chariots. Many sculptures were meant to be buried with the dead or placed at the burial site to protect them. Later dynasties would continue this tradition, but with smaller figures buried with the deceased.

Decorative sculptures, such as those made from precious metals or from jade, were beautifully crafted with great skill and were made for common use or for display. Some items, especially those from jade, were thought to have magical or metaphysical properties.

“The Chinese art world does not exist. In a society that restricts individual freedoms and violates human rights, anything that calls itself creative or independent is a pretense. It is impossible for a totalitarian society to create anything with passion and imagination.” – Ai Weiwei

The Chinese are respected the world over as the authority on porcelain and the skill and talent with which it is done are ancient.

Although influenced by Chinese art, Korea used that influence to create their own unique artistic culture over three distinct kingdoms vying for control of the peninsula. 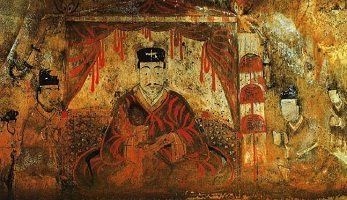 When Buddhism came to Korea in the fourth century, the kings were moved to build and to create art devoted to the Buddha. This was expressed a great deal in tomb and mural paintings that are now known as Goguryeo paintings.

These murals give insight into the life and daily culture of the peoples of this dynasty and the Goguryeo style influenced art throughout Eastern Asia. The murals are also the first hints of later Korean landscape paintings.

Baekje art doesn’t have many surviving examples, especially those in architecture, but scholars can see what might have been in the surviving granite pagodas of a destroyed temple, or in the influence that might be supposed by a temple, Horyu Ji, that was built with the help of Baekje craftsmen.

Many tombs have been raided, but some artifacts do remain, including those at the tomb of King Muryeong. Among the many items found there were swords gold hilts featuring dragons and phoenixes, pins that resembled golden flames, royal golden girdles, and shoes gilded in bronze. 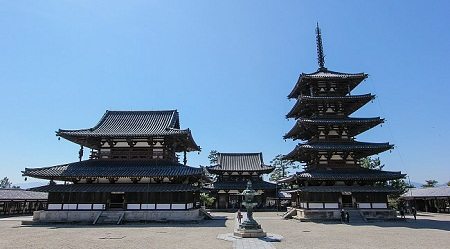 This Korean kingdom is known for the warmth of its Buddhist sculptures, especially in the common “Baekje smile” seen on these figures.

Being the most remote kingdom of Korea, the Silla Kingdom was the last to be influenced by Buddhist culture. However, in an interesting twist, scholars believe there is sufficient evidence to believe that this culture was visited by Mediterranean travelers and may have actually been the terminus of the Silk Road.

Silla artists using techniques very similar to those of the Greeks and Etruscans in their gold jewelry and adornments and they included blue eyes and other European features in artifacts made from glass and beads that have been found in Royal tombs.
The Silla people are most known for their incredible skill in gold-working, and produced