The Classic period of Greek art is what is most often brought to mind when thinking about the artistic achievements of that nation. However, how we see that art today, in its smooth white edifices and sculptures, is not what was seen or intended at the time it was crafted.

Centered in the powerful and cosmopolitan city of Athens, the art of this culture and art movement during this period would influence the importance of art for the rest of time across a myriad of cultures. The sculpture and statuary of Classical Greek Art provide standards not only in our art but in how we view the living human body. 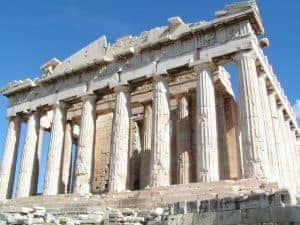 Athens was established as a great and powerful city-state after the war with the Persians ended in a Greek victory in 479 BC. Establishing the Delian League, a confederation of allies in the Grecian lands and islands, and maintaining control over the league and its funds, led to the eventual subjugation of these allies by the Athenians. Having this control over the Grecian peoples made Athens a very wealthy imperial city. It also became the world’s first democracy.

“Let us dedicate ourselves to what the classic art of Greek wrote so many years ago: to tame the savageness of man and make gentle the life of this world.”  – Robert Kenned

Such wealth led to the building of some of the world’s most venerated buildings. The Acropolis, and its most stately building, the Parthenon, were not only beautifully and harmoniously designed, but they also inspired the statesmen, poets, and philosophers of their day to create the building blocks of the societal values we hold dear in our time. Classical Greek architecture was innovative in its time, bringing us the Ionic, Doric, and Corinthian architectural orders.

Classical Greek sculpture left behind the Kouros (male) and Kore (female) figures of Ancient Greece and began to emphasize natural poses, motion, and focused on an appreciation of human anatomy; particularly musculature. We are familiar with the statues and reliefs carved and hewn from limestone and marble, but sculptors also worked in bronze, wood, bone, and ivory. Bronze sculptures followed the same subjects as stone but were considered superior because the value of bronze was higher than that of stone. Bone and ivory carvings were used for smaller personal items. 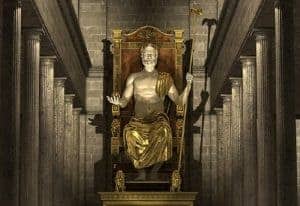 Statues were often painted and this was seen as independent of the sculpting itself. Artists used bold colors to accentuate the hair, clothing, and eyes of the subject but left the skin in its stone form. Metal adornments and jewelry were added as well.

Painters of the era mastered new techniques such as linear perspective, chiaroscuro (shading technique), trompe l’oeil (three dimensional), optical fusion (similar to pointillism, but with lines instead of dots) and graphical perspective. Unfortunately, what Pliny recorded as the highest art, panel paintings, did not survive. However, many frescoes did as they decorated public buildings and places of worship.

Classic art of Greek was about lovers of the beautiful, yet simple in our tastes, and we cultivate the mind without loss of manliness.”  – Thucydides

Pottery, which had been previously quite renowned in both the black figure and red figure styles, went into decline during this period. The only innovation to come out of the period in regards to pottery was the introduction of the White Ground technique which added a painted on clay white background. Following this, no new techniques were brought forth.