Christianity, in its infancy, was a religion followed by the lower classes of society. As such, its art was not prolific as it was likely unfunded, the number of Christians was small, and there may have been an adherence to the strict Old Testament forbiddance of graven images.

When they did produce art, it may have been purchased pagan art that they altered to have Christian symbolism and meaning.

The original art that they created during this art movement period, used the same media as those of the secular and pagan artists of the cultures in which they lived, including frescoes, mosaics, and sculpture in Romantic classical styles, changing the meanings of Roman motifs and pagan symbolism, such as grapevines, peacocks, and shepherds. They also introduced their own symbols such as the fish.

Christianity was legalized in the year 313, therefore, scholars divide Early Christian art into two periods: Pre-Constantian or Ante-Nicene, and the period of the First Seven Ecumenical Councils.

Art historians, therefore, give the period of “early” Christianity a longer timeline than do theologians and religious historians.

“What makes art Christian art? Is it simply Christian artists painting biblical subjects like Jeremiah? Or, by attaching a halo, does that suddenly make something Christian art? Must the artist’s subject be religious to be Christian? I don’t think so. There is a certain sense in which art is its own justification. If art is good art, if it is true art, if it is beautiful art, then it is bearing witness to the Author of the good, the true, and the beautiful.”  ― R.C. Sproul

Many early Christians converted from Hellenistic Judaism, or from the pagan Greek and Roman traditions. These groups were not as restrictive as the Jews of Judea and were from backgrounds and areas in which art and imagery were common. For this and other reasons, the earliest Christian art resembles Classical Greek art.

Christianity at the time was a secretive religion in order to avoid the persecution that was still going on. Their somewhat underground culture was, however, beginning to emerge into a more public face.

The earliest Christians relied on secretive symbolism that was only decipherable by the initiated, but in the change to a greater circle of followers, the imagery began to be recognizable by all. 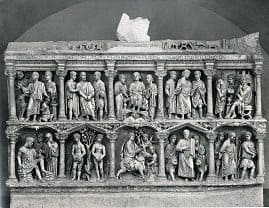 The earliest sculptures stuck to the motifs of classical art, in part to disguise Christian figures as classical ones.

The Good Shepard, for instance, shows the Christ clean-shaven in a short toga. A sarcophagus top showing the Adoration of the Magi represents the angels in togas and a beardless Joseph.

The art of this period is scared and hidden. It is found among the catacombs of Rome, which were burial chambers outside of the city) and in houses where early Christians met for “house-church”. Some graves included martyrium, which was simple structures built over the graves of martyrs, and some Christians were buried in sarcophagi that were decorated with Christian themed reliefs.
Ecumenical Period

“It seems that the appetite for pictures showing bodies in pain is as keen, almost, as the desire for ones that show bodies naked. For many centuries, in Christian art, depictions of hell offered both of these elemental satisfactions.” ― Sontag, Susan

Christianity was made an official state religion in 380, and its emergence into the open and subsequent rise in popularity necessitated buildings for meeting and worship.

As pagan temples were abandoned, they were not suitable for repurposing as churches. Constantine looked to the style of the basilica as an option. Pagan temples had been windowless because most of the worship took place outside, but Christianity saw a rise in the use of windows for both practical purposes and to inspire awe. 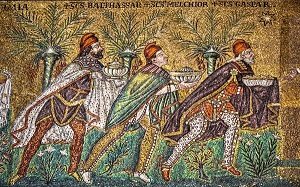 Frescoes and mosaics were popular, but frescoes have not survived well into our time.

Some of the subject matter of these works was borrowed from pagan religions, such as the Virgin and Child motif or the lion, lamb, and bull scenes.

Artists worked with more expensive media as the wealthy converted to Christianity. The gold that would later be popular in Byzantium started to make its first appearances as the background color in mosaics.

More space allowed for artists to complete narratives in both fresco and relief. Some of these were very extensive in scale and detail. The apses of the basilicas used their large space to house figures of Christ or the Virgin Mary, or sometimes iconic frescos or mosaics.

“The consensus seems to be this: we should be deeply Christian artists. But that doesn’t mean we should be something called Christian artists or that whatever we produce should be called Christian art. We should simply focus on our craft, on making the best art we can. We should understand that people will and should resonate with our work not because it is Christian but because it is good. Above all, Christians should make good art, true art; art unafraid of exploring the mystery, portraying evil, and looking for truth wherever it appears.” ― Brett McCracken

There were panel paintings of icons in this period, but they have degraded. Still, they were the predecessors of iconic imagery.

Small sculptures have had the best survival of early Christian works, including ivory carvings and sarcophagi.

Some early illuminated manuscripts and codices have survived, but are rarely complete.

The oldest example is from the Garima Gospels created between 487-88 at Garima Monastery in Ethiopia.