Cubism and Futurism are the predecessors, or foundations of 20th-century abstract art, but are distinctive and defining art movements; each in its own right.

The artists central to the movement sought to turn art on its head by eschewing the notion that art should copy nature. They began experimenting with creating two-dimensional images on canvas for the very reason that the canvas has two dimensions. Later, artists would break into cubist sculpture. Futurists believed that the youth were strong and did not need to rely on the traditions of the past but should forge their own artistic ideals.

These two avant-garde movements radically changed the face of art and brought it into the modern era.

Founded by Pablo Picasso and Georges Braque in Paris around 1907, this movement got its name after Louis Vauxcelles, an art critic, called the elements of an abstract landscape piece by Braque “cubes”.

Braque was influenced by Cezanne and Picasso got his inspiration from African Art he had seen at an ethnographic museum at the Palais du Trocadero in Paris.

These influences and inspiration gelled with the artists’ burgeoning ideas that new definition of art could break free from the constraints of copying nature, being a slave to perspective, and following the techniques of the masters.

Cubism allowed them to focus on geometric, abstract forms that broke down an image into fractured recreations that could be viewed in relief from various and contrasting perspectives. 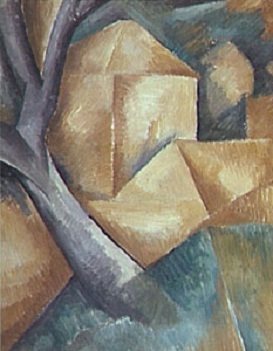 In the beginning, Cubism represented objects in a way in which they could mostly be recognized. In later variations, such as High Analytic Cubism or Hermetic Cubism, they left landscape behind and began to focus on still lifes and human figures that were very abstracted and rendered monochromatically in dark, dull colors.

Picasso’s papers collés period began in 1912 and saw the artist’s ingenuity in the emergence of a new technique that involved adding paper to paintings. Both artists began using this mixed media and stepped completely away from what they called “Illusionism” – the adherence to three-dimensional space. This new technique they called “Synthetic Cubism”, the representation of the object being shown in abstract is alluded to in the shape of the paper cut out or the paper is printed with elements that make the connection.

“Once an object has been incorporated in a picture it accepts a new destiny”. – Georges Braque

Much of modern art takes from this movement, and even though Cubism is thought mostly to be an art on canvas, many sculptors adopted the ideals of this movement and are known as Cubist sculptors

The youth of early 20th Century Italy wanted to leave the past behind and instead look to the technological achievements of man and where they would be going in the future. This was not only an artistic movement, but a philosophical, intellectual, and social movement as well. The Futurists were not the only ones interested in these things or initiating movements around them, the Russians and English had similar ideas and groups. 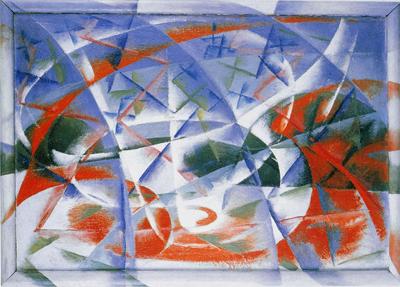 The Futurists expressed their love of speed, violence, youth, industrialism, and vehicular movement in every art from painting to gastronomy. Being lovers of everything modern, they drew inspiration from Cubism and in turn inspired other 20th century modernist movements such as Rayonism, Vorticism, and Precisionism.

“Our goals can only be reached through a vehicle of a plan, in which we must fervently believe, and upon which we must vigorously act. There is no other route to success”. – Pablo Picasso

The Futurists, being inspired as they were by the Cubists, also fractured objects, but they chose a subject matter that meshed with their obsessions, most notably – machines and urban scenes. Machines move, much like the philosophy of the futurists which focused on forward movement. One of the main visual differences between Cubist and Futurist art is the movement inherent in Futurist pieces. Some even resemble vortices.

While Cubist art still held to a bit of sentimentality, the Futurists eschewed anything over-feminine or safe in favor of the masculine driving forces of the new, fast, and modern.