The Hellenistic period in both history and in art refers to the era of the conquests of Alexander the Great and the subsequent spreading of Greek culture throughout the major cities and nations of Southern Europe, the Mediterranean, and Near East.

The art movement of this time period is mostly expressed through sculpture, which was more skillfully rendered in detail, anatomy, expression, and movement than the sculptures of the artist’s classical forbears. The Hellenists strove to spread the culture of classical Greece to the nations they conquered and to show the superiority of their culture. 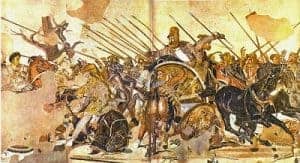 When Alexander was advancing the Greeks through victory, he divided up the conquered lands amongst his generals, the Diadochoi. These lands became dynasties, such as the Seleucids in the Near East and the Ptolemies in Egypt (the dynasty that bore Cleopatra), and the Antigonids in Macedonia. Other lands became alliances called leagues such as the Aitolian and Achaain League. These dynasties and alliances later broke up into smaller kingdoms infused with Greek cultural elements.

“Whatever possession we gain by our sword cannot be sure or lasting, but the love gained by kindness and moderation is certain and durable.”  – Alexander the Great

Grecian influence mixed with local cultures within these dynasties and kingdoms led to a variety of styles and subject matter in Hellenistic art. The interest in history that characterized this age was also a great contributor to the importance of art created. The libraries at Alexandria and Pergamon gave artists access to this history and that coupled with their knowledge of earlier artworks gave them a foundation on which to work with innovation and ingenuity.

As local religions became more secularized under Grecian influence and those religions, in turn, influenced Greece, artists found new ways to depict their own gods. For example, Eros is shown as a young boy and Aphrodite is shown nude. Diversity wasn’t only limited to religious versus secular influence, it is also seen in the addition of the children and elderly, people of other races (particularly Africans), and grotesques (ugly figures, often for comic purposes). 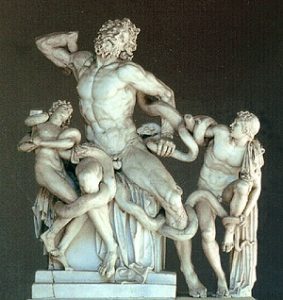 To properly depict these new characters of sculpture, the artists had to create a new variety of poses as not every subject was an athlete, god, or orator. Hellenistic sculptors preferred to base the pose on a spiral twist so that the viewer would see something of interest from every angle. Sometimes these poses seemed to have a purpose, and other times the reasons seemed trivial or within a very momentary action, such as a Satyr examining his own tail.

There is very little survival of painting from Greek Hellenism. What do survive are mosaics that are believed to be faithful copies of original frescoes. What scholars can determine from these mosaics is that Hellenist painters also employed turning movement, highly expressive faces, and realistic representation of nature.

“The arts alone give direct access to experience. To eliminate them from education – or worse, to tolerate them as cultural ornaments – is antieducational obscurantism. It is foisted on us by the pedants and snobs of Hellenistic Greece who considered artistic performance fit only for slaves.”  – Peter Drucker

A landscape painting in an incomplete set of illustrations of the Odyssey shows that a skilled artist rendered the illustration with practiced brushwork and competency in light, shade, and the ability to show distance in color.

There are also the Egyptian Hellenist Fayum Mummy Portraits that show how greatly the Hellenists influenced Egyptian art. The subjects of these portraits were living beings, not mummies, and were shown in realistic, natural, lifelike detail. They somewhat resemble the portrait styles of the mid-19th century. 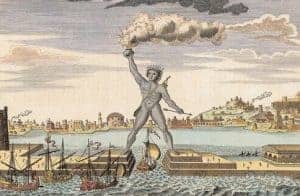 Metalworking soared to great heights during this period, so much so that the Colossus of Rhodes, one of the world’s lost seven wonders, was created from bronze casting and reached a height of over 100 feet (32 meters).

While pottery and ceramics had gone into steep decline, the gold and bronze smiths of the period greatly excelled at making vessels, jewelry, and figurines with detailed ornamental work. Subjects included mythical beasts, African figures, deities, and wreaths. Many pieces of metalwork were set with precious stones and gems.

The Hellenists discovered glass blowing and were able to create new forms of art. Molded glass lived on in the crafting of jewelry in Italy and jewelers also invented and perfected the cameo.