Art has been present in India for millennia and has evolved through religious, cultural, and political change. The area ascribed to Indian Art includes modern-day India, Pakistan, and Bangladesh.

India’s arid culture has preserved many of its ancient metal and stone and other arts from drier climates are preserved as well. Indian art forms consist of pottery, cave paintings, sculpture, and textiles influenced by Hinduism, Buddhism, Jainism, Islam, and the cultural values of the Hellenists and the peoples of the Indus Valley.

While many other cultures are known for what we find in their burial grounds and tombs, this is not so with Indian art. There has been a long practice of cremation in India. 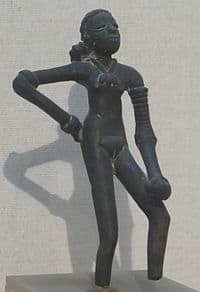 The oldest Indian art is in its rock art which is comprised of iron oxide cave paintings, figurines and carvings. There are over 1300 sites containing these works. Paintings depict scenes of hunting and daily life and include stone tools and weapons and show people with animals, including a man riding a horse.

“Dancing girl is about fifteen years old I should think, not more, but she stands there with bangles all the way up her arm and nothing else on. A girl perfectly, for the moment, perfectly confident of herself and the world. There’s nothing like her, I think, in the world.”  – Mortimer Wheeler

There are some figures imprinted on seals that defy scholarly explanation and are of combined beasts such as one that is part bull, part zebra, and has a horn. It may have been a religious or symbolic figure.

Early figures may have had associations with yoga or with the Hindu god, Shiva as they are shown standing on their heads or sitting cross-legged. The Indus Valley people may have created in a wood, as very little of their art survives.

The Maurya Empire of Northern India ruled from 322 – 185 BC and produced monuments in stone sculpture that may have been influenced by Ancient Persia or by Indian wood carving and sculpture.

The Maurya emperor, Ashoka was a convert to Buddhism and funded the building of domed structures called Stupa that housed the ashes of Buddhist monks or were used as places of meditation and marked places that may have been associated with sites from the life of the Buddha. Surviving from his time are rock-cut architectural sites such as the Pillars of Ashoka were there are several rock-cut large animals.

The Lion Capital of Ashoka was the official Emblem of India. 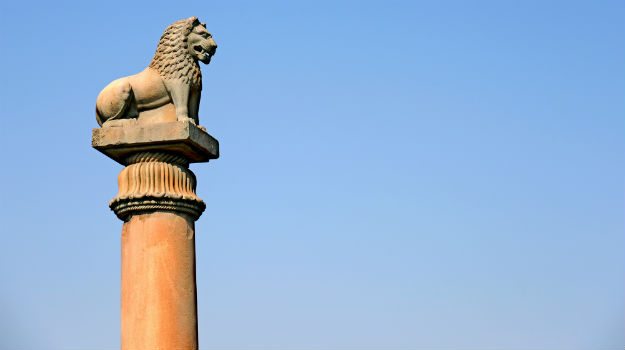 The majority of Buddhist art comes after this period, especially stupas with ceremonial fences and ornamental gateways that are decorated with reliefs narrating the life of the Buddha. Some additional sculptures are in relief and some are free-standing. There were also rock-cut prayer halls and monasteries known as viharas that have these examples as well. Some early sculptures have been found in caves.

The abundance of Buddha statues later influenced the religious art of the Hindus and Jain.

These arts were also influenced by the period of Indian Hellenism after the Greeks arrived during the conquests of Alexander the Great. Hellenism brings with it an allowance of secular arts and large statues of the wealthy and the royal started to appear.

The peak of North Indian art arrived with the Gupta period from which mostly sculpture survives, although there is evidence of painting being a popular form. Subjects and media included deities carved from stone, and especially notable were the very large Jain Tirthankara (spiritual teacher) figures.

The Mughal Empire which flourished after Islam had come to India saw a rise in painting. The emperor Akbar was intimately connected to the process of art and would often reward his best painters. Persian painters came to India and their styles melded to include Indian natural elements and this style later influenced painters during the British Colonial period.

When the Brits descended upon India, they established art schools in the major cities, making art less luxury of the wealthy and more accessible to common people.

The style that emerged was a conflux of Indian styles and British watercolor that romanticized the landscape and peoples of India. 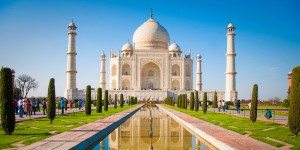 When India became independent of Britain, a group of artists founded the Bombay Progressive Artists’ Group. This group sought to express the independent nation and they were influential in changing ideas about Indian art. Contemporary artists from that time into today have expressed the values and cultures of their people through art influenced by modern movements such as abstract expressionism and others.

“Let the splendor of diamond, pearl and ruby vanish? Only let this one teardrop, this Taj Mahal, glisten spotlessly bright on the cheek of time, forever and ever.” – Rabindranath Tagore