Japan has had a rich and varied history with many visitors to the island nation. As such it is hard to characterize thousands of years of a myriad of inspirations into one particular style. However, the Japanese did, and have assimilated all of the various elements of their past into unique forms of art that are uniquely their own. The art movement across Japan created a lot of unique creative forms of art

Japanese art is comprised of silk and paper calligraphy and paintings, cut or folded paper arts, pottery, sculpture, embroidery, and many other forms.

Painting is the most prolific art as until modern times, most Japanese were taught to write with brushes, not pens, and the innate nature of such a practice gave them a great skill with the brush as an extension of them rather than merely a tool.

Japanese art is seen as early as its first settler, the Jomon people who arrived around 11000 BC and were nomadic hunters that eventually built highly populated cities. They were known for clay vessels decorated with silk cords, dogu (clay figurines), and crystal jewels.

The Jomon were followed by the Yayoi people around 350 BC. This culture moved to Japan from Tokyo and brought with them copper weapons, bronze bells, pottery wheels, and kilns.

“I encourage all you superior seekers in the secret depths to devote yourselves to penetrating and clarifying the self, as earnestly as you would put out a fire on the top of your head.” – Hakuin Ekaku

The Kofun period from 250-552 AD was a continuation of the Yayoi culture. Named for kofun megalithic tombs, this period is characterized by clay sculptures called haniwa that decorated tombs, bronze mirrors, and political symbols.

These three periods defined the prehistoric eras of Japanese art. Later periods are within the recorded history of Japan and flourished under governmental, societal, cultural, and religious influence.

Later centuries drew visitors to Japan, mainly the Chinese and these visitors inspired both writing and the visual arts. The Chinese influenced the pictographic characters of the Japanese alphabet, with symbolism being an important element. Symbols included various meanings associated with natural subjects such as plants and animals.

Landscape of Fall and Winter – Sesshu

While some techniques were learned from the Chinese in regard to painting, the Japanese style is more natural, and sometimes more abstract. Chinese artists were more structured and followed stricter guidelines, whereas the Japanese had a love of gaiety and spontaneous composition. The Chinese favored expansive vistas and landscapes, but the Japanese focused on closer subjects such as portraits, household scenes, individual plants and parts of plants, and single animals. Japanese painting was more fluid and less decorative than Chinese art and gave more attention to the essence of a single subject.

“In Japanese art, space assumed a dominant role and its position was strengthened by Zen concepts.” – Stephen Gardiner

Some Japanese painting and illustration take on a mystical quality not seen in other cultures outside of mythological stories. One example is an illustrated journal, Murasaki Shikibu’s diary. One illustration shows a scene in which the diarist is held captive while the imperial garden outside is shown with the moon shining on the water and mossy bank of a small stream.

Japanese gardening is not quite something that can be put into a museum, but its importance in Japanese art is paramount. Nowhere else in the world is a garden so masterfully designed by the rules of design and composition and these beautiful works of art are represented in painting, photography, sculpture, and even in the living bonsai miniatures of themselves. 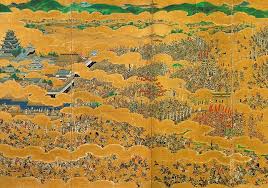 Japan also being an island of fishermen, the artists of the nation were also inspired by the sea. Paintings and textiles depicting crashing and curving ocean waves, intricately detailed fish, and the light of the sun and moon on the water were popular subjects.
The Japanese reverence for the natural world lends itself to the symbolism of natural elements. This reverence and the way in which it was executed over various art forms was of great help to the foundation of the Art Nouveau movement.

“If you study Japanese art you see a man who is undoubtedly wise, philosophic and intelligent, who spends his time how? In studying the distance between the earth and the moon? No. In studying the policy of Bismarck? No. He studies a single blade of grass. But this blade of grass leads him to draw every plant and then the seasons, the wide aspects of the countryside, then animals, then the human figure. So he passes his life, and life is too short to do the whole.” – Vincent Van Gogh

Other elements of Japanese culture that are not necessarily visual art contributed to the images created, such as the art of the beauty of the Geisha, simplistic yet harmonious interior design of homes and temples, and fashions such as the kimono, which was a textile art of great beauty.