A German art that flourished near the years of the Ottonian Dynasties that ruled Germany and Northern Italy, Ottonian art was a style that did not have much widespread use and was created within imperial circles, regional cities, and monasteries.

This Pre-Romanesque movement followed the Carolingians and was highly religious in expression, consisting mainly of illuminated religious manuscripts and metalwork created for courtly and religious people of importance, with the exception of art created for religious pilgrims.

Early Ottonian art is excessively dense, heavy, and almost gaudy, but later works are brighter and less structured with easier lines that evoke feeling rather than impress it upon the viewer.

“Ottonian Art” was not a termed coined until 1890 when Hurbert Janitscheck named it for the dynasty that ruled under the Ottonian Kings between 919 and 1024.

The Holy Roman Empire transferred to the Saxon Ottonian dynasty. This joining of empire and church created an atmosphere of religious and social excitement that would be expressed artistically in great works that blended the influential styles of prior movements into one gilded style. 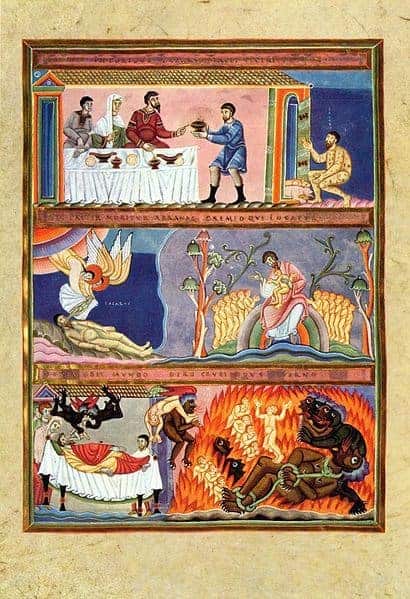 Because Ottonian art was made mainly for nobility and royalty of both political and religious realms, it was natural for those of importance to want “presentation portraits” along with commissioned or funded manuscripts. Patrons wanted to be well thought of in the way that esteemed spreaders of the faith such as Constantine and Charlemagne were. This is done mainly in a style that puts importance on the suggestion of a person rather than the realistic detail of their appearance.

.Elements of the portrait tell the story of the subject. For instance, in the case of rulers, the subject will be surrounded by military and church officials and icons representing the high points of the period of rule.

“There are, broadly speaking, three directly analogous progressions in the history of art: in Antiquity, from the blockiness of Egyptian art to the loose, painterly handling of Roman landscape frescoes; in the Middle Ages, from the tectonic emphasis of Ottonian art to the flamboyance of late Gothic; and in later times, from early Renaissance linearity to the sparkling web of light spun by the Rococo. The wheel turns full circle, but more rapidly each time. ” ― Klaus Berger

The Ottonian illuminations are some of the most opulent and exquisitely rendered manuscripts from the tradition of illumination. Being the seat of the Holy Roman Empire gave the monks the resources and the money to create with abandon as much as a monk can. The monks chosen were the most talented and the materials of the highest quality as these were commissioned by the highest rulers of both religion and monarchy.

Treasure bindings were common and with the marriage of Princess Theophanu of Greece to Otto II, the enamels and ivories popular in Byzantium began to be used in addition to the metalwork already present in book covers.

The general public did not often see beyond those opulent covers, but if they had they would have seen more highly illustrated texts than seen elsewhere. 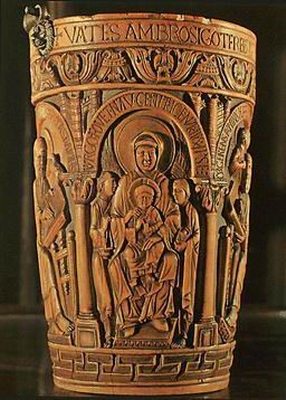 Ornamental decorations seen in churches were often either gilded or made of gold or silver.

This was not new to the world, but the Ottonians had their own style using precious gems, ivory, cameos, crystal, and enamel to create elaborate art on art.

The base piece, be it a cross or a vessel, was already beautiful in its own right, yet it might be decorated with projections and reliefs in the shapes of things of the natural or man-made world, topped with precious stones. Reliquaries received special attention as they held the relics (small pieces of a human saint or a religious object) so important to the church and to the faithful.

Surprisingly this at this late date and within the Christian church, the stones decorating reliquaries was believed to have magical and medical aspects.

Work in ivory during this period was richly detailed and finely executed. Created mostly as covers for illuminated manuscripts, ivory carved panels often bore religious scenes, especially those of Jesus being crucified. Vessels for holy water were also carved from ivory and are very rare outside of the Ottonian period. These vessels, called situla, were carved from large elephant tusks into elaborate scenes from the base to the top. 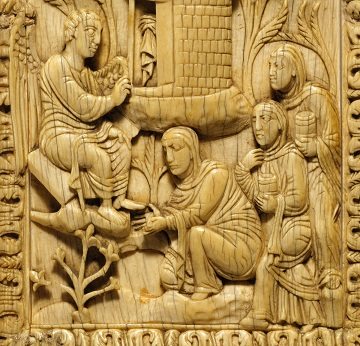