Parthian and Sassanian art refers to two periods in art in Iran and its held lands in ancient times. Parthian preceded the Sasanian Dynasty and was a mixture of indigenous Iranian art and Hellenistic influence.

The Parthians were subject to the influence of other cultures which prevented them from establishing definitive styles; however, they were unique art in the Middle East for having front-facing figures. The Parthians participated in the Hellenistic fashion of free-standing sculpture.

The Sassanids established a more unique style expressed in architecture, relief, metalwork, painting, and carving covering subjects that were of royal interest. The frontal view went into disfavor, replaced by a three-quarter profile.

Parthian Art begins with an inscription by King Darius I referring to Parthava as the land of modern-day Iran, and later the entire empire of the region. While scholars date the era to 247 BC, the exact origins are unknown to history. The first known ruler was Arsaces who extended the lands south of the Caspian Sea.

Most of the art of the central lands of Parthia is lost, but there are remaining examples from the edges of the empire which was compromised of Mesopotamia, the Iranian Plateau, and Syria. The everyday objects and lesser arts are not as common as those items that were made for royals, noblemen, and important people in the cities.

The stylistic norms of the period were intellectual approaches to figure making, ornate dress, front-facing figures, and high levels of detail. Borrowed techniques and styles from each individual region and from Hellenist and other foreign cultures were combined with Parthian art to create eclectic variances.

Parthian sculpture, especially in Palmyra, depicted the deceased and decorated burial grounds. The women are usually dressed in the fashion of the Hellenistic culture, but conversely, the men are dressed in traditional Iranian pants. Both wear heavy jewelry and faces seem to be stylized to flatter the deceased. Sculptors also worked in relief, with two main styles, a heavy one that is nearly sculpture and flat relief that is only a few centimeters in depth. Reliefs were often rough because of the surfaces available and were composed in the same manner as paintings. Here, too, figures are seen in profile. 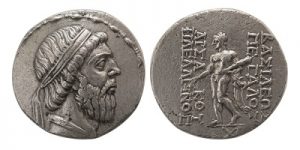 Parthian art – Coin of Mithradates I

The Sassanid Dynasty ruled for 400 years from their defeat of the Parthians in 224 AD to Islamic takeover around 650 AD. The art of the period focuses on chivalry, royalty, hunting, and battle and bear an early resemblance to the composition of coats of arms. Sassanid art and architecture had a great influence on the later Islamic cultures of the area and therefore much of European Islamic and Byzantine architecture, particularly in regard to arches.

Sculpture, with the exception of the Colossal Statue of Shapur I, is mostly absent in free-standing form but abounds in relief, both in number and in quality. They focus on significant events in the lives of the nobility and rulers. Some include communion with the gods. Some reliefs were painted in their day, and give the detail and depth of the compositions would have been magnificent to the viewer. 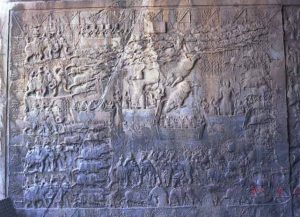 Metalworkers created art unique to the Sassanids. Shells made of silver and gold are opened to an etched scene. Subjects are whimsical. For example, a prince might be shown hunting astride a horse that is midair as he is about to catch a lion; another scene might include mythological or fantastical creatures.

Coins showed great detail in portraying the ruler of the time. The coins are so distinctive that they are used to date other art and artifacts. The front of the coin sometimes shows a family member along with the profile of the ruler, and the back may show an eternal fire along with other elements.

Decorative wall art included both painting and stucco relief. Not much is left of the paintings of the period, but it is known that a school for painting was founded by Mani. Stucco was used to cover bricks, which were thought to be ugly, and then etched with patterns of florals and animals before being painted white.