A movement led by Cezanne, Van Gogh, Seurat, and Gauguin, Post Impressionism got was a French art movement in which artists wanted to move away from the naturalism of Impressionism and its focus on the optical effects of light. They continued some Impressionist practices, like the use of pure color, but did so with a heavier hand and with a focus on more abstract qualities, arresting and spontaneous color, and distortion of often geometric form.

Impressionism was one of the first hallmarks of modern American art, and art was moving toward intellectual motives and sources of creation. The Post-Impressionists were concerned with reintroducing structure to composition and in applying or expressing greater meaning and into their paintings. Some of these ideas were shared, but this group of artists held onto their own individual thoughts and did not intend nor see this as a cohesive movement.

The movement not being an art movement as such has its origins in the coining of the name by Roger Fry, an art critic in 1910 looking to define the difference between the established Impressionists and the new crop of younger artists. 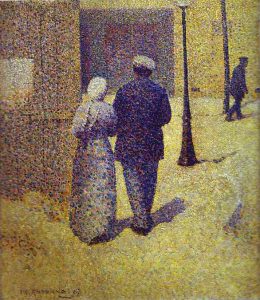 One of the most important aspects of Post-Impressionism isn’t what the viewer sees on the canvas, but what the intent of the artist was. For some, it was to bring out personal introspection, memories, and dreams, and fantasies into the art to make a connection to the mind and emotions of the viewer. For others, it was to investigate the science of optics (as in the case of Pointillism) and how the structure of light, color, and shaped ordered the world.

Whatever the root motivation for each individual artist, this disparate group was cohesive in its abstraction. All of the Post-Impressionists were abstract from earlier styles and certainly from realism and what they learned, invented, and created was the influence for the succeeding generations of abstract and expressionist artists.

Georges Seurat had a theory that if the eye is looking at two or more colors at once it will on its own mix them together to create the hue that defines the color of an object. From this, he, along with Paul Signac, created Pointillism, the art of painting with individual dots of color to create a scene that is cohesive from far away, but chaotic color up close. 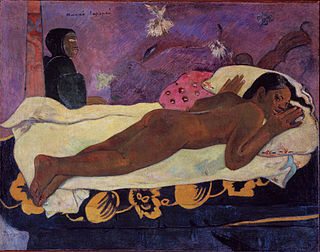 Paul Gauguin was a master of light and dark value rendered in vivid, seemingly unnatural colors in flat dimension. He spent much of his career traveling in search of nature and natural peoples unspoiled by industry and overemphasis on social success. He visited many island nations were he created his most iconic works.

“Life has no meaning unless one lives it with a will, at least to the limit of one’s will. Virtue, good, evil are nothing but words, unless one takes them apart in order to build something with them; they do not win their true meaning until one knows how to apply them”. – Paul Gauguin

Many artists intend to impart their inner emotional worlds to the viewer, but there are few that were as successful at that endeavor as Vincent Van Gogh. His work was characterized by intense brushstrokes and dark or arresting colors that jar the viewer in some instances, depress in others, and in some delight. Van Gogh did not shy away from what would have been considered insignificant or unattractive scenes, such as his bedroom, peasants working, or his own self-portrait – it was this type of work that did have significance to him, that he thought held greater meaning than the trivial picnics of Impressionist past. 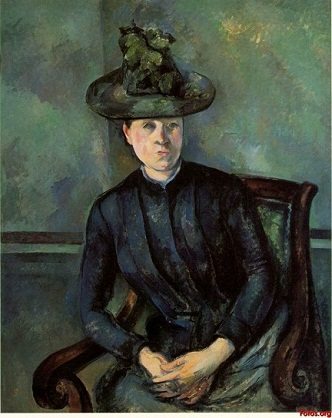 Paul Cezanne’s primary interest was in the geometry of natural forms. He was also interested in how the eye perceived shape and investigated how optics worked in relation to perspective. Cezanne wanted to break down art into shapes such as “the cylinder, the sphere, the cone” to explore how those shapes were interpreted by human eyes. The work and ideas of Cezanne were an early inspiration for Cubism and futurism.

“I could paint for a hundred years, a thousand years without stopping and I would still feel as though I knew nothing”.  – Paul Cezanne

The Post-Impressionist movement had many other keys and influential players, such as Lautrec and Rousseau, but these four were the key founders of the movement and their work inspired other artists of the time and paved the way for other techniques, paths, and movements in modern art. 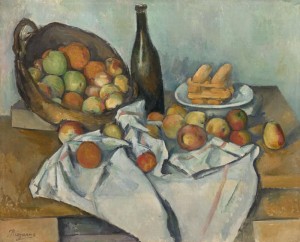 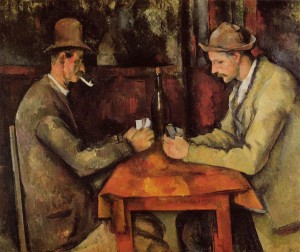