Art in America existed long before the arrival of Columbus and was as, or more in some cases, sophisticated as the art of the known world. Pre-Columbian art in the Southern and Northern American Continents and the Caribbean islands was created from nearly all mediums with levels of skill from rudimentary to mastered.

Visual art was especially interested in how humans fit into the physical and the metaphysical worlds, humanity’s place in the workings of the heavens, and in the histories of the ancestors. Some forms of art were for record keeping, counting, trade, and correspondence.

While the title Pre-Columbian refers to all of the Americas and its islands, the largest focus on the period deals with Mesoamerica, Central America, and South America leaving Native North American and Inuit art in their own categories.

The first major civilization in Central America was that of the Olmec who lived from about 1200 – 400 BC. They lived in the tropical jungle-like atmosphere of South Central Mexico and were responsible for very large heads over 8 feet tall sculpted from boulders. They also carved in Jade, frequently focusing on figures of babies, but also carving animals, fish, and birds. The colossal heads of the Olmec also have very baby-like features, though they are of grown men, sometimes in military headdress. The Olmec were the first to build pyramids and ceremonial complexes in Central America. 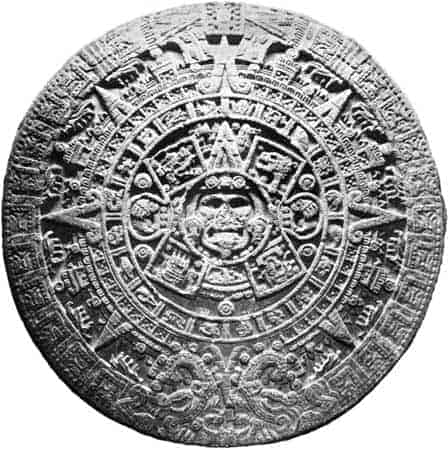 The Maya were the second great civilization and were mostly an agrarian culture flourishing from 200-900 AD. They painted petroglyphs and murals, and sculpted and carved in wood and rock. The Mayans are responsible for one of the most accurate calendars known to man that recorded time in advance of over 1000 years. Their calendars are elaborately crafted with hieroglyphics and figures. Their wall murals were as vivid, distinctive, and well-rendered as the European and Mediterranean art of the same age and type, if not more so.

The Toltec were a warring culture with the dedication to ruthless gods like Quetzalcoatl who demanded worship and sacrifice. They are best known for the large and numerous standing statues guarding their ceremonial complexes and for their carvings in relief.

The Mixtec existed both before and after the Aztecs and while the Aztecs flourished, they were under their power. They produced paintings with flatly painted figures in bright colors. One example is of a family tree done in figures rather than writing.

The Aztecs were one the most powerful empires in the Americas. They were highly advanced artists that worked in mosaic for both architectural designs and for use in ceremonial masks. Aztec artists were adept in painting vividly colored frescoes, and in metalwork for adornment and decoration.

The Chavin Civilization of the Andes mountains in Peru were potters, sculptors, and carvers that lived from 1000 – 300 BC. The subjects of their works are often anthropomorphic creatures with the human-shaped bodies but animal features. Animals important to the Chavin were birds, reptiles, and large cats, most importantly, the Jaguar. The Chavin were also great painters of murals as can be seen at the Chavin de Huantar site.

The people of the Nazca river valley are known for the lines that zigzag across the desert landscape in the shape of birds and other mysterious subjects, however, this is not the only art produced by this culture. They were very imaginative in the creation and decorations of their polychrome ceramics, mostly involving human and animal figures, sometimes in abstraction.

The greatest artists of the pre-Columbian world were the Moche from the northern river valleys on the coast of Peru. Their art was exceptionally realistic and finely worked. They are known for portrait vessels, which have highly detailed and brilliantly done heads. Scholars believe that the Moche gave spiritual significance and communicated spiritual ideas with their ceramics. Subjects of art ranged from natural elements and animals to conceptual subjects like gods, demons, and sex.

The Wari Empire of the Andes were also skillful creators of ceramics, especially creating pieces that venerated the Staff of God, the oldest deity to be visually recorded in the Americas. He is often shown holding a staff in each hand. The Wari also excelled in architecture and sculpture, especially in stone. The Gate of the Sun includes The Staff of God surrounded by religious symbols.

The Staff God of Tiwanaku

The goldsmiths of the Chimu Empire on the Peruvian Coast created portraits in silver and gold. They also improved on a previous ceramic art known as Sican. Their architectural achievements are displayed at the palace of Chan Chan. The Chimu people also created an art of feather working in which elaborate headdresses were made featuring the animals of the water and air.