Roman art spans the centuries of the Republic and of the later Empire that governed the lands of the Mediterranean, Europe, and the British Isles from antiquity until the beginning of the Dark Ages.

From its own heritage and its conquests and trade, Rome developed a very eclectic artistic palette. Rome was not only influenced by the Greeks but also, and more immediately their forebears, the Etruscans. Inspiration also came from the lands they conquered, most notably Egypt. Italy itself was not without artistic representation leading to an influence on Roman art.

The arts of Rome were not mere copies of Greek achievement. The nation and the empire created works that contributed a great deal to the advancement of man in politics and knowledge, and also in architecture, design, and the visual and performing arts. 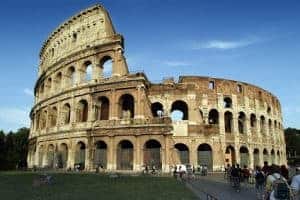 The beginnings of Roman art in relation to date on not entirely clear as Rome existed in the days of the Etruscans and once Rome took hold of Italy still needed time to firmly establish a culture. When Rome achieved victory in the Punic wars they were finally confident enough to feel pride in their culture and began to create rather trade or buy.

“If you go back to the Greeks and Romans, they talk about all three – wine, food, and art – as a way of enhancing life.”  – Robert Mondavi

In the beginning, Rome did take most of their artistic influence from the Greeks whom they saw as a superior culture regarding artistic endeavors. Roman consumers also saw art as a status symbol and therefore wanted the best, which to them was Greek art. Roman artists met the challenge by patterning their early works after the Greeks.

One arena in which the Romans excelled above all other art movements was in architecture. The Roman arch, the aqueducts, and the multiple tiers of the Colosseum were engineering masterpieces that advanced the field of architecture the world over. Roman roads and buildings are still in use today because of the masterful engineering and craftsmanship employed by Roman artists and designers. 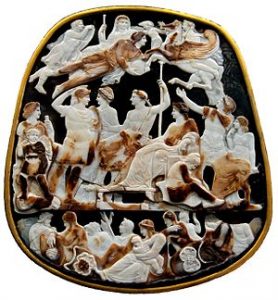 Roman sculpture followed the Grecian style for many years but established their own style in creating a sculpture for their own unique social rituals. Romans, like the Etruscans before them, decorated tombs with portrait sculptures of the deceased and the Romans excelled at it. They also made great strides in relief work, with the triumphal arches and columns giving evidence to that fact in the exquisite reliefs narrating stories on their surfaces.

“The Romans thought of themselves as the chosen people, yet they built the greatest army on Earth by recruiting warriors from any background.”  – Amy Chua

Sadly, in the 3rd-century Roman sculpture and relief declined to such a point as to be heavy in nature and overly simplistic in design. Portrait sculpture lent itself more to unfinished caricature than to realistic portrayal.

Citizens that could not afford relief built into the wall of their home that wanted to enjoy them before they had one commissioned for their sarcophagus could turn to Campana pottery reliefs for economical versions. Small sculptures of other sorts, such as those made from glass, silver, or cameo were also available.

Roman paintings have not survived on a large scale; however, there are murals from Pompeii depicting seaside life, paintings in the Catacombs, the grottos of Nero’s palace, and the Fayum mummy portraits which are portraits of living people attached to their burial housing after death. Romans used secco painting (on a dry rather than wet wall), frescoes, and mosaics to decorate the walls of homes, palaces, and tombs.

As Rome became Christianized and the seat of the empire moved to Byzantium, Roman art was absorbed by other more fashionable trends of the day including Byzantine art and LaTene Celtic art.