Roman art spans the centuries of the Republic and of the later Empire that governed the lands of the Mediterranean, Europe, and the British Isles from antiquity until the beginning of the Dark Ages.

The Romanesque style dominated most of Europe during the 11th and 12th centuries, especially in architecture. While the paintings and illustrations of the day do not very much resemble Roman art, the columns, arches, and other building details of the day do resemble the Roman architecture and as such caused 19th-century art historians to dub it Romanesque.

The Romanesque period, however, retains its own unique style that leans toward the grandiose more than the more harmonious nature of true Roman style.

The Romanesque period is lavish, grand, and even magnificently massive.

The rounded arches are taller; the apses are more frequent, more ornate, and certainly more gilded.

Columns surpass the Corinthian columns decorative style into fully carved scenes and narratives. Illuminations, similarly, are more ornate and grand than those that came before.

Paintings are vivid and bright but not rendered naturalistically or realistically and are done with a hint of religious icon influence.

The Crusades brought much wealth and higher exposure to Christianity to the European continent in the late middle ages and the beginning of the Romanesque period. Churches were in higher number, along pilgrimage routes, and in rural areas outside of cities for the first time. While monasteries continued to be major producers of great artworks, the wealth of the period financed the ability for laypeople to again become involved in paid artwork. 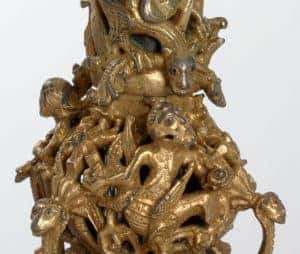 Religious art was very much in demand on the heels of the Crusades from which were brought home relics that must be housed in church buildings befitting the honor.

Both lay and monasterial artists had become skillful and talented in the working of stained glass, metalworking, and sculpture and some of them, such as Nicolas of Verdun or Master Hugo were sought after for important commissions from both the Church and from other patrons.

Owing to the travel of pilgrims along pilgrimage routes, the moving about of clergy, and the touring of the Crusades, and the beginnings of Romanesque style in church architecture, the movement spread quickly across Europe from the far south to the far north, and even the British Isles (where it has coincided with Norman art).

“Could we bring ourselves to feel what the first spectators of an Egyptian statue, or a Romanesque crucifixion, felt, we would make haste to remove them from the Louvre. True, we are trying more and more to gauge the feelings of those first spectators, but without forgetting our own, and we can be contented all the more easily with the mere knowledge of the former, without experiencing them, because all we wish to do is put this knowledge to the work of art”. – André Malraux

Almost all Romanesque art, whether it was made for secular patrons or for the church, was religious in nature.

Painting focused on Christian themes directly related to Christ-like the Last Judgement, Christ in Majesty, and scenes from his life.

Churches were painted in such large scale that nearly every surface was colored with vivid bold paintings and murals depicting the Christian scenes just mentioned and, additionally, the Virgin Mary (and scenes from her life rather than Christ’s if the church was dedicated to her), the Four Evangelists, Christ the Redeemer, and other Christian motifs.

These paintings followed a standard structure with the greatest figure in the dome of the apse, the saints and apostles on the walls or arches, the north wall would be covered in Old Testament scenes, and the south in New Testament. The rear west wall would finish with Christ sitting above The Last Judgement. 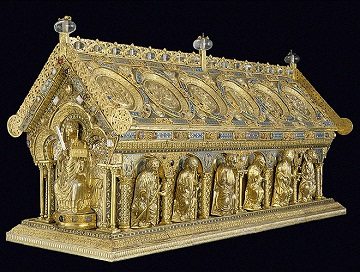 The sculpture was a more revered art in the Romanesque period than painting and some sculptors gained notoriety. Much of sculpture was made for the churches and included reliquaries, altar frontals, and other pieces that were decorated with metalwork and with enamel. Gold and bronze smiths also created elaborately ornate altar ware, such as the bronze Gloucester Candlestick. They also created larger works such as columns and doors in bronze.

“Gregorian chant, Romanesque architecture, the Iliad , the invention of geometry were not, for the people through whom they were brought into being and made available to us, occasions for the manifestation of personality”. – Simone Weil

Ivory carvings were used on both small and large scale. It was used to create book covers, jewelry, small crosses, and the large and very intricately carved Cloisters Cross.