The art of the peoples of South Africa is the oldest known art in the world, dating back over 100,000 years. The archeological discoveries there help scholars to date the evolution of cognition and intelligent progression.

South African art in the modern era is influenced and molded by the trials of the South African people under apartheid and the years of European involvement in the area expressed in the found art of Africans making sense of modern traditions, and the Dutch influence on both white and black artists.

With the many tribes, languages, cultures, and races of South Africa, there is a very diverse and eclectic art scene in historical and contemporary South Africa. 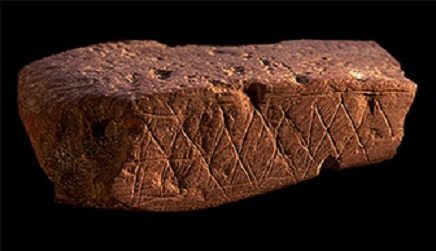 The very beginnings of art, not just for South Africa, but for the world, were found at the Blombos cave. This ancient art studio contained paint pots in the form of shells that were used to store mixed paints from disparate sources. This proved to archeologists that early man may have been more sophisticated than previously thought. Whatever it was that they painted, be it clothing, faces, or the walls of the caves, the South African climate, particular in this sea cave is not conducive to the permanent survival of art.

What has been found of ancient South African art are the cave paintings of the Khoisan, San, and Bushman tribes dating to 10,000 BC. Other cave painters left behind scenes of hunting and domestic life, and also of spiritual and magical art. The colors used are derived from nature and are therefore mostly in earth tones such as black, yellow, red, orange, white, and gray.

“The drawings don’t start with ‘a beautiful mark’. It has to be a mark of something out there in the world. It doesn’t have to be an accurate drawing, but it has to stand for an observation, not something that is abstract, like an emotion”. – William Kentridge

Cave scenes portray battles and hunts, animals, dancing, and later, white hunters on horseback. The figures are shown in long forms in action and some figures that are either dancing or participating in the shamanic rituals are costumed in clothing in unusual patterns and prints and are often wearing masks. It is unknown if these are people drawn from life, or if these represent symbolic characters. The symbols, themes, and subjects of the South African cave paintings are similar to what is seen in cave and rock paintings all over the world.

The Boers, better known as the Dutch, and the English came to South Africa in the mid-19th century and the art of the Europeans that remained and the traditional art of the indigenous tribal people began to mix. The end of the 19th century spurred some artists to move away from this mixed art and begin studying art in realism, creating a unique art free from both European and native influences.

Under European colonization, the native people suffered under racial segregation and prejudice. The English established museums, universities, art schools, and other education opportunities, but they were not ones open to the indigenous. However, white intellectuals and artists seeking inspiration from the art and culture of the African people sought them out and some artistic instruction was imparted by collaboration.

As the tide of the world was changing to strive for respect of all peoples, the artists of South Africa, both white and black began to protest against apartheid, and against the cultural boycott on South Africa. Their success led to South African artists stepping up to a level global playing field.

“I don’t know how one actually would define obscenity. I’m sure the definition is different according to the age one is living in”. – Jane Alexander