The Steppes refer to Ancient Scythia as it was known to the Greeks, but other ancient historians include the lands from the northern coast of the black sea, almost to the eastern coast of Manchuria, basically dividing northern Asia from southern Asia. The definition of steppe is a grassland region without trees, rivers, or lakes.

This vast area was traveled by nomadic tribes and produced a variety of rich art. Nomadic peoples typically do not create on a grand scale, and such is the case with Steppe art which is mostly decorative in nature or made for adornment.

The conditions and environment in which the nomadic tribes of the Steppes lived were those of constant movement and political maneuvering. Nomads in Russia paid tribute to the Golden Horde, the northern nomads blended with the forest tribes, and those just south of Kazakh blended with the permanent residents. Mongolia and China were at war most of the time and everyone had trouble from the Mongols. 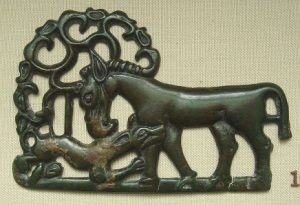 The people of the steppes, being nomadic, did not leave written records or writing of any kind to speak of. However, the nature of the designs in the objects they did leave behind gives a clue about the course of their lives, practically and spiritually.

Scythian art or Steppe Art was influenced quite bit by the extensive amount of trade travel that took the Scythians across all ends of Europe. Chinese and Celtic influences are both present in their artwork, as is the influence, and sometimes additional, of Greek art.

Scythian objects crafted from gold were the most prized objects, but they created with silver, bronze, alloys, bone, leather, and wood as well. Bronze was the most common choice for the common people. Objects were further decorated with turquoise, amber, and carnelian stones or with fabric applique. Subjects and motifs were mostly from the natural world, especially animal figures in stylized forms. Objects included jewelry, combs, statuettes, figures, and other smallish objects. Motifs included hedgehogs, deer, griffins, dragons, camels, ibex, and horses. The pictured animals are never stagnant but are in action, sometimes aggressive action and at others playful. At times animals are fighting with each other. Mythical beasts are common from different traditions.

Scythian warrior carried round shields that were sometimes decorated with golden stags that look as though they are either mid-jump or lying down, but no matter which is alert and ready. Even though some animals are shown fighting or in battle, Scythian animals look as though the artists and owners had a great affection for animals rather than finding them menacing. 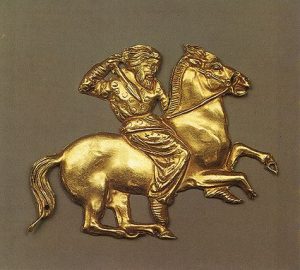 Being a nomadic culture they also created decorative utilitarian objects for their tents, horses, wagons, weapons, and other objects of daily life. Animals depicted on items were believed to give the wearer or user the primary aspect of the animal’s natural behavior.

The Pazyryk culture of Siberia, neighbors of the Scythia also worked in gold and produced similar art, but their versions show more Chinese influence in the same way that the Scythians showed a greater amount of Greek influence. Pazyryk tombs contain highly decorated embroidered clothing that is additionally adorned with applique. Other applique items were large wall hangings depicting mythical beasts and goddesses.

Herodotus described a Scythian city purported to be the capital, called Gelonus, but evidence of it was not found until recently in the Ukraine where archeologists found pottery and workshops. Other governmental structures were those that had an ascribed chieftain, and on the western edge of the territory in the forest steppes of Ukraine, a burial ground of just such a ruler was found undisturbed. It is dated to a time when Scythians were beginning the transition to a sedentary way of life. 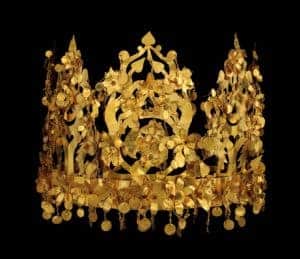 Much of the art of the steppes is housed in museums in Russia and was for a long time not available for viewing by foreign eyes. However, the pieces now occasionally tour so that they can be enjoyed by other cultures.