The Northern Renaissance refers to the Renaissance after 1497 outside of Italy and north of the Alps. There are many subdivisions of the movement that were inspired by artists commissioned to come to these areas from Italy and through learning centers and printed books.

The Northern Renaissance art began when Venetian artists were commissioned by the King of France to send art to the great palaces he was building.

From France, Renaissance ideas spread to other countries and cities, France itself, and through the lands of the Holy Roman Empire. As writers and professors began to educate people about new ideas and discoveries of old, the movement spread again into Scandinavia and Great Britain. 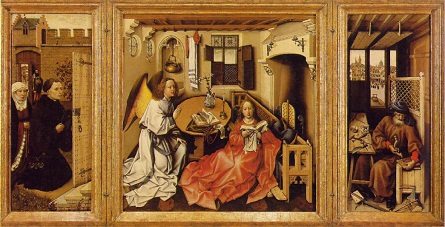 The Merode Altarpiece The Northern Renaissance

Prior to the Renaissance, much of Northern Europe was under the yoke of feudalism and also the strain of the Church and its values, dictates, and taxes. As these countries became independent of these burdens, people were free to pursue individual interests.

Money had become a stable economic exchange and as serfdom had mostly ended, people were being paid wages and were able to advance in life.

“Tangible piece of luminous matter, they confront us with a reconstruction rather than a mere representation of the visible world.” – Jan Van Eyck

With the Roman Catholic Church losing power to the Protestant Reformation and the whims of kings and other points of contention, secular thought and freedom of mind were becoming more prevalent. Exchanges of ideas such as Humanism and the enjoyment and investigation of science, music, art, and literature helped foster the foundation for creating philosophy based on new discovery and more open minds.

Secular literature and art broke away from the forbidding nature of the Church and works were created that would have never seen the light in the centuries before.

Books were easily distributed with the help of the printing press and non-noble households now had access to ancient classical texts as well as new scientific theories and historical discoveries. The Bible was available in living languages for the first time, letting hitherto unknowledgeable people access to what was only understood by clergy.

“No single man can be taken as a model for a perfect figure, for no man lives on earth who is endowed with the whole of beauty”.  – Albrecht Durer

Artists in the visual arts learned of Renaissance styles partly through travel to Rome. Some who did so frequently was nicknamed Romanists. Other artists, such as the German and Dutch, held onto religious subjects even though they had fallen out of vogue elsewhere in favor of history, landscape, mythology, and genre painting.

Portrait painting still mainly focused on nobles and royals and those that were able to afford it, with the exception of Johannes Vermeer who painted servants and everyday people such as in the case of The Girl With the Pearl Earring. 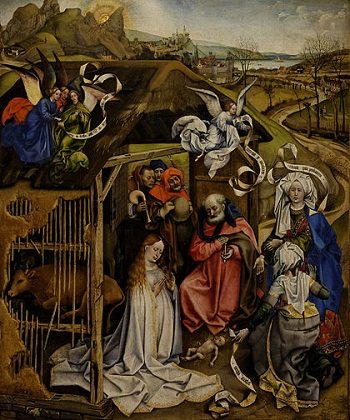 The Nativity The Northern Renaissance

Painters worked mainly in rich oils to create luminous effects in their painting through glazing techniques and others. They rejected the linear perspective and continued with empirical, which is perspective based on observation. This is in contrast to the Italians who wanted to create based on scientific, rational bases. The Northern painters wanted to explore the magical mystery of nature and objects and present them to the world in detail.

This paved the way for the modern understanding of how space, distance, and time affect color and how to manipulate that knowledge of canvas. To explain, this effect is seen in the differing colors of mountains in a photograph, with the foreground mountains in their true colors, but more distant mountains showing in purples and blues.

Through these two areas of focus, color, and perspective, they were able to devise aerial and color perspectives as well and these four things became standard artistic tools in later Realism movements.

“And what is the potential man, after all? Is he not the sum of all that is human? Divine, in other words?  – Hieronymus Bosch

Most of the visual art activity in the Northern Renaissance occurred in the “low countries” of Holland, Flanders, and Germany. However, the Renaissance was influential in the works of many of history’s greatest writers such as Shakespeare and Christopher Marlowe. It was also important to create the zeal for free thought that prompted discovery and new eras in human advancement.