Although Rococo was a response to the heaviness and grandeur of Baroque, its attempt at delicacy was only lighter in its own time. Later movements would look back on it as being opulent in its own right.

Rococo tended toward fluidity in line, floral motifs, grace, and femininity. The French aristocracy were the great patrons of the period in juxtaposition to the stolid Church of the later Baroque. As such, a playful and witty essence is felt in the style of Rococo.

This period saw cohesiveness in design so that painting wasn’t merely a painting and room not merely a room, but all elements were designed together or at least with an awareness of the side by side elements. The design of a room was comprised of much ornamentation in the gilded chairs, mirrors, and plasterwork, and designs were present in the carpets and in reliefs on the walls. 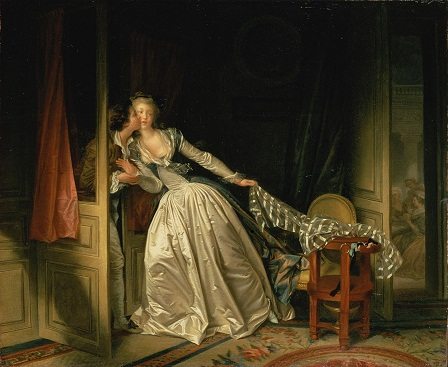 The colors of the period were in part determined by interior design which favored interlacing of delicate plaster S and C curves, and other, often shell-shaped, plaster adornments on the walls. Some were gilded, and gold was usually the heaviest color in a room, as most other colors were pastel or light in nature. Mirrors enhanced the airy spaces and their gilt frames added to the luxurious feel of the room.

Rococo has its roots in late Baroque when architects from Italy were enticed north by the church and their work was seen by the wealthy families of the regions they visited. They commissioned these artists and architects to design their palaces.

When Louis XIV took the throne and moved the center of court life away from Versailles, Rococo took hold throughout French society. Louis the XV would be a “perpetual adolescent”, so the playful nature and delicacy of the Rococo style were well suited to his reign. 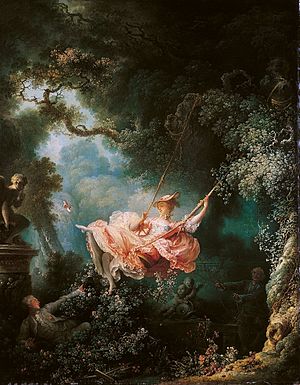 The style was spread by exposure through the illustrations of French engravers in printed publications and by word of mouth. Its reception overseas was slightly derisive regarding the architecture, but the design of its silver and gold objects were appreciated. Britain was fond of the porcelain and textiles of the period and incorporated some Rococo principles into their textiles and ceramics.

“Imagine that you’re stuck in a power wheelchair so you can just slightly move your arms or don’t move your arms at all and then suddenly with the arm, you can eat by yourself, drink by yourself, instead of having a caregiver that is going at your home to feed you”. – François Boucher

The visual arts within the Rococo period went beyond interior decoration and the style of the period was evident in painting and in sculpture.

Painters had a fond use of pastels, light, and colors that evoked a more feminine and delicate essence than the harsh, bold, and dramatic paintings of the Baroque period. Subjects tended toward scenes of fun, whimsy, laughing, and love and sometimes included positive mythical creatures, angels, and cherubs. Landscape painting lost its harshness and majesty in favor of the calm and pastoral. Landscapes often included people. 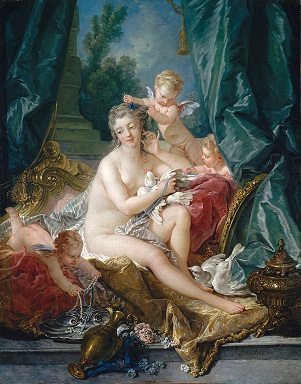 The Toilette of Venus – Rococo art

Concerning sculpture, marble was mostly left behind to let in the lighter and more delicate porcelain. Porcelain sculpture followed much the same subject matter as painting with a focus on happiness, frivolity, and flirtation.

“If necessary, I would even paint with my bottom”.  – Jean-Honore Fragonard

The end of Rococo when authors, artists, and activists pointed out the superficiality of the aristocracy and the flippancy of the artistic styles associated with it. Germans saw the period as that of “pigtails and periwigs”.

Rococo was succeeded by Neoclassicism which looked to harmony after two periods of excess.