Norse art is that of the Scandinavian nations and the nations, like Britain and Iceland, they conquered. Common themes are shared with other area traditions, such as the Celts and Germanic tribes.

Being seafaring, exploring nations, their art is found in myriad places and those places had their own impact on the art of the homeland. Artistic elements are present in their everyday utensils, weaponry, ship crafting, and armor.

The Scan Davian Norsemen’s period of Viking raids and Viking culture lasted form the 8th through 11th centuries. Their first raid in recorded history was when they landed in their longships on the monastic Island of Lindisfarne in the year 793.

They continued their raids throughout Europe, even as far as the Black Sea, and extended trade and exploration to Greenland and Iceland. Eric the Red discovered America centuries before Columbus. 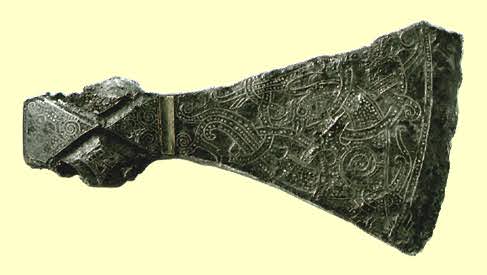 When Vikings raided a land, they often colonized it or at least left people behind for other purposes. The fear people had of the Vikings made them advantageous trading partners for the raiders, so they would sometimes return to the same areas to trade again.
Viking art is found in ship burials and in the settlements of colonies where they traded or colonized.

Viking arts were used a variety of materials, and what is left are the hardier examples such as ivory, bone, wood, metal, and stone. Not much is known of textiles.

Viking artists were fond of wood carving, as it was a faster medium for a seafaring artist, it was easy to carve, and the material was plentiful. Ship burial carvings and the carvings of Scandinavian churches allow scholars to see what other arts may have looked like.

Metalsmiths created jewelry for both sexes in gold, silver, bronze, and gilded bronze. Some solid gold examples have been found. Women were tastefully adorned with symmetrical openwork brooches on each shoulder and a necklace. Men also wore brooches with long pins, rings, and arm and neck cuffs. Sword hilts and other weaponry were highly decorated.

Viking burial practices included the addition of grave goods for the afterlife and this included objects of decorated metalwork. Goods included everyday metal objects, but some sites included treasure hordes containing precious items that were never recovered in their time.

Viking art is divided into styles. The Oseberg style, taking its name from the Oseberg ship grave, is known for its gripping beast motif, which grips the borders of a neighboring beast, or its own body, with its paws. The head of the Oseberg ship is decorated with intertwining animals carved into the bow which rears up like a yawing animal. 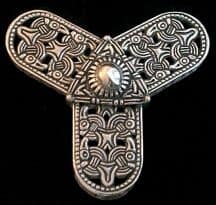 The Borre style is characterized by animal motifs and patterns of knots and geometric interlacing that leave little to no room for the background. The Borre style also has a ring braid, consisting of interlaced circles intermittently interrupted by the relief of an animal head.

Mammen style is named for the mound burial site at Mammen, Jutland in Denmark. The artifact taken from the site is an iron axe that is inlaid on both sides with silver designs of a large bird on one side and a leaf design on the other… It was likely a ceremonial weapon for events, rather than for battle. The deceased is believed to have been wealthy, as his burial clothes are trimmed in silk and elaborate embroidery.

The Ringerike style comes for a district of Oslo. It is characterized by its use of animal motifs, such as lions, and birds. Botanical elements and somewhat Celtic art elements also appear that are reminiscent of La Tene. Red sandstone is prevalent there and Vikings made much use of it as a carving medium. The Ringerike style is apparent in the Vang Stone, an upright grey stone highly decorated with the red sandstone as a medium in an ornate tendril-like design. At the top of this design is an animal. There is a runic memorial script on one edge. 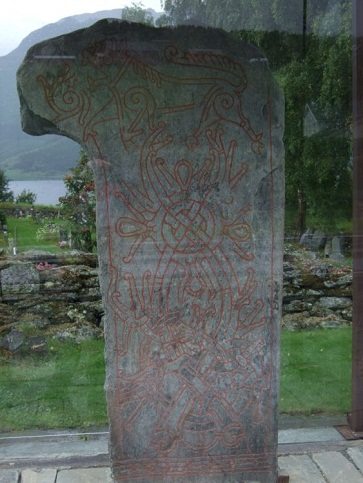 The Ringerike style is also apparent in another medium altogether – copper gilt weather vanes that are designed with intricate openwork and topped with an animal. Other minor styles exist and most are concerned with animal themes decorated with interlacing or botanical elements.
The mutual influence the Vikings imparted on the world, and that they brought back home, are highly evident in their artwork, yet their art remains quite unique. In addition to the items mentioned, the breadth of their art expands to armor, drinking vessels, and portable religious paraphernalia. All things that would be important to a seafaring culture.