An Art-Lover’s Guide to Florence: The Heart of Renaissance Creativity

Florence is beautiful. Few time periods create the image of a magical artistic utopia like the Renaissance.

Taking place from the 14th to the 17th centuries, the Renaissance was a period of humanity emerging from the Middle Ages and giving rise to early modernity.

The Renaissance saw forward leaps in the realms of politics, education, infrastructure, architecture, and most other vital aspects of society, but perhaps the most defining characteristic of the period was the outpouring of creativity in the realm of art.

Though the exact time and place that the Renaissance started is the subject of some debate, the early years of the movement are most strongly tied to Italy and it is generally agreed that it was born in Florence, as were both of the archetypical “Renaissance Men,” Leonardo da Vinci and Michelangelo.

Though Italy has changed much dramatically in the intervening centuries, having survived a bloody unification and two world wars, the remnants of the art created by the masters still exist alongside a modern culture that carries with it the same spirit that nurtured the Renaissance in the first place.

My visit to Florence was dedicated to exploring these two co-existing aspects of Florentine culture—the legendary works from the past as well as the contemporary pieces created in their light. Probably you may not get the chance to see the biennale, as it happens during a specific period of the year, but you cant document a feature on Art-Lover’s Guide to Florence without it’s mention

My first stop and the impetus for my visit was the Florence Biennale. Held every two years within the walls of Florence’s most massive historical arena, the Fortezza de Basso, Florence Biennale is a self-funded showcase of contemporary art, a striking presence in its historical setting.

Being funded by the artists themselves, Florence Biennale removes many of the traditional barriers of patronage that restrict emerging media and has, as a result, become a safe haven for digital art. Paintings, sculptures, photographs, and all other forms of media were represented at their finest in this astonishingly eclectic gathering of international artists.

Leaving the festival, I found myself ready to explore the more historical aspects of the city. Though I knew I needed to visit museums to see much of Florence’s art, I couldn’t help but think of the city itself as an open-air museum.

The heart of Renaissance creativity, Florence’s architecture, including the Cathedral, its churches, and its many palaces, were created by many of the same minds who made the most famous artwork from the period. 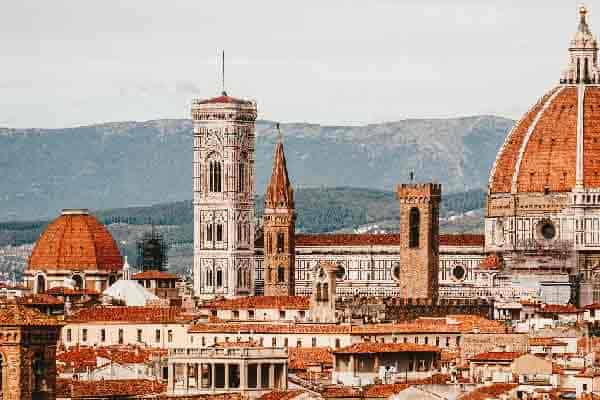 One can be overwhelmed by the beauty of Florence just by walking down its streets.

Though much of the Corridor is closed to the public, some have been converted to a gallery known as the Uffizi Gallery which welcomes visitors to appreciate its beautiful architecture as well as an impressive collection of art from the 17th and 18th centuries.

Even among these beautiful pieces, the story of Italy’s more spotted recent history is inescapable—the massive windows which present a stunning view of the Arno River were installed ahead of a visit from Adolph Hitler, and a section of the gallery is dedicated to a mafia bombing in the 1990s which damaged parts of the gallery and destroyed several works of art.

The Accademia Gallery, home to many of the most famous Renaissance works, is another place that a visitor must-see.

One of the most universally recognized sculptures, Michelangelo’s David, calls the Accademia Gallery home. 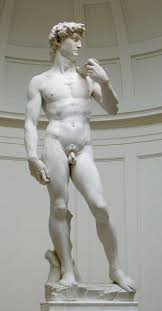 Originally placed outside Florence’s political center, the Palazzo della Signoria, the legendary sculpture has since been moved into the Gallery and replaced by a replica in its original spot.

The museum also features a handful of other works by Michelangelo, such as several unfinished statues including a Pietà, a traditional type of sculpture depicting the Virgin Mary holding the dead body of Christ. Other works in the museum include pieces by Botticelli, del Sarto, Uccello, and several other pieces from various points in the Renaissance.

Perhaps the most breathtaking of all the sights was the Florence Cathedral, a pinnacle of gothic architecture.

The peaks and intricate design of the Cathedral and the nearby Baptistery of St. John and Giotto’s Campanile are truly among the most excellent representations of pre- and early Renaissance structures.

“And when I thought of Florence, it was like a miracle city embalmed and like a corolla, because it was called the city of lilies and its cathedral, St. Mary of the Flowers.” -Marcel Proust, writer

Designated as a UNESCO World Heritage Site, an indicator of great cultural and historical significance, the Cathedral was first dreamt up in the late 11th century and is considered to have been finished by the 13th century. Its importance is compounded by its standing as a highly significant holy site, is dedicated to “Santa Maria del Fiore,” or Saint Mary of the Flowers, the mother of Jesus.

Its interior shows the interconnectedness of Renaissance innovation.

Not only is it an architectural marvel, but the preserved frescos and stained glass windows are among the most beautiful sights in the city. Largely an austere and awe-inspiringly hollow building, several works by Paolo Uccello, Andrea del Castagno, and others only boost the sacred air that fills the structure.

The artistry that is the dome on top of the Cathedral was engineered by Filippo Brunelleschi, whose burial site in the building can be viewed by the public, and stands next to Giotto’s Campanile, the other defining feature of the Cathedral’s magnificent silhouette.

In stark contrast to the permanence and historical weight of the many galleries and holy sites, I also took notice of the work of Clet Abraham, a famous street artist who has been active for over two decades. 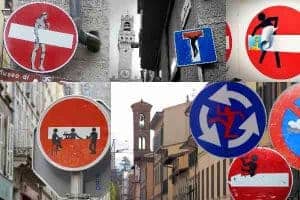 Clet specializes in modifying traffic signs and his work ranges from the playful, such as a man carrying away a bar on a no-entry sign, to the provocative, as with his depiction of Christ hanging on a dead-end sign.

The commonality is that his pieces are very ephemeral stickers meant to be removed at a moment’s notice, a stark contrast to the city’s vitally important artistic heritage.

Stealing away from the spotlight of the Cathedral and all the city’s galleries, I found one final gem in a tiny church near the Ponte Vecchio. Located above the altar in the comparatively tiny Capponi Chapel is The Deposition from the Cross, the surviving masterpiece of the lesser-known Renaissance painter Jacopo Pontormo. With his love of bright colors, elongated, twisted figures, and a dream-like imaginative quality uncommon among Renaissance artists, Pontormo is considered by some to be a predecessor to surrealist painters.

A short walking distance from the Uffizi Gallery, the Capponi Chapel is a wonderful sight away from the crowds of the better-known collections.

“This is the fairest picture on our planet, the most enchanting to look upon, the most satisfying to the eye and the spirit. To see the sun sink down, drowned on his pink and purple and golden floods, and overwhelm Florence with tides of color that make all the sharp lines dim and faint and turn the solid city to a city of dreams, is a sight to stir the coldest nature, and make a sympathetic one drunk with ecstasy.”

If you wish to explore the beauty of the Renaissance, there is perhaps no better way than to visit Florence.

Whether you’re admiring the works of Michelangelo at the Accademia Gallery or simply taking in the unparalleled architecture while strolling down the street, it is impossible not to be struck by the beauty of the city.

One would also be advised to consider the energetic art scene that still exists, inspired by constant exposure to the beauty of yore.

Florence is a captivating city from its art to the food, fashion, and design, and anyone with even a passing interest in the beauty of the arts would be well-advised to spend some time exploring its splendor.

END_OF_DOCUMENT_TOKEN_TO_BE_REPLACED

The Renaissance was a period in European history from the 14th to the 17th century. First, the movement started as a cultural movement ...

END_OF_DOCUMENT_TOKEN_TO_BE_REPLACED

Leonardo di ser Piero da Vinci widely known as Leonardo da Vinci was an Italian Renaissance polymath who was born on 15 April 1452 in A...