Giorgio Vasari was born in Florence in 1511, which allowed him a prime vantage point to see the unfurling of the Renaissance period. Sometimes known as the father of art history, Vasari was not interested in just spectating – he also involved himself in many facets of the art world of his day.

As such, he was a figure who helped shape the Renaissance in Italy and produced many wondrous and wonderful paintings during his career, as well as writings. Let’s have a look at 7 interesting and unknown facts about Giorgio Vasari, from his gossip to his craftsmanship.

1.An Artist, A Writer, and An Architect Too

Like many of the upper-class of the 16th century, Vasari had many different skillsets. He was a skilled writer and, on many occasions, he showcased painting ability too, but one of the most surprising facts is his work as an architect.

He is credited with constructing the loggia, an architectural structure come street, a place in Florence’s Palazzo Degli Uffizi where many people would queue for entry to a gallery.

He also completed much work on churches across Tuscany, remodeling several churches and constructing an octagonal dome in the Basilica of Pistoia. One of his paintings was commissioned by the Pope and displayed in the Basilica di Santa Croce.

As a young person, Vasari is known to have mingled with artists in many artist studios in Florence. Many of these fellow artists would become lifelong friends and acquaintances for him. Perhaps most notable of these artists was Michelangelo, who would be a friend and inspiration for each other for life.

Each would praise the other, and Michelangelo even produced a poem about Vasari’s talent, letters that still exist today.

As he developed in his skills and became more well known, the likes of Titian, Giorgione, and other Renaissance artists became his acquaintances and a part of his circle.

3.Composition of his Magnus Opus

In the year 1550, Vasari produced an encyclopedic work titled Le Vite de’ più eccellenti pittori, scultori, ed architettori. This stands for The Lives of the Most Eminent Painters, Sculptors, and Architects. In this collection were hundreds of biographies documenting the lives and careers of the most famous artists across Europe.

Although he completed much hard work on these, there are all kinds of errors, inaccurate descriptions and biases, including giving all credit for Renaissance works to the craftsmen of Florence, ignoring Venice entirely.

In these biographies, Vasari reveals interesting anecdotes and scandalous information for the times, including sexual misdemeanors, fears, and vexations – no topic was too scandalous for him.

4.An important moment in art history

In his production of The Lives, Vasari unknowingly produced the very first modern writing about the history of art. In this way, Vasari made the way for all future historians to come that the analysis and theory of art could be just as impressive, just as important, and just valuable as the creations themselves.

Through this book, we have the first known use of the word “Renaissance” as well as the very first writer to use the word “Gothic” in relation to art styles. Another introduction of his was the idea of competition in painting for economic benefit. 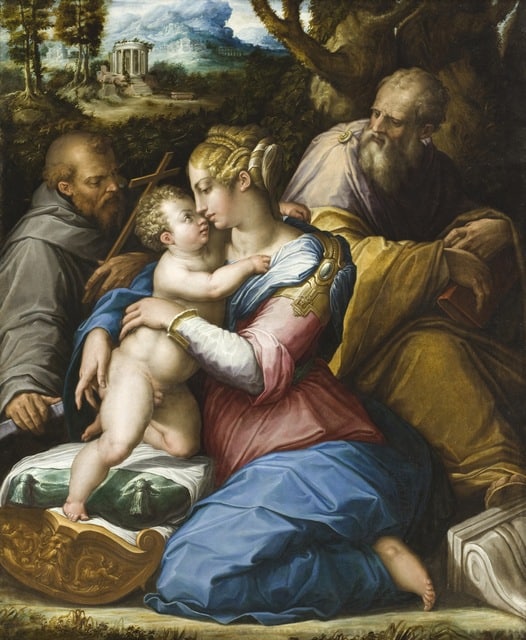 5.Wealthier Than His Famous Friends

As an employee of one of the most wealthy and important families, the Medici family, through the popularity of The Lives and by using his different talents in different spheres, Vasari certainly amassed a great economic fortune.

He built and decorated a large and impressive house himself and married the daughter of one of the richest families in the town. As he grew older and advanced further in his career, he was made a knight by the Pope, founded an art academy alongside Michelangelo, only serving to grow his prestige in the art world and his economic worth and hence comes interesting fact about

The Lives remains just as popular now as it did in the 16th century, and since it was first published has never once been out of print. As a tool for artists, those interested art and art historians alike, the earliest editions have sold for large sums of money.

For example, a 1568 edition sold for £20,000 pounds, a lot of money for a book. Some of his works have also been utilized by popular culture and writings, with one of Vasari’s famous fresco works appearing in the Dan Brown book “Inferno”.

7.A Collector of Art

Not only was Vasari a collector of life stories and biographies of many famous people, he is also known for being an avid art collector himself. Throughout his lifetime, he gathered a large collection of art, especially as a result of his many friendships and relationships with many famous artists and craftsmen of the Renaissance period.

The work of Giorgio Vasari throughout his lifetime is certainly impressive. From his amassing of great wealth to his art collections, to his writings, architecture, and paintings, he certainly had many skills at his disposal.

As people looking back at history, at unknown facts about Giorgio Vasari, we are almost certainly doing as the father of art history did – collecting facts and information about the life, career, and works of a famous and successful man so that we can immortalize his work and remember his achievements for all the years to come.  Also, check out 20 Most Famous Paintings by Raphael.