Pointillism art is a technique involving a stream of dotty dabs in strong, similar shades to create an entire picture. The detail and color selection used in this technique is astounding and requires a great eye and thorough knowledge of complementary colors. The artwork is often seamlessly put together when seen from a distance.

Previously in the Pointillism movement period, most of the art can be seen in the form of oil paintings whereas the modern era sees bolder, eccentric experiments being done with the pointillism technique. In this article, you’ll come across the 7 most mesmerizing Pointillism Artworks that will blow your mind!

Miguel Endara’s ‘Hero’ depicting a somewhat distressed expression of a man in a monochromatic background is a magnificent piece of art. Hailing from Florida, USA, Endara drew ‘Hero’ using a staggering 3.2 million dots, and that too with just one PEN – A Sakura Pigma Micron that’s used especially used for illustrations, fabric design, and sketches.

The art was completed in 210 hours total! Intricate details of the face including light stubble, wrinkles around the eyes and on the forehead, and composition of the nose make it an unbelievably surreal pointillism art. 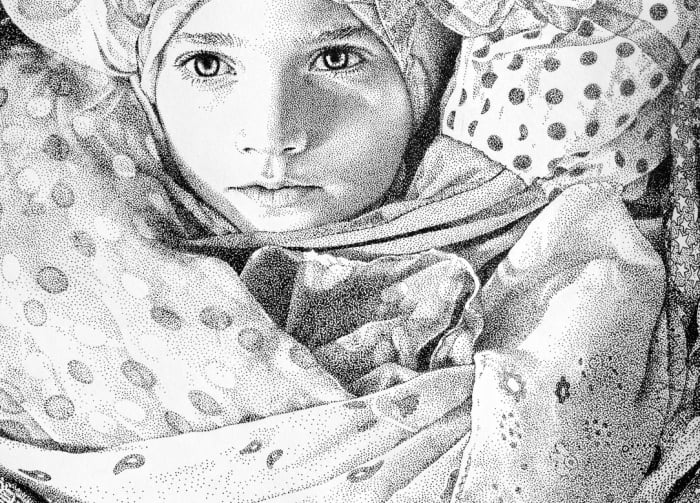 It is difficult to distinguish Pablo Jurado Ruiz’s ‘The Awakening’ from a real black and white photograph. The art depicts a child wrapped around covers with eyes wide open as if under the effect of a sudden, perhaps even a dark, realization. It comes in the list of inspirational Pointillism artworks.

Pablo’s pointillist pieces are drawn from his stories, hence why they appear almost alive.

‘Happy Youth’ by a German-Russian couple, Romer & Romer, is pointillism with utmost finesse. The dotty landscape displays a crowded scene at Brighton theme park with people in groups talking, enjoying rides, and having good fun and hence it comes under the list of Inspirational Pointillism Artworks

Though it looks like a pixelated piece of art, it is actually an oil painting. You can see incredible detailing that went into this painting and a particular shade of blue, almost aqua, used richly in the scene to create a realistic evening effect.

In this particular painting, the dots are finely blended so no blank spaces of white can be seen which makes the entire visual seem like it’s in motion. 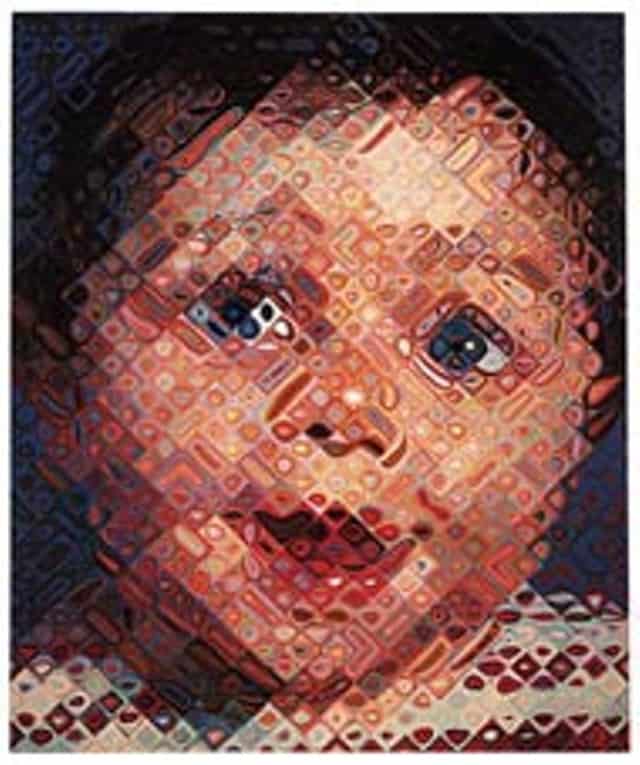 A fresh take on Pointillism, Chuck Close’s ‘Emma’ pulls the viewer into a strange, dreamlike state. Cut into tiny grids of multi-layered shades, Emma showcases a portrait of a happy child with sharp blue eyes grinning wide. Chuck is a renowned American artist whose method involves reconstructing a photograph on grids.

He created ‘Emma’ in collaboration with a Japanese artist, Yasu Shibata in over 18 months. A remarkable fact is that Chuck had to re-navigate how to paint after a spinal infection left him paralyzed in 1988.

Christian Faur’s crayon art ‘The wind, the wind’ is a smart piece of pointillist art. The artwork is hard to comprehend when viewed closely but upon stepping back, the viewers see a black and white image of a boy with a bow tie and a broken trail of colored crayon blocks overlaid on the visual and hence it comes in the list of inspirational Pointillism artworks

The contrast of vibrant pointy hues on a monochrome background is so unique, it’s almost identical to a scene in an old reel film. The imagery is meant to induce nostalgia for buying crayons for the first time when young. 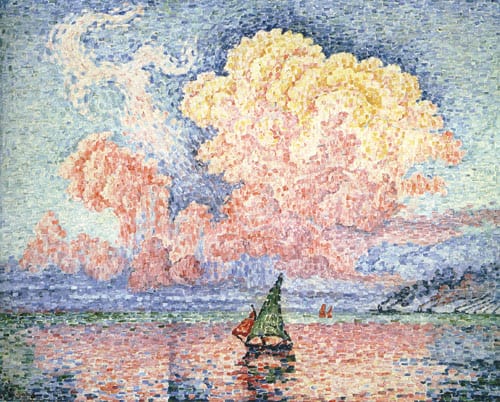 Paul Signac’s ‘Antibes, The Pink Cloud’ will always remain a timeless piece of Pointillism. The scene captures a boat on a calm body of water with yellow, orange, and red clouds beautifully reflecting in the water below. It is a perfect depiction of a serene sunset.

World-renowned painter and essentially a Pointillism genius, Paul Signac was one of the two masterminds behind the pointillism movement in the late 19th century, along with Georges Seurat. Painted in 1916, this stunning creation can now be seen in the Museum of Fine Arts in Boston, Massachusetts. 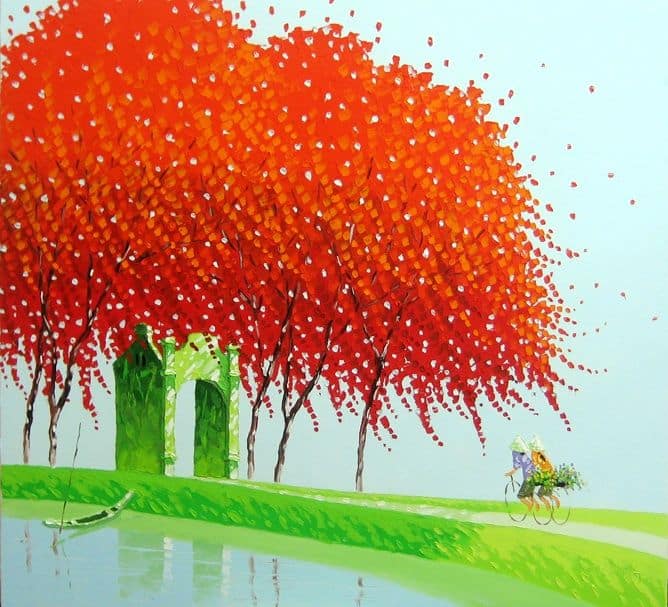 The visuals are fresh, vibrant, and exude a soothing effect on the eyes. Her use of purple and green shade variations is quite cleverly done; it almost instantly lifts the art.

These were some of the most captivating pieces of Pointillism art. From pen sketches to grids to oil paintings, numerous distinguished applications of the Pointillism technique can be seen in modern art today all across the world. Also, check out our post Why We Make Art?