Indeed, freedom or expression varies and comes in different forms.

While some regard it in the democratic manner of speaking up and being able to do things as you want, privilege should also be extended to other levels.

In consideration of the human rights of people, every country must provide the citizens and artists as well with the freedom they need.

The definition of freedom of expression

the power or right to express one’s opinions without censorship, restraint, or legal penalty.

The freedom in this instance includes but not limited to the freedom to express their hearts and thought, which is expressed by Deeyah Khan. Deeyah is a critically acclaimed composer, music producer, and film director with an Emmy award-winning documentary in her kitty.

Deeyah Khan submitted this assertion in her statement sent to the United Nations in March 2014.

Art has, over the years, served as a powerful medium of communication, and has the innate ability to go beyond the linguistic and cultural boundaries.

The assertion that art is a feasible medium of communication is not unconnected to the different forms it takes, such as intricate, basic, brash, or sublime – this is what it makes the freedom of expression concept a lot surreal

Van Jones presented a graph that accurately represents the interaction between the four aspects of society and its different members – which in fact is a great input towards the importance of expression in art. This is why art is important. 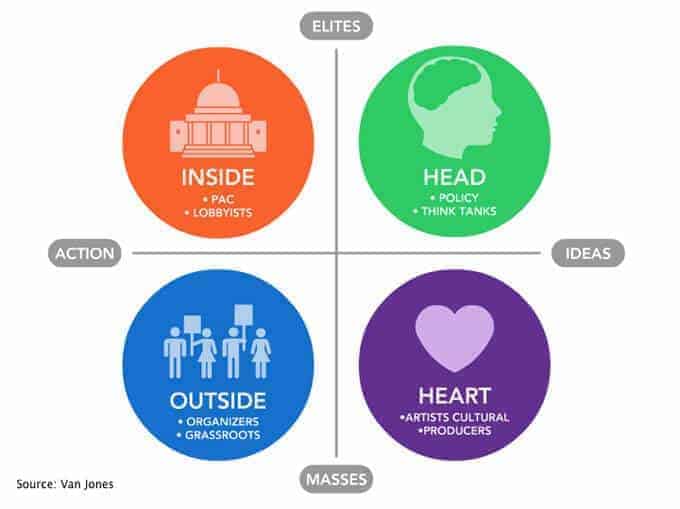 freedom of expression in art

All the components therein are part of the built-in creativities for transformation and innovation. Depending on how the artist goes about it, art can be used to paint different pictures. It can come off as an expression of hope or protest, just as it can be used to express resistance and rebellion.

Art can be used in many other ways, such as in starting conversations, pointing out newer inventions, and bringing more people into the knowledge of the things going on in the public sphere. It has been touted in many quarters that art has a way of making more impacts on people than has been made by political discourse and academics.

It is in that light that artists and many intellectuals within the niche are the primary targets of different suppressive regimes. Freedom of expression is censored.

The attacks are not unconnected to the belief that artists and intellectuals (including women) tend to expose the cruelty and corruption of fundamentalist groups – a move that eventually opens the can of worms and threatens the monopoly and obvious ineptitude of such groups.

Therefore, it is not surprising that art is regarded as transgressive in some quarters.

That also spurs the continuous moves to silence artists using different means, such as accusations of blasphemy, imprisonment, and harassment.

That is one of the reasons why Shelley, one of the radical English poets, opined that the future is in the present as the plant lies in the seed.

He also went on to posit that through art, it would be easier to realize a future that is united, diversified, and still equal for everybody.

It is on that note that artists of all kinds must be duly recognized as playing a vital role in the realization of creating a functioning and more civil society.

It is on record that artists from different places have, at different times, taken bold stands to bolster the recognition of human rights.

They also went on to stand up for the dignity of humans by pointing out the sufferings and oppressions of humans at different times. It is in the light of the unwavering spirit of artists that those in the business of suppression are continually in fear of the liberation of people courtesy of the works of art.

When the broader society is embroidered in fear and uncertainty, art comes in to become a voice for the voiceless.

In the moments when women are silenced, the artistic use of women’s self-expression becomes a challenging tool to kick against the limitations in gender roles.

Whichever way the inordinate actions in the society turns, one can be sure that art would always come in to lend a voice and lay a seed for the broader liberties of the people affected.

If you are wondering if art has a role to play in bringing positive changes in the society, you only need to look at the antagonisms to get the clearer picture.

With the constant attacks by militant religious extremists meted out to artists in many countries, it is evident that art is a force to reckon with.

Also, the victimization of artists in internal conflicts of geopolitical asymmetries adds more details to the daily assaults upon artistic freedoms all over the world.

Likewise, musicians who are in the habit of questioning corruption and repression in many countries have not had it easy either. They are continually oppressed – a move that is geared towards stamping out the hopes of the common citizens.

The United Nations (UN) took a bold stand to publish the first report that called for freedom of artistic expressions. The report, published by the UN Special Rapporteur,  also went on to direct governments to take actions against the incessant suppressions of artists, while calling for such violations to be recorded.

Although the conventional international reports have been devised to report only media freedom, other organizations, such as the National Coalition Against Censorship, Freemuse, and Arterial Network, have been able to document such violations.

Although famous artists have been at the receiving end of such attacks and censorships, the focus should also be extended to other areas, such as the up and coming artists.

It is with such widespread diversifications that the fights against the suppression of art would be tackled. Also, plans should be in place to make states and governments to be responsible for the protection of artistic freedoms and that of the artists.

On a final note, the freedom of expression and art are essential elements that should form part of the basis of any functioning democracy.

In consideration of the viability of human rights in any country, the focus should also be narrowed down to the freedom of expression given to artists to express their views.

Worthy of mention is that persecutions of artists should be regarded as political and not as acts of repression against dissidents. When such becomes the case, then we can be sure that art’s disposition as a tool for social change is still active.

Above all, it is in our collective interest as humans to strive for the freedom of expression for artists to speak out because it is by doing so that the irregularities in our societies can be pointed out and addressed in good time.

Tags:
definition, expressionism
Newer 20 Most Famous Sculptors of All Time
Back to list
Older 10 Most Famous Paintings by Rene Magritte