Famous Paintings of Keith Haring an American social activist and street artist is also one of the few contemporary artists that have pervaded the subconscious of the general public on a quite grand scale.

In his short life, Keith Haring was a prolific artist both on the street and in the studio, making him one of the true street art legends.

His colorful figures are instantly recognizable to many even if they don’t know him, much of the work by Keith Haring revolved around themes of politics, sexuality, war, religion, and AIDS, largely in response to the street culture prevailing at that time in New York City.

Inspired by crack academic and its effect on new york city. 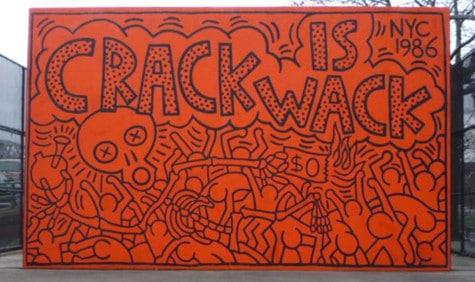 Crack Is Wack was made in the year 1986. This mural at 128th Street and 2nd Avenue was inspired by the crack epidemic and its effect on New York City. It was created to be a warning for crack users and was executed independently initially, without City permission but soon enough The mural was put under the protection and jurisdiction of the City Department of Parks and it still exists to spread awareness. 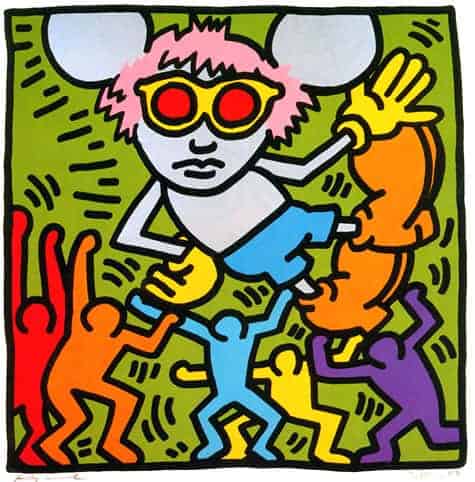 Andy Mouse was made in the year 1986 which is the fusion between Disney’s Mickey Mouse, a favorite character of Haring’s from his childhood, and Andy Warhol, Haring’s close friend and a leading Pop Art artist. It’s signed by both Keith haring and Andy Warhol which makes a bridge between generations. The cartoonish andy mouse and dollar bills depict the irony found in a money-driven capitalist society. 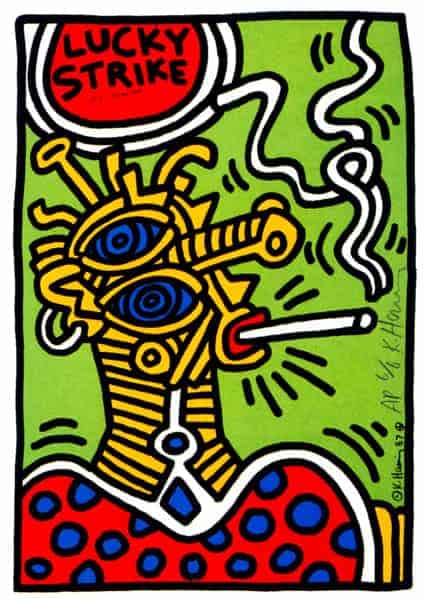 Lucky Strike was made in the year 1987. This painting is one of the Famous Paintings created by Keith Haring for the cigarette company lucky strike as an advertisement. Keith Haring’s work responded to the New York City street culture of the 1980s by expressing concepts of birth, death, sexuality, and war. Haring’s work was often heavily political and his imagery has become a widely recognized visual language of the 20th century.

A simple outline of a baby or a person crawling.

The radiant baby was made in the year 1990. It is considered as one of the most recognizable works and part of Famous Paintings by  Keith Haring by haring showing an outline of a baby or a person crawling on the floor on their hands and knees with lines emanating from them. Haring depicts threw the baby in this painting youthful innocence, purity, and goodness and hence forms a part of Keith Haring 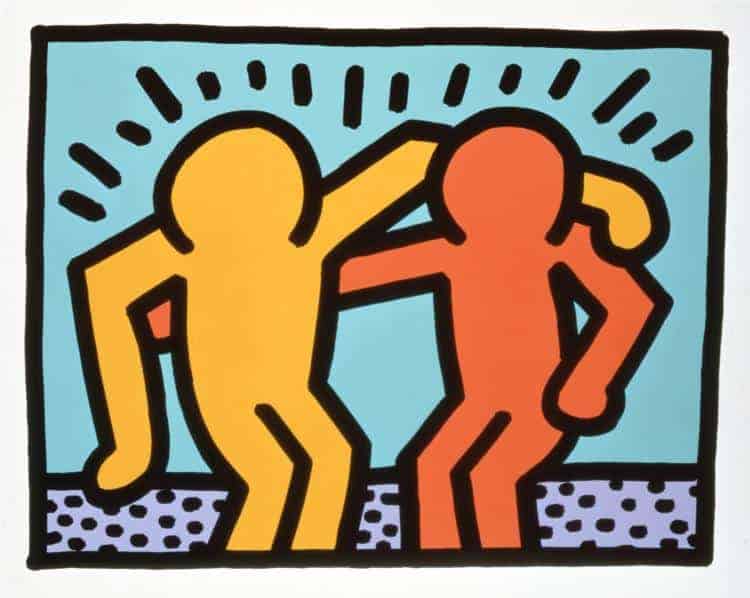 Best Buddies was made in the year 1990. This was one of his final print series before he dies of AIDS-related complications. This artwork depicts two figures hugging, with rays emanating from their embrace. Best Buddies is purposefully uncomplicated, inviting viewers to create their own interpretations of the scene. These figures appear as a symbol of universal love and acceptance.

The Marriage Of Heaven And Hell 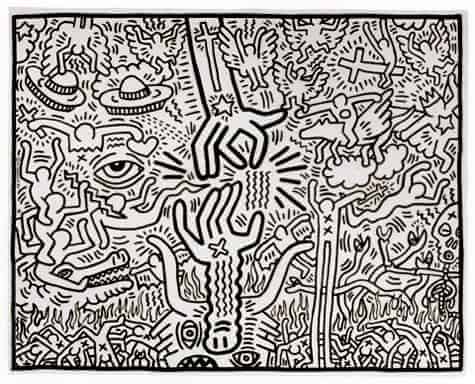 The marriage of heaven and hell was made in the year 1984. As the name says this abstract artwork depicts the marriage or we can say the connection between heaven and hell. Streetlife in New York City, drugs, nuclear weapons, AIDS no topic was off-limits to Haring who made social activism a central component of his artistic career.

Outline of a dog with an open mouth. 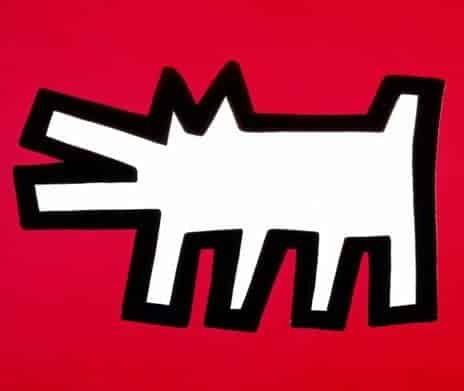 Barking Dog was born in the year 1990, featuring colorful canines with their mouths open mid-yap is one of the street artist’s most universally recognizable symbols and remains a testament to his dedication to accessible art. The dog’s cartoonish and simple shape shows Haring’s interest in Egyptian hieroglyphics to depict how humans communicate their experiences through universal shapes and signs. 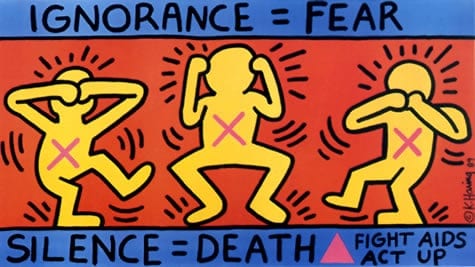 Ignorance = Fear was made in the year 1989. On behalf of the New York-based AIDS activist group, Haring designed and executed this poster which references the three wise monkeys that, see nothing, hear nothing, say nothing. The Artist refers 0 to the public’s ignorance with respect to Aids and calls for critical awareness of the ‘facts’. 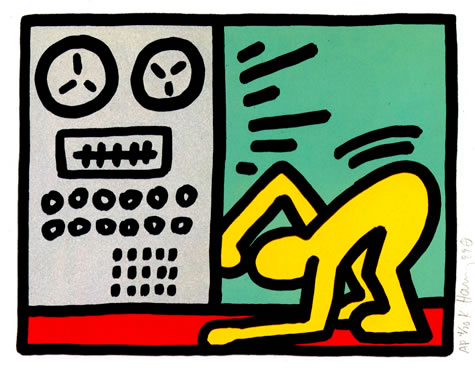 Pop Shop III was made in the year 1989. It’s a suite of four silkscreen prints on paper. With the typical use of primary colors, the figures were simplified, and easily recognizable as his. They formed glyphs that could be read, like an urban, tribal language. This Pop Shop series emerged as the shops Haring opened in New York and Tokyo and hence forms apart of Famous Paintings Keith Haring 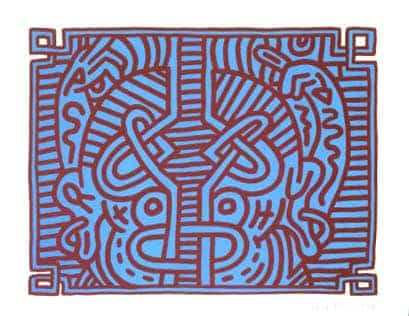 Chocolate Buddha 1 was made in the year 1989. Depicted in the artist’s graphic, linear style, Keith Haring’s Chocolate Buddha series consists of five prints rendered in contrasting colors such as red, blue, orange, and pink. Each print consists of a variety of figures creatures and objects. Though the density and maze-like design of the overall imagery filling out the canvas has a somewhat compulsive quality, in contrast to haring’s usual Zen-like simplicity, there is a flow and beauty to his use of energetic lines. 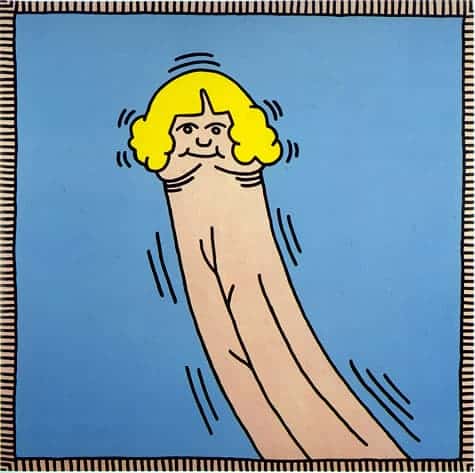 Debbie Dick was made in the year 1984. This was a promotional card with Motown recording artist Carrie McDowell. The promotion was for mentor contraceptives to promote safer sex. Safe sex helps avoid uncountable diseases that can be spread through physical intercourse, many healthcare professionals believe there really is no such thing as safe sex. They believe the only way to be truly safe is not to have sex because all forms of sexual contact carry some risk and hence forms a part of famous paintings by Keith Haring

A political response to the conditions of apartheid that still existed in South Africa. 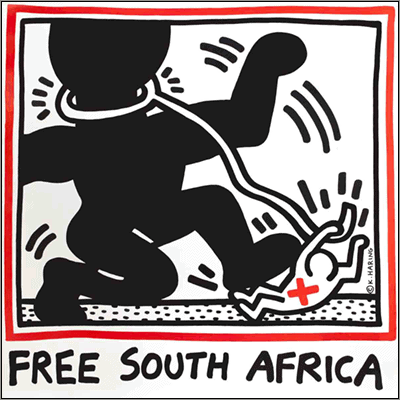 Free South Africa was made in the year 1985. This art was a response to the harsh conditions of South Africa due to political reasons. The black figure is intentionally much larger than the white figure to show that the black population is the larger was still being oppressed by the white community in the post-colonial area. Black lines representing the sense of dynamic movement and hence forms a part of the famous paintings by  Keith Haring

Rebel With Many Causes 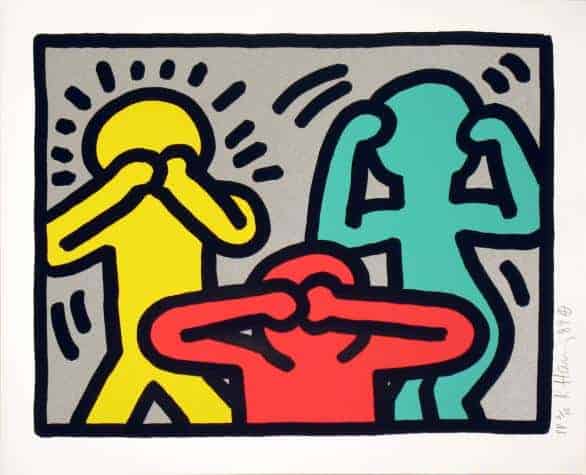 Rebel With Many Cause was made in the year 1989. This artwork is an example of the three monkeys speak no evil, see no evil, hear no evil from left to right, a criticism of those who would avoid social issues, especially the AIDS crisis. When the federal government was slow to act Haring devoted himself to raising awareness for AIDS.

Outside mural by Keith haring in new york city. 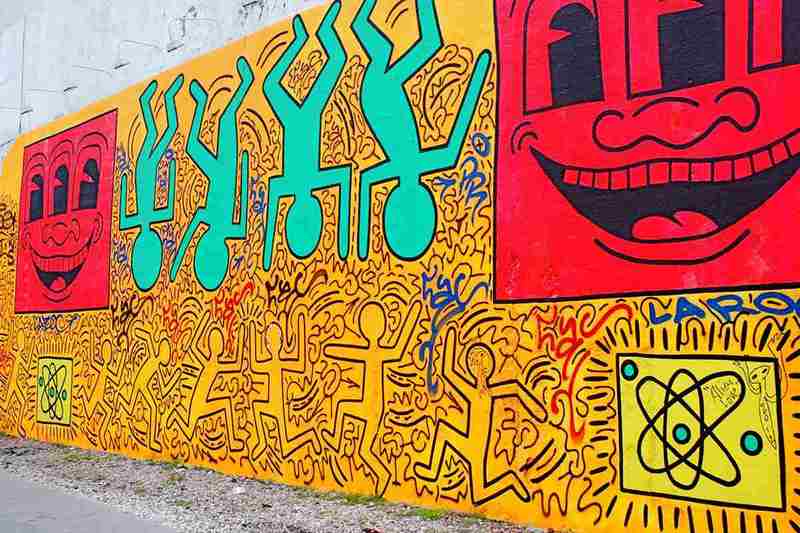 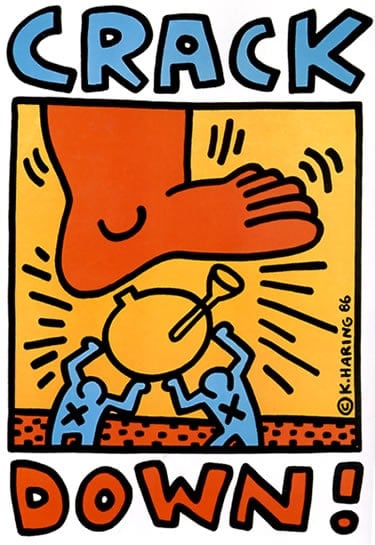 Crack Down was made in the year 1986. Keith famously declared that art is for everybody, he was drawn to posters because they were a democratic medium, a great way to share his bright designs and graphic characters with the public on a large scale. The concert Crackdown On Crack was organized by famed concert promoter and producer Bill Graham to raise funds to combat the crack-cocaine epidemic in New York. 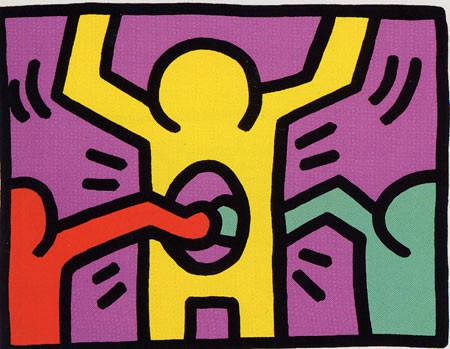 Pop Show I was made in the year 1987. Pop Shops were born out of the artist’s desire to make his whimsical aesthetic accessible to the widest audience possible. He wanted it to be a place where not only collectors but the children could also come, creating an immersive environment for visitors to browse and enjoy haring’s beloved art. 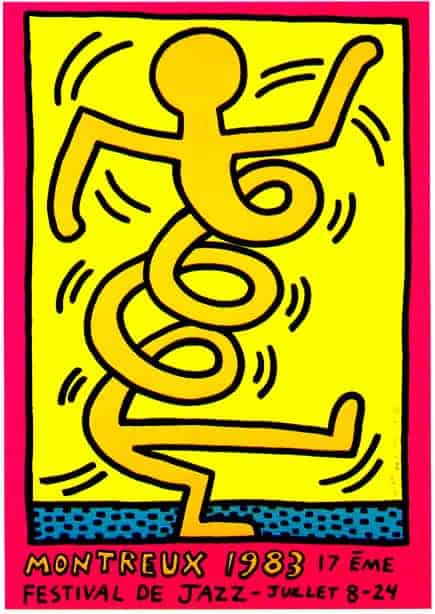 Montreux was made in the year 1983. Keith Haring was asked to create a poster for the iconic Montreux Jazz Festival, in turn, he submitted 3 designs which were instantly accepted. Haring visited Montreux for the event and spent the entire time painting and creating art around the streets of the area. Pictures truly don’t do the colors of the trilogy of posters justice, the lush, bright colors are almost neon, and have been maintained perfectly over the years.

A Pile of Crowns for Jean-Michel Basquiat 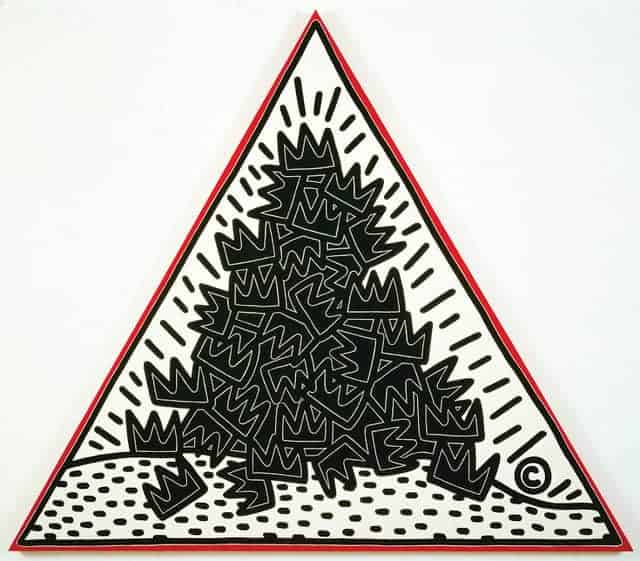 A Pile Of Crowns for Jean- Michel Basquiat was made in the year 1988. The artwork was made to memorialize his friend, artist Jean-Michel Basquiat. It depicts a towering pile of Basquiat’s trademark crowns. It was painted on a triangular canvas, like a warning sign, edged with a red outline. In the center is a pile of 3 pointed crowns which was Basquiat’s signature artistic motif. On the bottom right corner is a copyright symbol, which was one of Basquiat’s signature symbols. 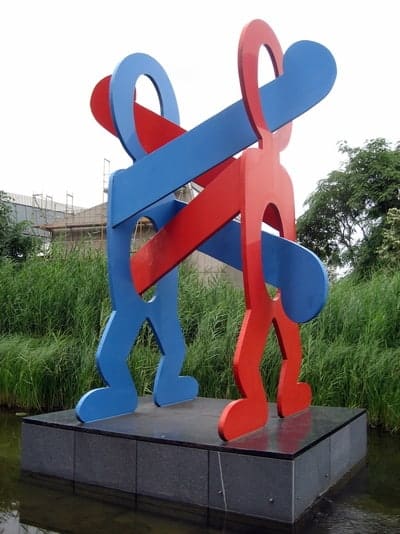 The Boxers was made in the year 1987. Boxers are one of the first group of sculptures that were created in Germany in 1987 and offers convincing proof that Haring is a master of the new medium. You can see two stick figures boxing and fighting each other which depicts the lines and abstract art that haring was involved in. 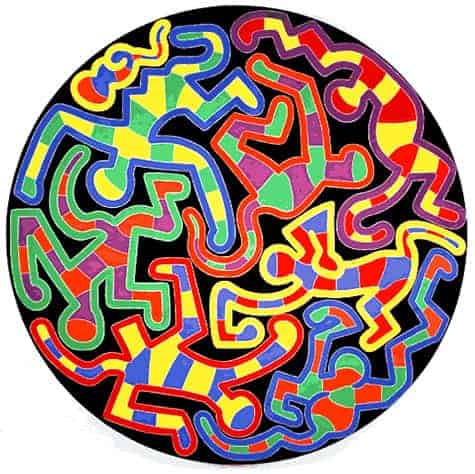 Monkey Puzzle was made in the year 1988. This giclée print delivers a vivid image with maximum color accuracy and exceptional resolution. The standard for museums and galleries around the world, giclée is a printing process where millions of ink droplets are “sprayed” onto high-quality paper. With the great degree of detail and smooth transitions of color gradients, giclée prints appear much more realistic than other reproduction prints.