Art is a way through which ideas and imaginations gain expression in the visual form, through media like sculpture and painting. Many times, art has been used as a medium of communication where the intent is to enable others to relate to certain realities of life.

Art has shown itself to be very useful when it comes to stirring deep conversations about societal issues and changes in the environment.

Art is a way of bringing imagination to life and communicating even our deepest fears.

Science, on the other hand, seeks to provide explanations, steadily getting more in-depth insights about certain phenomena and offering answers for the good of things in that regard.

So you see, art is an expression, and science is the explanation behind the expression. Art expresses what it sees; science explains it.

The question about what relationship exists between science and art has been in existence since time immemorial. 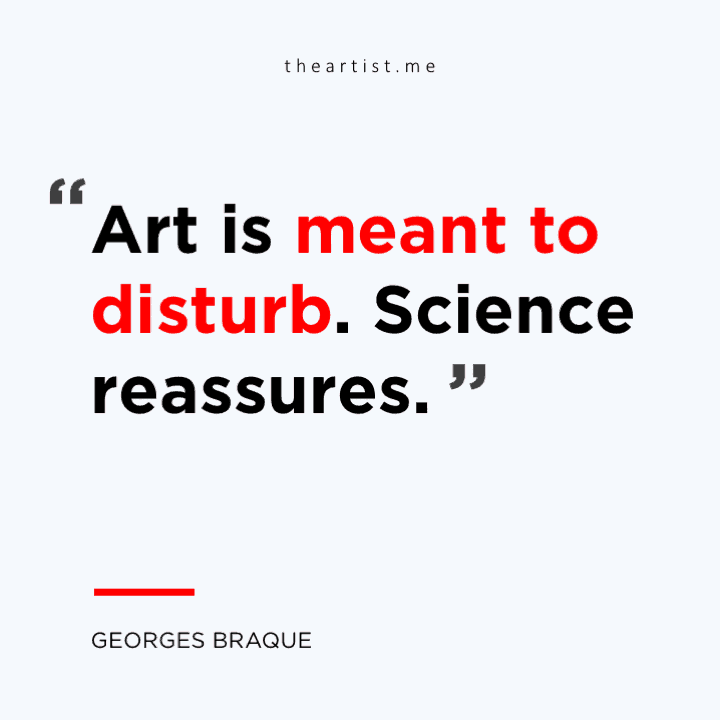 Both disciplines cannot be alienated from each other. They are both man’s attempt to explain and give expression to the world around him, yet being able to communicate his view to others around him.

The methods of expression or communication in science differ from those in art, not everyone is Science or Art inclined, so their audience is not the same. But, the ideas behind both fields remain the same.

It is like a man to seek explanations in a bid to understand the world around him. Often terrified by the fear of the unseen, it doesn’t matter how adventurous you are. Trying to figure out something, especially when it makes no sense, can be frustrating even for the most adventurous of us. Deep down, though he seldom says so, Man craves predictability and order beyond his adventures.

Despite the bitterness we’re faced within our world today, we still realize that we are stuck in this together. Every success and failure matters. Hence, the place of information cannot be overemphasized. We come up with better ways to pass vital information across.

Even when the data is trivial is some ways, it still goes round because, well, who doesn’t gossip?

Only on rare occasions would you find someone who would hoard new information rather than flaunt that they have a unique insight about something. Sharing opinions are allowed, we tend to view the world through each other’s eyes and experiences, and that is a significant basis for art and science as well.

To a large extent, art and science both require the ability to gain new insight and communicate or share it with others. An artist who finds it difficult to express his views about the world, might as we quit being one. And a scientist who can express himself but has nothing to say is a scientist at all.

Scientists face the aspect of gaining new insights, and artists take up the job of communicating.

Artists and scientists both put a lot of effort into being successful in their fields. Scientists dedicate a lot of time to repeating experiments over and over again while trying to discover new realities. Once this aim is achieved, there are methods through which they make communicating their new ideas more accessible. Sometimes, they hold gatherings and do questionnaires to pass the message across and get feedback about what works.

Technology, which evolves daily, is applied science. And when you try to decorate your space and make it look beautiful, that’s applied art.

Technology and aesthetics are vital parts of our existence, but they do not necessarily influence how we perceive the world around us. Science and art do the bulk of that work.

You must have heard at least once in college, that a kidney is bean-shaped. Isn’t that art in science? So you still think art and science are not related?

Architecture, which is a branch of science requires a blend of design and engineering to come up with mind-blowing structures.

The design part is the art involved, and engineering brings in the science idea. Music and Mathematics have been merged and delivered excellent results. Colors are employed in teaching kids science.

Every sector that intends to be still relevant shortly requires a great deal of curiosity and creativity, which is what art and science are about. Some scientific representations are best explained using pictures.

However, culturally, these disciplines are somewhat separated. You’ll most likely only hear of art galleries and science centers or museums. Art is found in galleries, while the museums and science centers are open to science enthusiasts. According to research, only a small number of museum visitors are between ages 15-25.

The question of how best to create interest in science in young adults at a time when they’re making career decisions and are most impressionable is therefore of great concern. The University of Melbourne, as a part of the science gallery international network, has taken up this quest to ignite curiosity in young adults between ages 15-25. The network provides a great deal of interest- igniting experience that might birth the next generation of art and science icons, by stepping in and gradually closing the boundaries between science and art. This is coming together of art and science triggers a deeper level of conversation with edgy ideas and experimental content.

The science gallery staged an exhibition tagged BLOOD: Attract and Repel, with a number of catchy sub-themes such as Stigma, health, Taboo, giving, and a few others. The ideas for the content of the exhibition were sourced via an open call for designers, few scientists, and a number of artists who were asked to submit proposals.

In the course of selecting the work for the exhibition, the scientists and artists pushed each other to go deeper, take risks, and consider the possibility of better perspectives. It brought to light the relationship between the two disciplines, pushed boundaries, and emphasized the importance of questioning.

The content of the exhibition was both thought-provoking and adventurous. There were a number of collaborations and pairings, and this enabled the artists and scientists to view their work from another perspective.

So, the next time you’re told that earth is spherical, do not wonder what forms have got to do with science, because of art equals science.

Tags:
aesthetic, definition, expressionism, science
Newer What is Culture?
Back to list
Older Mystery to Masterpiece – Why Is Mona Lisa Painting So Famous?