Paintings are often referred to as windows into another dimension, defined by the purpose for which they were created and the skill of their makers’ hand. The artists of Indian royal courts in Rajasthan and the Punjab hills accessed divinity through their craft, providing objects for the personal devotion technique known as Bhakti.

The paintings created between the sixteenth and nineteenth centuries in this area are characterized by their brilliant colors and vivid depictions of Hindu epic narratives, as well as magisterial courtly life. They illustrated gods and demons in spiritual battle, fantastical creatures of mysterious origin and great power. Using symbols that are central to Indian literature and worship, these craftsmen celebrated the diverse stylistic choices of their unique tradition. 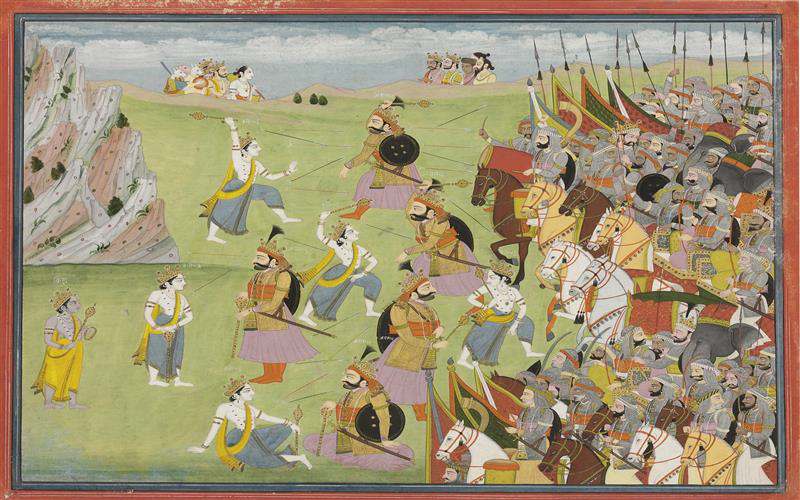 Largely born from India’s ancient texts, poems, and songs, these mystical stories of good and evil were kept alive in the artwork housed within temples and other places of worship.

The remarkable evolution of style and treatment of materials can be seen in the medieval Hindu sculpture of cave reliefs and frescoes, which led to the handheld court paintings that occupied a space somewhere in between image and icon.

Careful details like a burnished gold leaf and crisp line quality were used to illuminate the mythological beginnings of these meaningful narratives, emphasizing their spiritual importance with a painstakingly intentional process.

Like many of the artifacts that survive in present-day India, the tradition of making these court paintings originates in the leadership of Mughal emperor Akbar. A man of compelling historical importance, he reigned from 1556-1605 and commissioned a staggering number of artworks that help us to understand the culture of an empire that he worked tirelessly to establish. 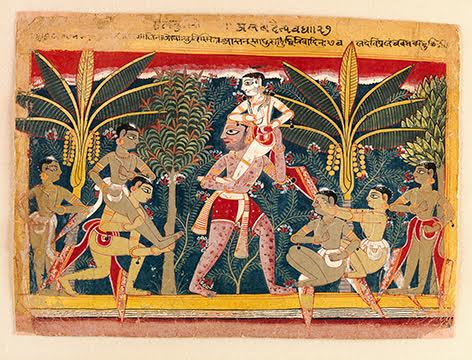 The crumbling of the Mughal Empire in 1858 resulted in a period of unfortunate decline for the practice of Rajput court painting. However, in the glow of its cultural relevance, these works were highly respected for their intimate nature and poignant subject matter.

The private experience of holding a small tablet in one’s hands suggested that the image was made for that individual alone, providing a confidential opportunity to interact with who or what the painting depicted. They were meant to examine at close range, one at a time, like the pages of some mystical book holding the answers to spiritual enlightenment. 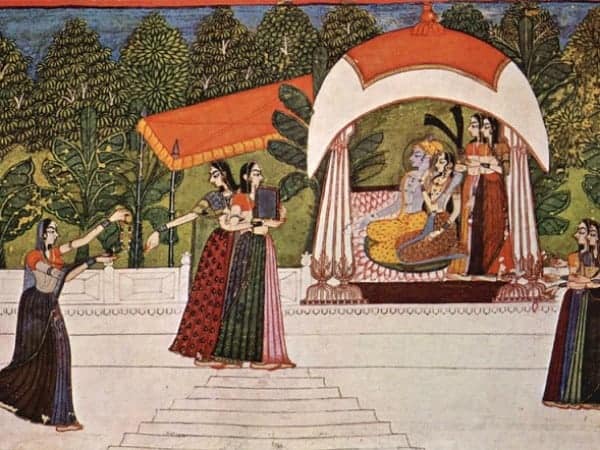 The images were painted with a kind of opaque watercolor, made up of vegetable and mineral pigments, delicately applied to several laminations of thin paper. The color was added with a small, soft brush over a carefully rendered sketch and a thin layer of ground. A whole series was then framed with similar materials so as to suggest a continuous narrative, which was inscribed on its border or attached flyleaf. The finishing touch was to burnish the frame with an agate or smooth stone, resulting in a smooth, polished edge that contained one scene of a longer story.

This method of production seems to have originated during the Mughal Empire, Indian Court Paintings and continued for centuries under various rulers after Akbar’s reign had ended. The stylistic amalgam that served as inspiration for Rajput court painting was developed slowly during the Mughal reign, beginning with one of Akbar’s first great projects in 1557. Throughout the following fifteen years, he commissioned the creation of 1,400 paintings illustrating the Hamzanama. This ancient and well-known Persian romance told the story of Hamza in fourteen separate volumes and helped the artists to hone their skills over the course of its completion.

A Gracious Mix of Talent and Skill

Two of the most exquisite panels that are typical of the series as a whole is titled, “Assad Ibn Kariba Launches a Night Attack on the Camp of Malik Iraj” and “Umar Walks Around the Fulad Castle, Meets a Foot Soldier, and Kicks Him to the Ground”. 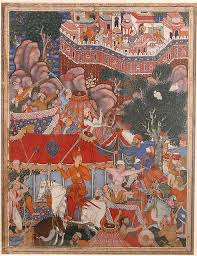 The composition of both scenes, like most early Mughal paintings, are busy with the flattened silhouettes and patterned surfaces of Persian influence. Building upon these previous techniques, the Indian artists shaded many figures and objects, giving them a physicality that was not present before. Developments were also made upon the Hindu tradition of incorporating bright reds and yellows, as well as the heavy-limbed depiction of female characters.

Passionate Humanity is one core theme of many works

The final paintings of the Hamzanama show the further complexity of artistic technique in their utilization of facial expression, dynamic positioning of the body, and the suggestion of space in deep vistas surrounding living, breathing people. These later works are imbued with an emotional power and dynamism that emphasize the artists’ departure from a Persian style that was now stale and static in comparison.

Upon studying images such as “Umar Walks Around the Fulad Castle”, it is apparent that Akbar’s army of painters had learned to empathize with their subjects, projecting their own human feelings onto the faces of those they depicted. 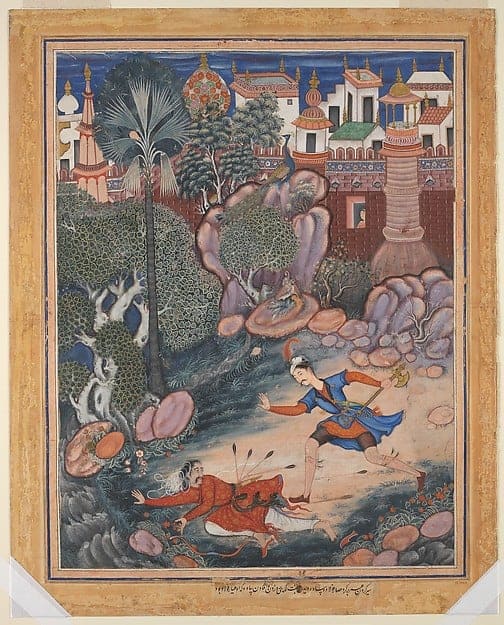 Umar Walks Around the Fulad Castle

Akbar’s encouragement of direct emotional expression initiated what is now arguably the most distinctive characteristic of Indian court painting as a tradition. While it is rarely discussed, this quality is present in the vast majority of miniature paintings, whether they were made by the courts or not.

A prime example of this mature Akbari style of painting is the Metropolitan Museum’s “Hamid Bhakra is Punished by Akbar”, created in 1597. As a single chapter in the official history of his reign, the emperor is depicted riding a horse during the final moments of an imperial hunt that had taken place more than thirty years earlier. 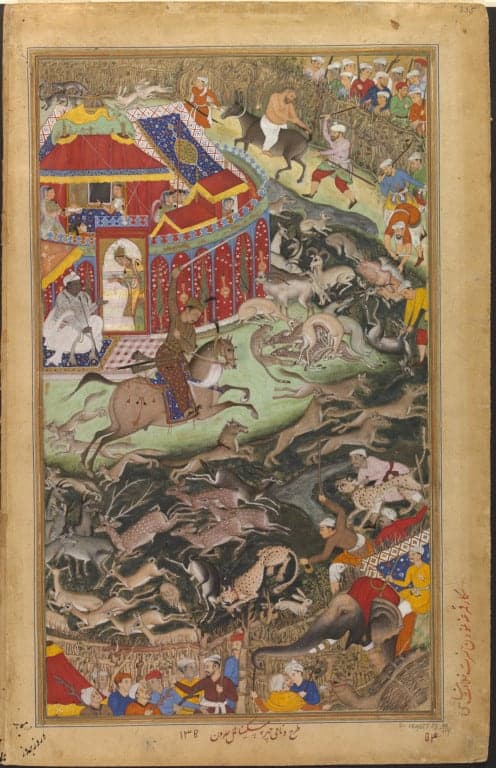 In the foreground of the picture, Hamid’s face is full of shame as he sits backward astride a donkey, his head shaven in penance.

Suffused with the powerful imagery of its mythological past, Indian painting expressed a new way of seeking the divine through personal devotion, or Bhakti.

The combination of painstaking technique and burning passion helped the emperor’s artists to grow in skill as well as purpose, providing their leaders with a more intimate method of spiritual practice.

Art has a habit of growing with necessity, and it was through this need for contact with a higher power that the Indian people were able to access their emotions on a more personal level than ever before. The passionate dedication to the origins of their culture is immortalized in the masterpieces that began with the reign of Akbar Mughal and will last for centuries to come.

Tags:
hindu mythology, indian, rajput paintings, woman
Newer 10 Paintings Around the Theme of Spirituality in Art
Back to list
Older 7 Most Visited Design Installations From Around the World

END_OF_DOCUMENT_TOKEN_TO_BE_REPLACED

Venus de Milo is the second-most popular woman in Paris’ Louvre museum. Beautiful woman, bare from the waist up, draperies cling to her...