This Artist Who Painted On Rocks Will Truly Inspire You

Jean Verame is one of the most lucid examples of how a man can turn entire hills and lifeless rocks into his canvas.

He’s the creator of unprecedented works within the land art movement; he paints directly on desert rock. His big projects take several months to complete and require years of meticulous preparation. The works of this man are highly recognizable.

This Belgian-born French sculptor began to paint stone in 1975 in the Cevennes Mountains. Since then he has done a series of open-air-workshops. Each of his projects has been a masterpiece and (almost always) better than the last.

Have you heard of concepts such as land art, earth art or environmental art?

Jean belongs to artists who are proponents of this style – earth art – have decided that using a traditional canvas is too mainstream, so instead they pick natural landscapes as a canvas.

Taking nature as canvas, these artists play with volume, mass and space to create monumental artworks. They use grandiose elements of nature served both as a canvas and setting for artists in search of the exceptional. 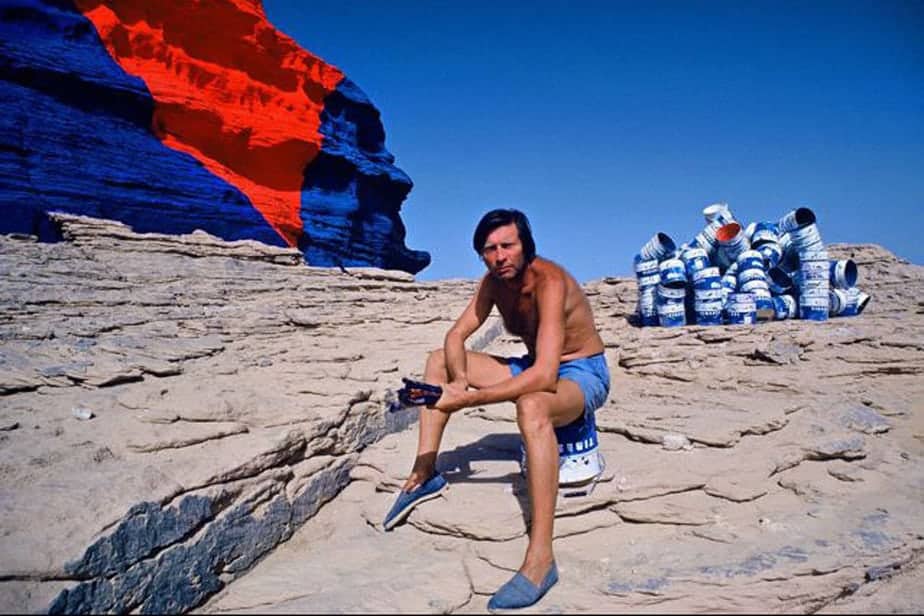 Every project of this kind is a grand endeavour and requires a lot of time and money to prepare. Oftentimes materials have to be transported to remote locations where the artist can create his vision for the place.Lots of painting materials, tools, scaffolding, and more are needed in order to complete a project of this proportion, not to mention all the food and supply required for the survival of the camps. Indeed, in most cases the locations are so remote that camps are required to sustain the artist and his supporting crew.

This is never easy, which makes it all  more impressive.

[quote_colored name=”” icon_quote=”no”]The artist says, “I set out to accomplish my purpose in becoming an artist; to express myself; liberate myself, to create and invent without concerning myself with rules, schools, laws, genres, precedents, permits and the empty striving for honours.”[/quote_colored]

In 1987, he travelled to the Tibesti desert in the north-east of Chad and spent several weeks searching for a site which sent out the right “flows, waves, call it positive, sensual vibes”. He found the perfect location a circular area almost 2 kilometres in diameter and surrounded by rocks, at an altitude of 1,200 meters. Then he set about making his preparations.

This was an undertaking of colossal proportions and took almost two years to prepare: after obtaining the official permits required for the legal completion of this project, he had to arrange the transport of all painting materials he needed to the site. We’re talking about 1500 canisters of paint, custom-made especially for this project, paint sprays, compressors, scaffolding, tools, supporting equipment, and more. This was just the beginning, though.  There was also a camp to be made for the survival of the entire crew for the length of the project. Tents, food, water, and petrol, all of this in a several-month supply, transported in the desert. 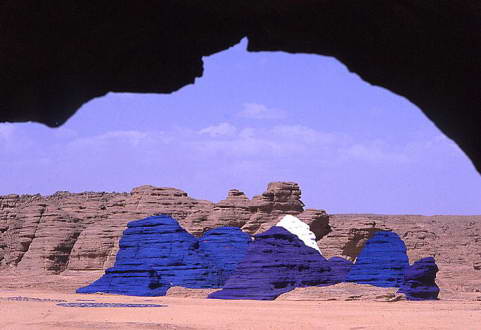 They also had to adapt to the living conditions, themselves. As you probably know, the temperatures during the day are very high, but they can drop below zero during the night. All of these challenges have to be carefully considered and proper planning has to be made in order to execute the project without any problems (or more like with as few problems as possible).

Jean worked there from March to June 1989. Using spray pistols, he painted large patches of blue, red, black, violet, and white on rocks, some of which were 30 meters high.

This incredible work of art has to be seen and cannot simply be described. Imagine walking through the lifeless, barren desert. There is nothing around – the whole landscape is monotonous and empty, and all of a sudden you see something you never expected to see. Some of the rocks bear different colours. There’s blue, and red, and violet, and black.

You start to think that you’re hallucinating, and this is exactly what it seems to be happening. But you’re not hallucinating. This is reality. And it’s beautiful. The contrast is so vivid that you can’t stop staring at it.

Jean nearly died of dehydration during this gruelling adventure in the Tibesti desert. This does not stop him from completing his work and signing it, as his custom, by writing his legacy in the sand. This speaks volumes of the strength of character of this great man.

END_OF_DOCUMENT_TOKEN_TO_BE_REPLACED

15 Most Famous Paintings by Claude Monet

This article contains Claude Monet's most 15 famous paintings. Claude Monet was a founder of French Impressionist painting. His paintin...

END_OF_DOCUMENT_TOKEN_TO_BE_REPLACED

Marble Trace by Reynier LLanes Narrates the Essence of Life, Harmony and Gratitude

The essence of all beautiful art, all great art, is gratitude. Humans are creatures of habit and routine. We often miss seeing the a...