When we say “surrealism”, what’s the first name that pops into your mind?

It’s probably Salvador Dali. He’s so prominent; his name has become synonymous with the movement. If you’re not thinking of Dali, the name of Rene Magritte probably comes to mind. Despite the fact that surrealism is most often associated with these titans, there are actually some pretty talented female artists that manage to stand out in the male-dominated world movement

Frida Kahlo (1907-1954) has often been classified as a surrealist, though she herself argue that she draws more “her reality, that her dreams”. A brilliant painter, she is most famous for her-portraits in which she paints herself in a surrealistic manner. Like many other artists, she was appreciated after her death and gained more popularity in the 80s.

The Suicide of Dorothy Hale was painted by Frida Kahlo in 1938. It’s exceptionally powerful, despite the fact that there are few elements that appear on the canvas. The painting depicts the suicide of the aspiring American actress Dorothy Hale. The building she jumped from is shrouded in clouds and so is the falling woman, possibly symbolizing the heights she had reached and her fall from there (in a metaphorical, not just literal sense). At the bottom, we see the actress’ lifeless body, allowing reality to set in. The painting combines the literal and metaphorical, the real and the surreal, showing every step of Hale’s suicide. Frida Kahlo did a marvellous job, though it wasn’t exactly the job she was commissioned to do. 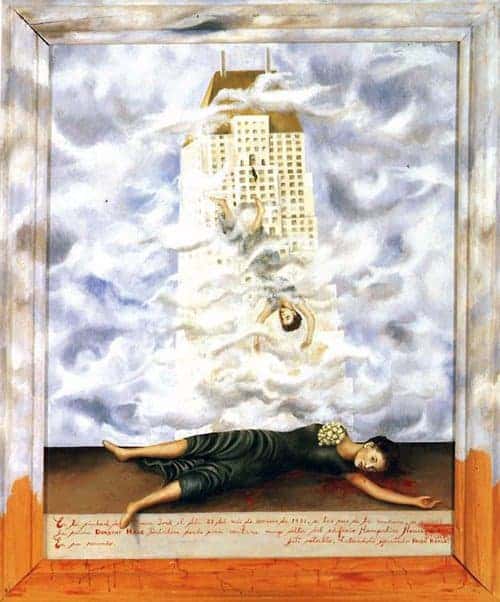 The Suicide of Dorothy Hale

This work of art brought lots of controversy, but it’s still one of the most influential and powerful paintings you can see. The symbolism, the fall, the feeling of hopeless, and the end of this young woman all speak volumes of the skills Frida Kahlo possessed.

Aside from The Suicide of Dorothy Hale, some of her other famous works include Congress of People of Peace, Flower of Life, and Girl with Death Mask.

Hiroko Sakai is one of the modern representatives of the movement. She was born in Japan but has lived in the US since 1999. Her art is filled with passion and has induced intense feelings in viewers over the years. She is a proponent of the idea that imagination is a powerful tool and always allows hers to run wild in order to produce great works of art.

Dorothea Tanning (1910-2012) is an American artist who brought her nightmares to life.

Laurie Lipton has quite a unique style. All her works are very detailed and one might say that in her art, surrealism meets photorealism.

The way she achieves this meticulous detail is by building up the tone with thousands of fine cross-hatching lines. She refers to her style as insane, yet she considers that the resulting detail and brilliance is worth all the effort, despite the fact that her drawings require a lot more time than a painting of equal size and detail would.

Carrie Ann Baade is definitely an interesting surrealist. She’s an American painter whose work is highly influenced by spiritualism, literature, and art history. Her paintings are rich and colourful, always carrying a powerful emotional message. Some of her top works include Through the Parallax, Tales of Passion and Woe, Intemperance, and The Secret Lives of Portraits.

Shahla Rosa is one of most respected modern surrealist, appreciated by critics as one of the most intense and greatest female surrealist. 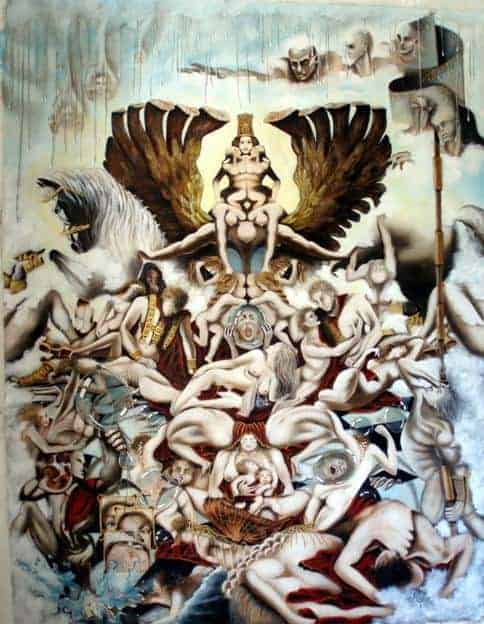 She herself claims, “Each time I started a new painting, it’s like emerging in surrealist art as a spectator at the birth of the movement. In my paintings each character is the being that projects the greatest shadow or the greatest light into my dreams, or is the love as a means of creation and a source of revelation.” Her paintings are always intense and rich in detail.

Leonor Fini is often considered one of the most influential women artists of the mid-twentieth century. One of the main themes of Fini’s art is the complicated relationship between the sexes, primarily the interaction between the dominant female and the dominated male. She was always surrounded by controversy because of her art.

Like other artists we’ve had a look at so far, Méret Oppenheim (1913-1985) was always surrounded by debates because of the theme of her art. 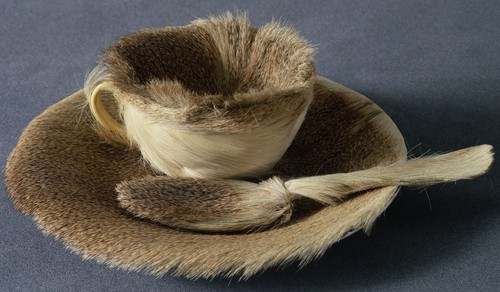 Breakfast in Fur by Méret Oppenheim

Her theme, whether we’re talking about her paintings or photographs, was female sexuality and the exploitation of women by men. She managed to deliver interesting and original, yet clear messages by using everyday objects in her art. Some of her top works include Breakfast in Fur, My Nurse, and Giacometti’s Ear.

Kay Sage (June 25, 1898 – January 8, 1963) offers some of the most interesting pieces of surreal art you can find. Her paintings often speak of loneliness and discontent with society and the way the world is moving. The exclusion of human figures from her art, as well as the subdued colours speaks volumes about her isolation. Some of her top works include My Room Has Two Doors, On the Contrary, Unusual Thursday.

Finally, we have Sylvia Fein, whose work is a bit more subtle, but just as interesting as the rest of the women we’ve had a look at. Her style is not pure surrealism, yet she manages to deliver the surreal elements in her art quite well. Some of her most famous works include The Lady with White Knight and The Lady in the Cage.

Actually, imagination is the most important aspect of surreal art. If you’re thinking about entering this field, you need to learn to let go of your rational thoughts and simply let your imagination run wild, where great art comes from.

All these women have managed to establish themselves and distinguish themselves in a predominantly male field. Their talent is undeniable, and the power of their imagination – obvious from the first glance.

Tags:
memory, woman
Newer UAE’s Love For Art – A Live Canvas of Music, Poetry, Theatre and Films
Back to list
Older The Power of Pop Art

END_OF_DOCUMENT_TOKEN_TO_BE_REPLACED

Paintings are often referred to as windows into another dimension, defined by the purpose for which they were created and the skill of ...

END_OF_DOCUMENT_TOKEN_TO_BE_REPLACED

Venus de Milo is the second-most popular woman in Paris’ Louvre museum. Beautiful woman, bare from the waist up, draperies cling to her...