Top Iconic Works from the Era of Impressionism

Impressionism started in France with a group of Paris-based artists and their independent exhibitions made it popular between 1870-1880.

Before this art movement came to being, most works of art were created in a studio. Impressionists changed the norm by breaking the rules and often painting outdoors, thereby taking note of realistic scenes of modern life.

Impressionism encountered a lot of criticism when it first started, though it later gathered a following and led to an analogous movement in music and literature known as impressionist media and impressionist literature.

In this post, we will be considering 10 famous paintings of this revolutionary art movement.

1.A Sunday Afternoon On The Island Of La Grande Jatte By Georges Seurat. 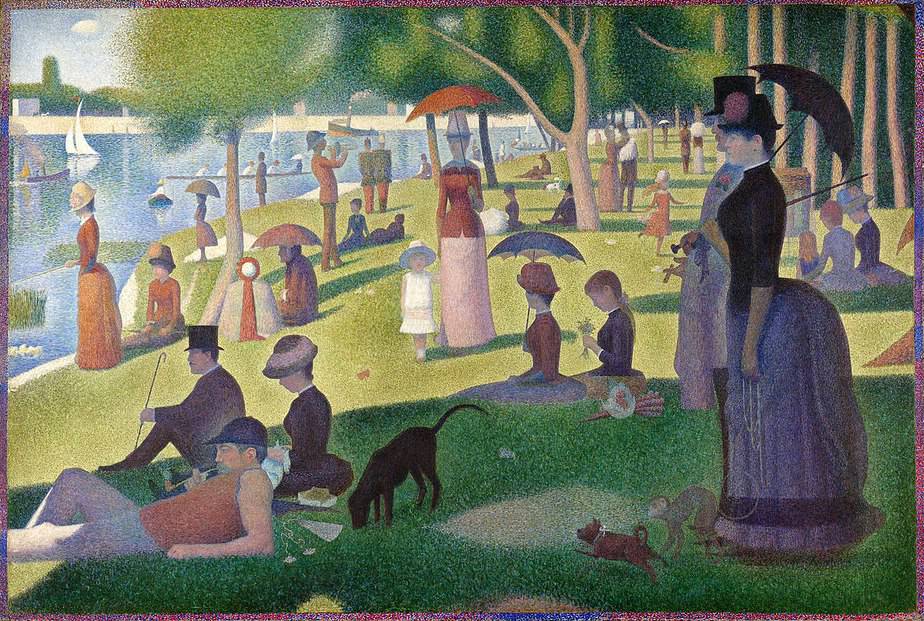 This work, painted in 1884 is George Seurat’s most famous work. It is composed of a number of Parisians at a park on the banks of river Seine. It is an oil painting as well as a pointillist painting and was inspired by the painter’s observation of the world around him.

It is a clear picture of a typical outing for Parisians at the time. Umbrellas and trees provided the required shade and while facing the river, the people appear to have found an escape from the city life regardless of the activity they’re engaged in.

This work of art which has found its permanent residence at the art institute of Chicago is arguably the most celebrated work of pointillism. 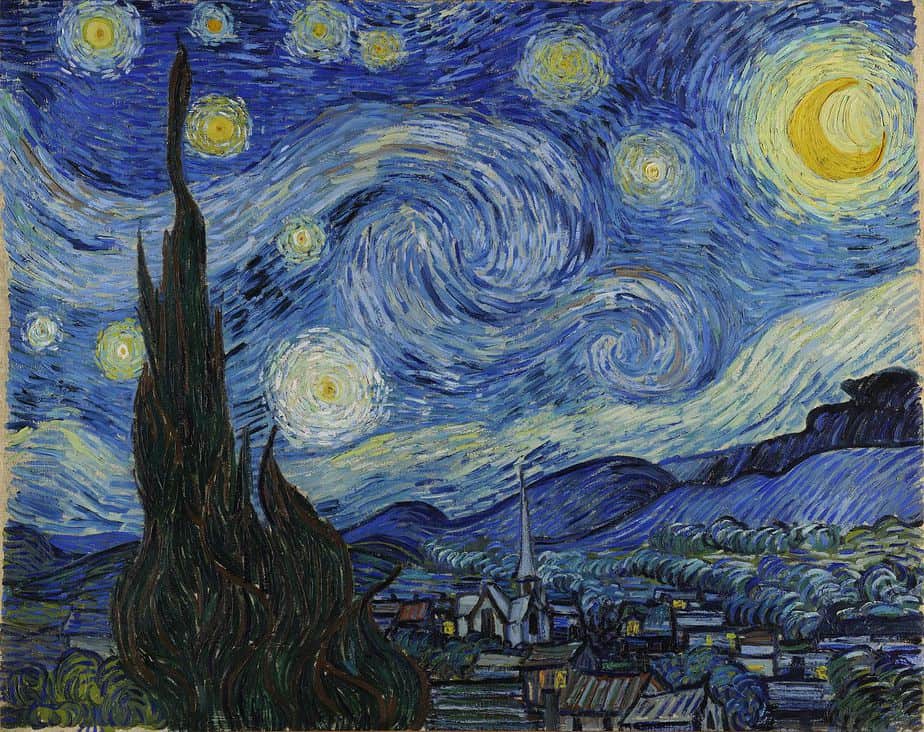 This artwork created by Vincent Van Gogh in June 1889 is an oil on canvas painting that fully describes the view of the artist from the east of his asylum room through the window at night.

It has its permanent residence at the Museum of modern art in New York. It is one of Van Gogh’s most celebrated works, it is surprising seeing that the artist regarded it as a failure. 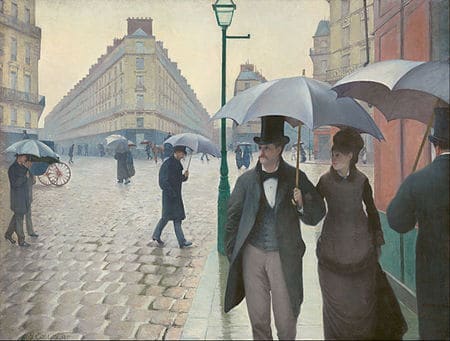 This one is a large oil painting created in 1877 by Gustave Caillebotte and has been considered to be his best-known work. It shows a number of people passing through the place de Dublin which was then known as the Carrefour de Moscou.

Caillebotte had many friends who had toured the path of impressionism and although this work is classified as an impressionist painting, it stands out due to its realism and dependence on line rather than broad brush strokes.

Observing this piece closely makes it clear that Gustave had an interest in photography, as the pictures in the foreground seem to be ‘out of focus’, and those in the mid-distance have relatively sharp edges while those in the background happen to be progressively distinct.

4. Luncheon Of The Boating Party By Pierre Auguste Renoir. 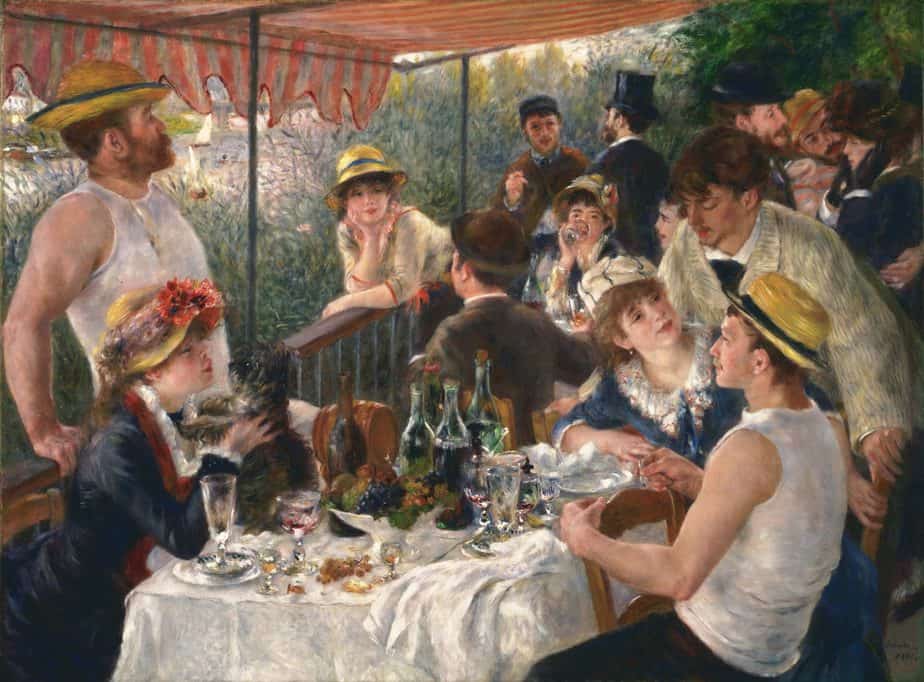 This is a painting by French impressionist Pierre Auguste Renoir. It was included in the seventh Impressionist exhibition in 1882 and was recognized as the best painting in the show.

The painting captured an atmosphere of merriment, where Renoir and friends shared food, wine, and small talk on a balcony overlooking the Seine at a restaurant in Chatou.

The painting gives a clear picture of how french society changed between the 18th and 19th centuries. It takes permanent resident in the Philips Collection in Washington after being purchased by Duncan Philips.

Worthy of note in this painting, are the richness of form, the fluidity of brush strokes, and a flickering light. 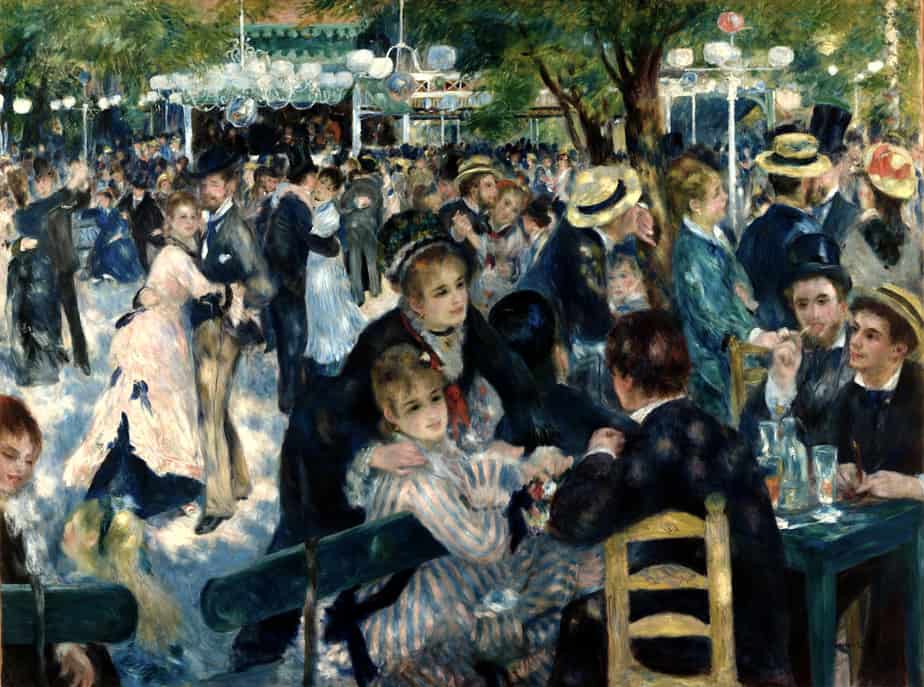 This painting is by the same artist and is a masterpiece of the Impressionism movement. It projects a typical Sunday afternoon at the true Moulin de la galette in Paris.

Then, in the late 19th century, working-class Parisians would get dressed, and spend time there eating galettes, while some danced and drank.

Like other Pierre Auguste Renoir works, this painting shows a richness of form, fluid brush strokes, and sun-dappled light.

6. A Bar At The Folies- Bergere By Edouard Manet. 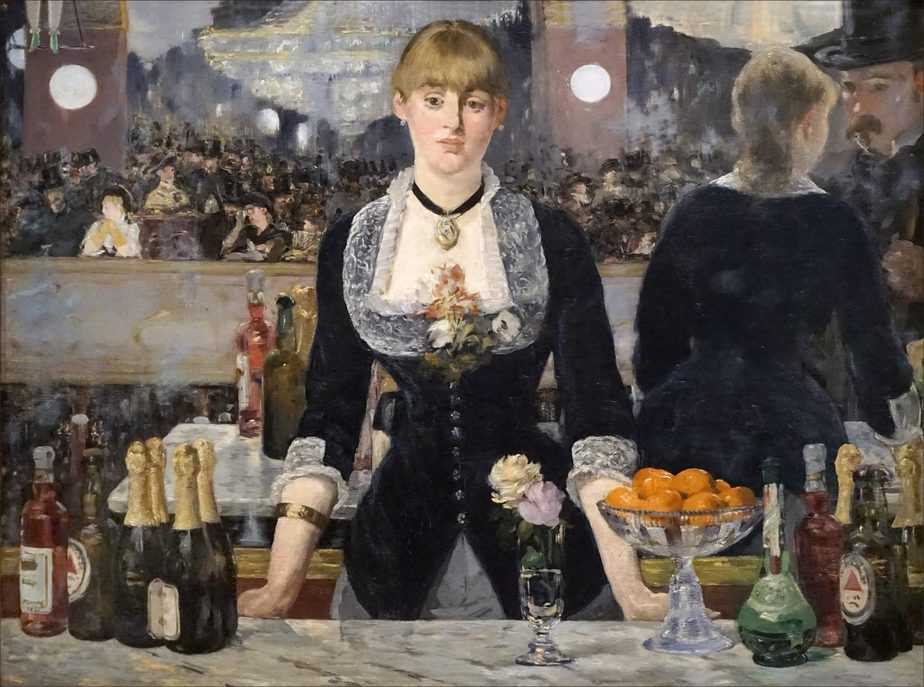 This painting is considered to be Edouard Manet’s last major work as it was created just a year before he died of syphilis at 51. Painted in 1882, and exhibited at the annual fine arts exhibition that same year.

It shows a scene in a nightclub called Folies- Bergere in Paris. The painting was originally a possession of Emmanuel Chabrier, a close friend of Manet but is now a resident at the Courtauld Gallery in London.

Manet made a number of preparatory sketches at the bar, but the final work was painted in his studio.

7. Woman With A Parasol: Madame Monet And Her Son By Claude Monet. 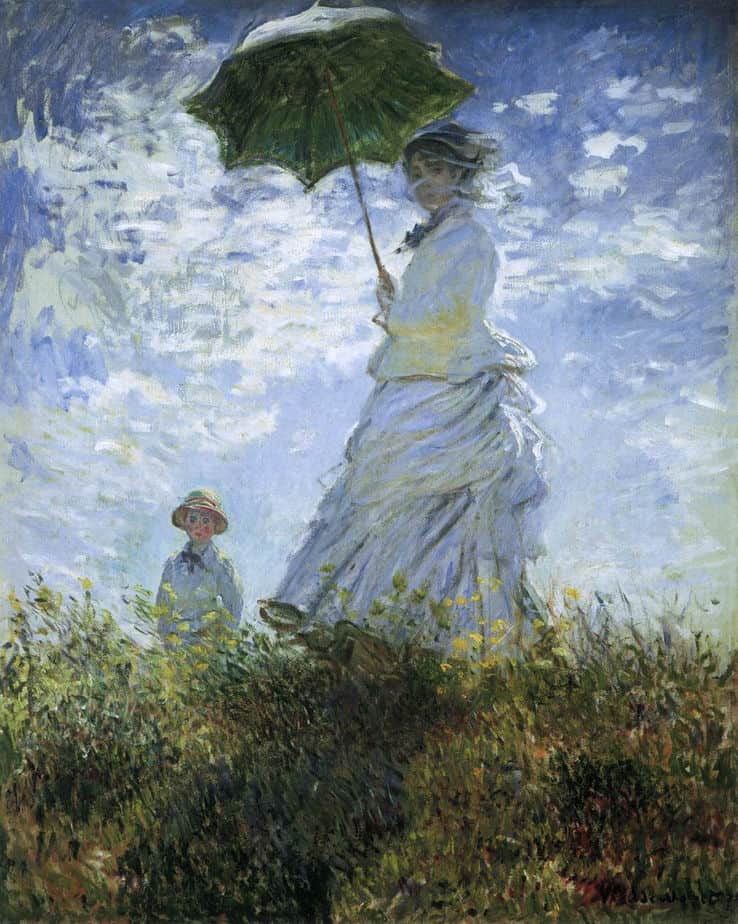 This artwork is an impressionist painting by Claude Monet that captures his wife strolling along with their son on a windy summer day, it is a painting of an everyday family scene, it captures a brief moment while he spent some quality time with his family.

It conveys the feeling of a family outing rather than a formal portrait and suggests that it might have been done in a single session spanning several hours and that Monet’s wife and son, interrupted their stroll to enable him to capture the moment.

The effects of the wind and the direction of sunlight cannot be mistaken in this painting. The painting is also referred to as the stroll and was purchased by Mr. and Mrs. Mellon and was later donated to the National Gallery of art. 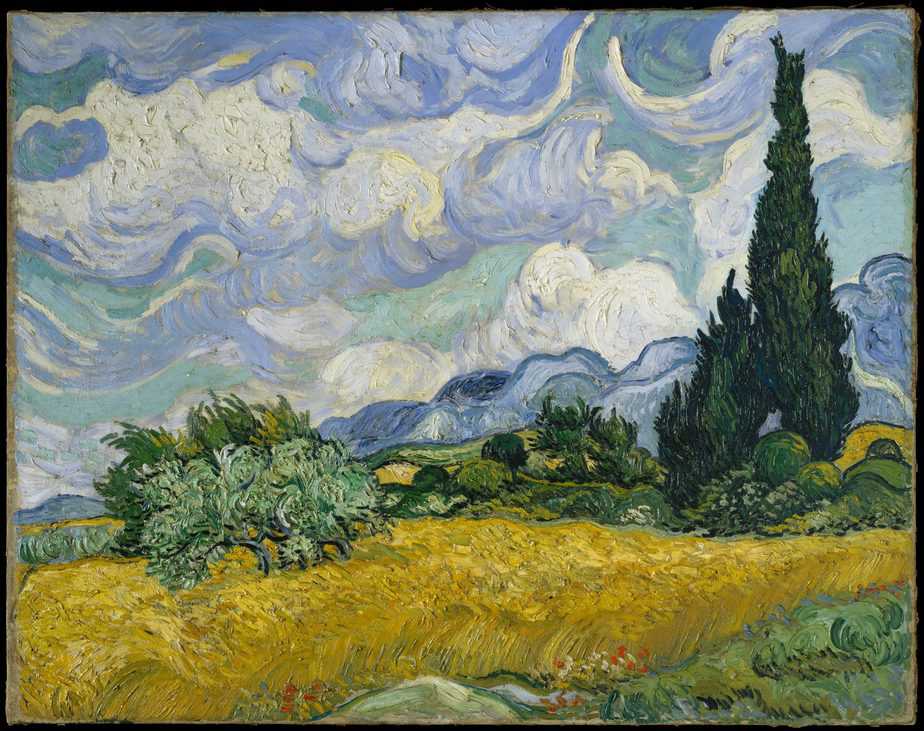 This work is one of Van Gogh‘s similar paintings in his wheat field series. This too was inspired by a view from the window of the asylum where Van Gogh was voluntarily a patient between May 1889 and 1890.

It shows golden fields of ripe wheat, a dark fastigiate, green olive trees at a distance, and hills and mountains visible as well. This work is regarded as one of Vincent Van Gogh’s best summer paintings.

In this painting, Van Gogh’s perception of nature and intensity of feeling are pronounced and the painting is seen as the diurnal counterpart of his work, “the starry night”.

9. The Absinthe Drinker By Edouard Manet. 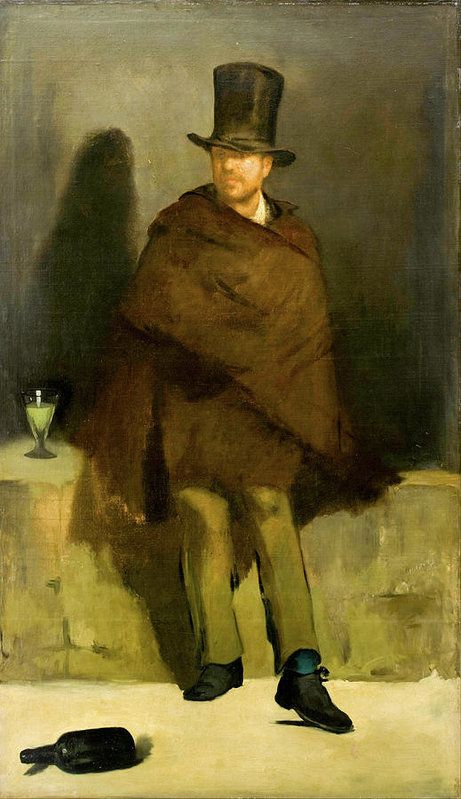 This is considered to be Manet’s first and original work. It is a full-length portrait of a famous alcoholic and ragpicker, Collardet who was often seen around the Louvre area in Paris.

It is painted mostly in dark tones with Collardet standing and putting on a black hat with a brown cloak with an empty bottle discarded on the floor by his feet. It was created in an era where full figure portraits were of royals and members of the aristocracy.

When this painting was presented at the Paris salon being Manet’s first work, it was rejected with only one vote in its favor. Little of his earliest works have survived and may have been destroyed by Manet himself.

10. The Card Players by Paul Cezzane. 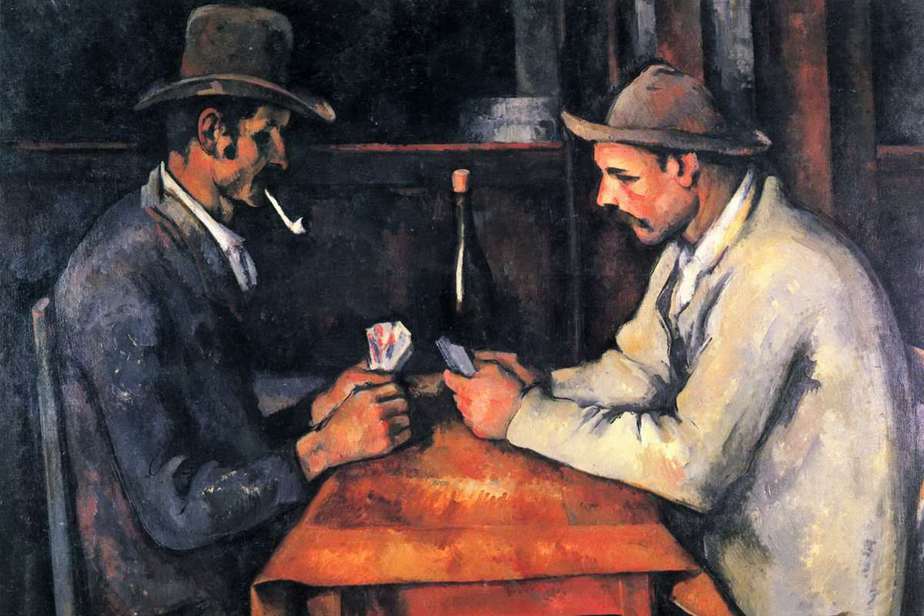 This is a series of impressionist paintings by French artist Paul Cezzane. There are five paintings in the series with the paintings varying in size and number of players.

One of the paintings was sold to the Royal Family of Qatar and estimated to have been sold at $250million. It had the highest price ever of painting until 2017. The paintings in the card players series do not share a single home and are dispersed all over the world.

So you’ve been hearing about the concept of impressionism and have had absolutely no idea about it, I’m sure you know a lot about it now. The aspect of impressionist art is one that promises so much fun and creativity while allowing you to relate to everyday scenes and occurrences.

The only thing you have to do is to take note of color schemes and the usage of lines and lightning as well. If you’ve been trying to delve into this area, now is the time. Also, check out 25 Most Famous Impressionist Paintings

END_OF_DOCUMENT_TOKEN_TO_BE_REPLACED

15 Most Famous Paintings by Claude Monet

This article contains Claude Monet's most 15 famous paintings. Claude Monet was a founder of French Impressionist painting. His paintin...