Maqbool Fida Hussain, more famously known as M.F Hussain, began his painting career in 1937. Over his career, he became quite the popular artist from India, who also received some acclaim on an international level.

As a result, many of the artist’s paintings, many of them about the beauty of Indian women, have made his home country proud. Especially at the beginning of his career, he was faced with difficulty, but things took a turn for the better when the artist began to paint landscape paintings.

As with many artists, Hussain was embroiled in many controversies, despite the international appreciation much his art received. Here is a list of some of the Top MF Hussain paintings, showcasing the style and talent of this famous Indian artist. 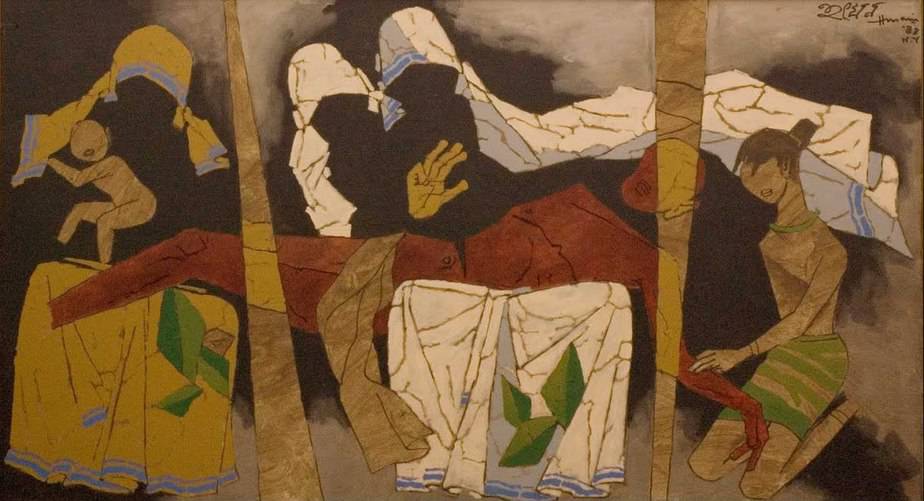 The work that Mother Teresa did for India is an inspirational thing, and M.F Hussain was certainly attracted to this when he made a painting of her.

This painting certainly depicts the impressive nature and character of Teresa and while some were not satisfied with his depiction of her, there were many viewers who looked upon the work very favorably. Through the simplicity and subtlety of the work, and due to the legendary nature of Mother Teresa, the artwork quickly became popular with Hussain’s viewers.

When it was showcased at an auction, it was valued for a price of more than 1 crore, equivalent to about $140,000 USD, suggesting through it’s worth its inherent beauty. 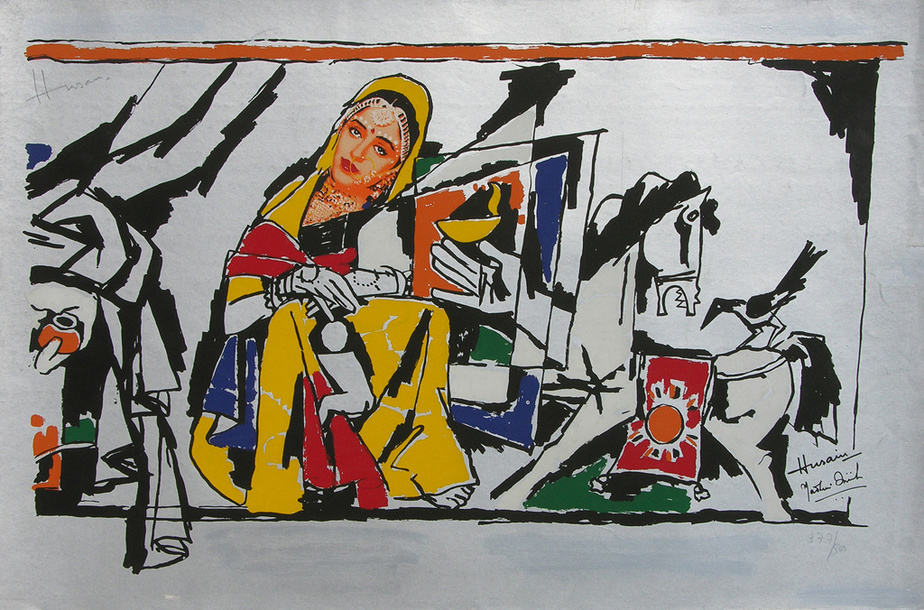 A painting of a famous actress named Madhuri Dixit, M.F Hussain was inspired to paint her on canvas on account of her style and personality which he appreciated.

As a result, the artist produced many paintings of the actress, attempting to show her beauty in a way many others could appreciate. His paintings put the moods of the actress onto canvas and many of these works are applauded by many for the style and craftsmanship of the artist.

These paintings received both criticisms and deemed controversial for Hussain, but also garnered much appreciation too. 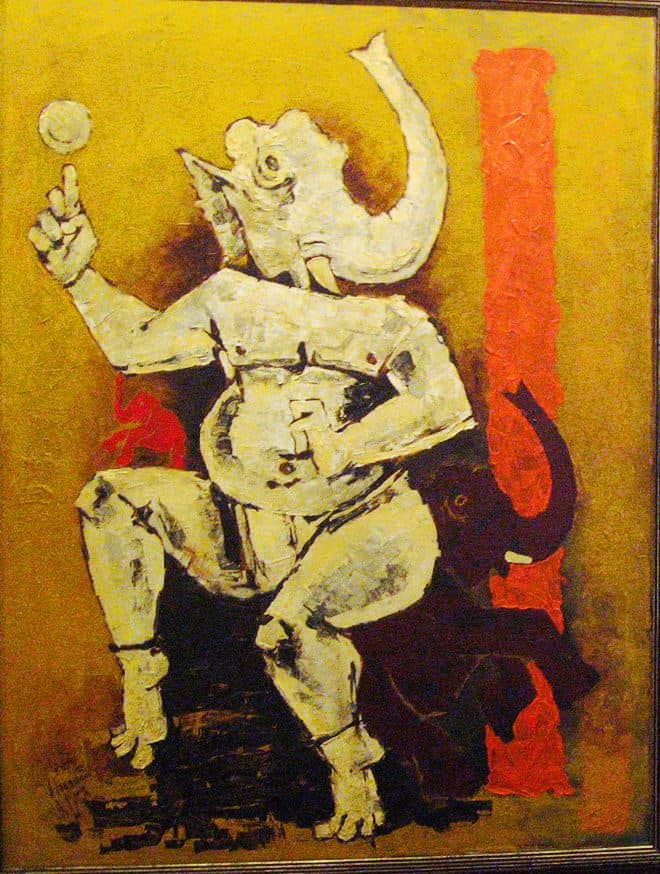 Perhaps some of his more controversial works, many considered Hussain’s paintings of the many Hindu deities to be disrespectful in the way the gods were portrayed.

As with many controversies, however, these controversies only served to make the artist more and more famous, despite the accusations.

Many of the images that the artist produced on the Hindu gods attracted a lot of negative opinions about his work, but it is without a doubt that the negative responses caused many more to view his works.

4.Battle of Ganga and Jamuna 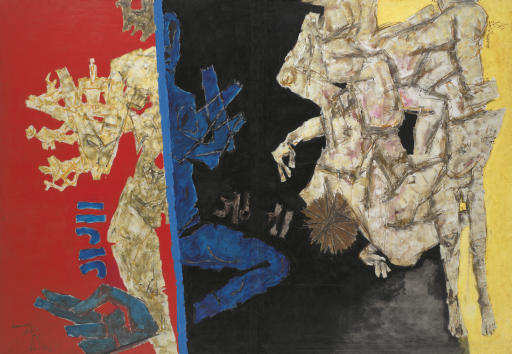 In everyday life, right and wrong are in a battle. The good and bad are always in a war, and the significance of this M.F Hussain painting is in the way that the artist demonstrates this conflict.

Life contains many different choices for us to make and there is always this tension we are faced when the dilemma comes to us: do we choose the right thing or the wrong thing? The artist made use of a variety of bright and dark colors in his palette that in their very essence show the conflict between the right and the wrong in the painting.

As a work of art, it is quite innovative in its style and the artist’s work was very appreciated, fetching a sum of 9 crores at auction. 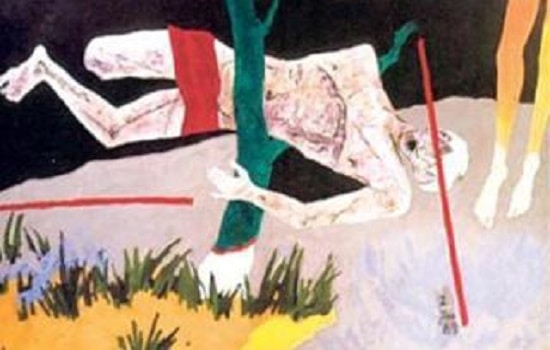 This artwork, Tribute to Hashmi, is a work that comments on an attack and the death of a theatre artist by the name of Safdar Hashmi.

A controversial work for this fact, the artist was never afraid to show the truth of the world in his artwork. Nevertheless, despite all the criticism painting about real-world issues brought, the artist would never stop depicting current world issues and situations in his art.

This artwork was sold at an auction for an amount of 4.4 crores and is one of a great many works produced by M.F Hussain for his willingness to create art about real issues. 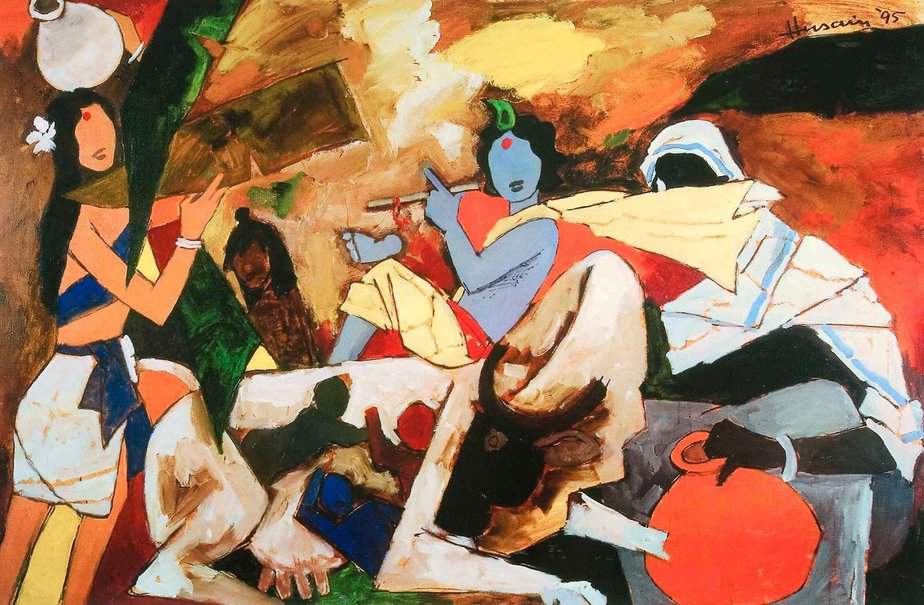 Much like the paintings of the Hindu deities, the depictions, and the way in which M.F Hussain portrayed Krishna was objectionable to many people.

Many people considered these works to present the major Hindu deity in an offensive manner, so as before, much criticism was levied against the artist by the religious faithful. The painting was harmful and hurtful, especially for the feelings of many people who viewed it.

The way in which the artist utilized the colors and the style produced a painting that looked very different from reality. 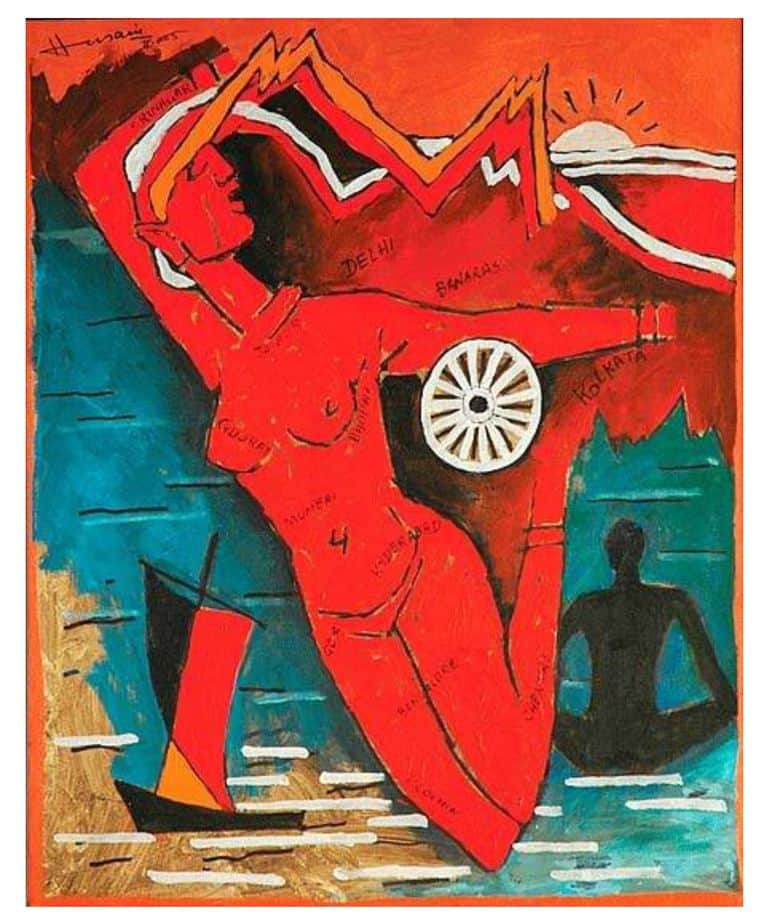 Bharat Mata is in fact M.F Hussain’s most controversial artwork. Not only did this work receive criticism in India, but worldwide also.

The painting depicts an Indian map in the form of a naked woman and is meant to portray the difficulties and hardships of the Indian subcontinent.

The use of a dark color palette of reds and blues certainly captures the attention of this artwork, but perhaps for all the wrong reasons.

There are many paintings produced by M.F Hussain, both impressive and controversial. One thing above all else is clear – the artist has an exceptional talent to show the world.

His style and his paintings capture issues, ideas, and controversies of his world, and like with much art, he is even more famous for his controversies.

Hopefully, these top MF Hussain paintings have opened your world and your imagination to the works of art coming from this famous artist. Also, check out The Difference Between Modern and Contemporary Art