Venus de Milo is the second-most popular woman in Paris’ Louvre museum. Beautiful woman, bare from the waist up, draperies cling to her body, her hips and legs are covered – believed to represent Aphrodite, who the Ancient Romans referred to as Venus.

The statue’s story is a delight in itself since its origins are still the subject of pure speculation – it was quite literally pulled from the ground only a few hundred years ago.

A Most Unusual Discovery

The statue was discovered in 1820, during the height of the Neoclassical movement. Antiquities were all the rage during this time, so much so that Europeans who would visit Greece made a name for themselves after they were caught digging up ancient marble and tucking it away to bring home as a souvenir. This is exactly how Venus de Milo was found.

French sailor Olivier Voutier was stopping over on the island of Melos, in the Aegean Sea. He and a local farmer were digging for marble and came across the statue, along with several other carved stones. 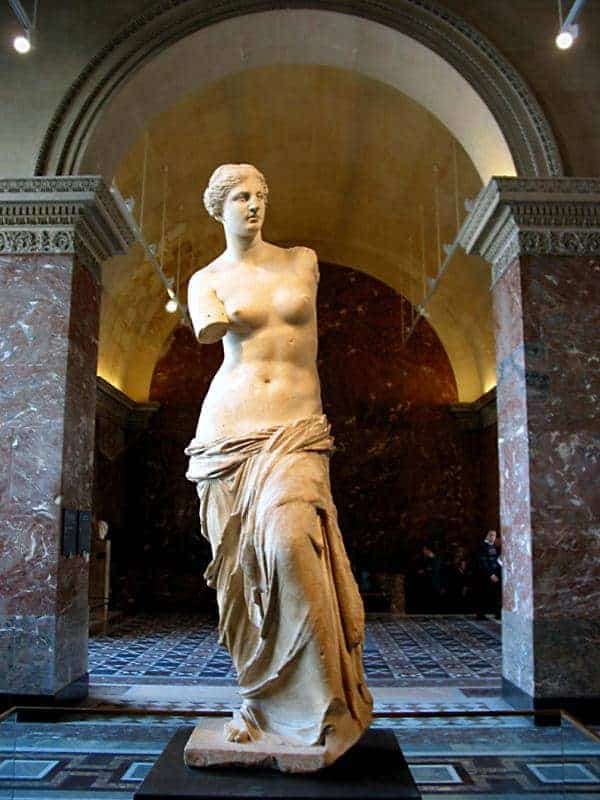 Voutier tried to convince his captain to sail to Constantinople immediately to get permission from the French ambassador to buy the statue. The captain refused, so Voutier eventually lost interest.

But a French naval officer, Jules Dumont d’Urville, decided he would snatch Venus up for himself and sail for Constantinople. Yet when he returned to Melos, his prized possession had been seized by a Turkish official, who had made a deal with a Russian captain.

D’Urville was determined to get the statue back into his own grasp. He negotiated at length with the islanders, who finally arranged to sell it back to him. He had Venus sent straight to Paris.

Classical Masterpiece, or Work of an Amateur?

Experts who laid eyes on the Venus de Milo were awestruck, and determined the statue to be a work of a classical master. It turned out not to be so simple.

The theory of German scholar Johann Joachim Winckelmann (1717-1768) dominated the discipline of art history at the time. He proffered that Greek art had peaked centuries earlier during the classical period (510-323BCE) and experienced a decline thereafter.

A first look at the statue, therefore, led museum experts to believe the Venus de Milo had been created during the belle époque of Greek art. It’s carved base, after all, masterfully fit the statue to a T. 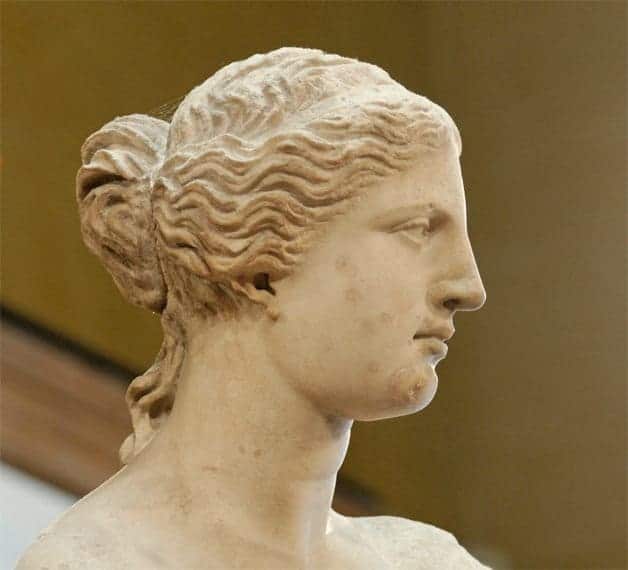 So museum curators ditched Winckelmann’s theory and ditched the classical base that was attached to the statue. Venus has been displayed in the Louvre without a base.

The statue’s beauty, as we know it, comes from its imperfection – it’s chipped, battered, broken, and yet elegant

It undoubtedly had a different impact before it was damaged underground when it was stationed in some Greek gymnasium.

The Greeks painted their statues with bright colours and decorated them with jewellery. Venus, an emblem of serenity, would have looked downright gaudy.

The Venus de Milo started its trajectory as an ordinary sculpture by an unknown artist, living on a remote island. It’s only after so much Greek heritage has been swept away that we can treasure the statue as an icon of feminine beauty.

Her missing arms are her most notable feature, and yet it’s possible that Venus did still have at least her left arm at the time she was discovered. Relatives of the farmer who dug up the statue later claimed that they had seen a left hand clutching an apple. Letters from other people involved in the purchase of the statue make several references to broken arms that were “detached from the body.”

It’s these wondrous and unusual qualities that made the Venus de Milo into a masterpiece. The status went on to majorly influence masters of modern art – take Salvador Dali’s “Venus de Milo with Drawers,” or Adolphe Bougereau’s innumerable representations of the statue as the perfect female form.

Venus de Milo is one masterpiece not to be missed if you ever visit Museum Louvre in Paris. Embrace the elegance

END_OF_DOCUMENT_TOKEN_TO_BE_REPLACED

Mystery to Masterpiece – Why Is Mona Lisa Painting So Famous?