What allows it to stand the test of time?

Is it the technique the artists use? Or perhaps it’s the colours? The theme?

No, it’s something infinitely more complex than that. Real art is alive. It is given power by the artists who see a different world and show us exactly what they perceive.

[quote_colored name=”” icon_quote=”no”]The mesmerizing charm of a great work of art doesn’t come from what is painted on the canvas. Rather, it comes from what was in the artist’s heart while he was painting.[/quote_colored]

In 1824, Nicolas I, the future tsar of Russia, commissioned a painting to commemorate a very special day in history. He made sure that a well-known painter was to illustrate his grand stature and show the whole world his greatness. The painting was supposed to be about him. Thus Franz Krueger was given the great honour to capture his future majesty’s prominence on the canvas.

Krueger was already a well-known painter in Berlin and specialized in military paintings and portraits, so this choice made a lot of sense. However, the artist had something a bit more different in mind. 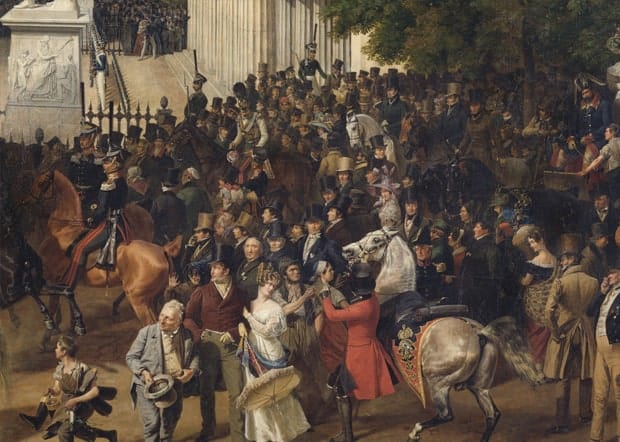 The painting shows a sky, shrouded in clouds. There’s a great gathering of people on the square so it’s obvious that something important is happening. The buildings are expertly painted to remind us of where we are. Statues silently observe as events unveil. In the background, soldiers are standing in perfect formation, each one a copy of the other. Military officers are riding their horses around to signify that something is going on, all the while a large crowd has gathered on both sides of the ranks.

The artist has beautifully painted the crowd and infused it into a whole – it’s impossible to tell if there are aristocrats or ordinary people under the black hats. There is no distinction – just as the artist wanted it.

It’s continuum of people. Just people, without putting an emphasis on their stature, social status, political influence, profession or anything else! Just people. The disorderly crowd provides a perfect contrast to the structured ranks of the military. This breathes life into the painting.

If you carefully read the description again, and if you observe the painting with a bit more attention to detail, you will notice that something is missing. Or perhaps not missing, but definitely not getting the focus some parties intended.

Where is Nicolas I in all of this?

It is a known fact that he was the one who ordered the painting and it was supposed to commemorate a big moment for him. Yet he’s not the centre of this incredible work of true art. He’s just a part of the crowd. Just another person in a sea of normal people! His stature and grandiose nature are not shown in the painting. Krueger wanted to capture something special, something grand, and having a lot more substance than the life of an aristocrat, even if he was a future tsar. Instead of being a monument of the duke’s ego, the painting actually told the story of the people in that particular moment.

[quote_colored name=”” icon_quote=”no”]Scandalous for its time, the painting gathers the attention of the art community to this day. It doesn’t have one central image to it, but rather shows the gathering of the Berlin bourgeois, subtly hinting that no one person is more important than the others; that they’re a whole and they are what creates the spirit of the city.[/quote_colored]

Krueger shows us that true art can be created only through courage, strength of character, and determination.

The artist simply painted what he saw. How was this gutsy?

It actually took a lot of nerve to depict the Berlin bourgeois with the same level of detail as the future tsar of Russia. The duke, his influence, the force of the Russian military – they are all undermined by the presence of these ordinary people in the painting. The painting was commissioned in 1824, yet Krueger didn’t deliver what was asked of him.

Instead of designing a beautiful lie or pleasing the king by bringing him to center of attraction, the artist represented the even more beautiful truth. He tells a narrative, showing us that there is no one “hero” in the centre of this story, but that each and every one of these people matter. They are what make the city what it is. They are Berlin and without them, there is no city; there is no parade; there is no story. 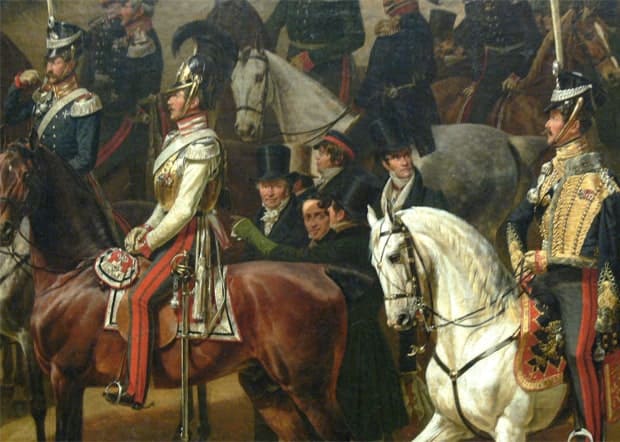 Look at the painting and ask yourself how does it make you feel? The dim sky perfectly sets the serious mood of the piece. The huge, empty square, the big buildings contrasting with the huge crowd underlines the importance of each and every one of the people present in the painting, whether we’re talking about soldiers, officers, or civilians. It makes you feel that all of them are a part of something great, locked in the moment; but also that they are the moment itself, and that this great thing wouldn’t exist without them.

It transports you into the parade and makes you feel like you’re a part of it, too. The painting simply inspires you to contemplate something great.

[quote_colored name=”” icon_quote=”no”]Krueger showed us that great art comes from the heart.It doesn’t come from doing what you’re told. This is why the painting is so mesmerizing – because it doesn’t portray something we’ve seen a thousand times before. It doesn’t paint scenes of the fake heroism of aristocrats at the time. There is no idealization or painting with rose-tinted glasses. The artist simply shows us the truth and the critical realism of his painting is what resonates with us.[/quote_colored]

Even though these two concepts don’t necessarily exclude one another, it’s entirely possible for beautiful art not to be powerful, while vice versa is almost out of the question. Power comes from creating something that’s exploring the boundaries and reaching new frontiers. It comes from doing something people think you shouldn’t be doing; the unpopular choices that are misunderstood by many; the experiments no one believes would be successful. Yet in most cases they are the ones that withstand the test of time.

[quote_colored name=”” icon_quote=”no”]A true artist has the courage to get outside of his comfort zone and this is when true masterpieces are born. Courage is possibly the most important aspect of painting something meaningful that leads to a greater understanding.[/quote_colored]

It breeds authenticity and is not there to please the audience, but to show them the way the artist sees the world. It’s there to make people ponder questions and think about their own reality. If you don’t do that, if your art doesn’t bring people to new heights, then what’s the point?

If you have the chance to visit Berlin—an amazing, living, breathing city which offers fantastic art—be sure to visit the Alte Nationalgalerie and see some of Berlin’s finest paintings.

Shares
Tags:
berlin, courage, i am an artist
Newer The Aestheticization of Violence in Art by Philippe Perrin
Back to list
Older What Is Beauty in Art?

END_OF_DOCUMENT_TOKEN_TO_BE_REPLACED

A lot of features affect the value of a piece of art. Appreciating art can feel very subjective, which often mea...