Assumption of Virgin by Titian

Assumption of Virgin by Titian was produced in 1516 and is considered to be one of the famous artworks of Renaissance Art movement. The work can be viewed now at Basilica di Santa Maria Gloriosa dei Frari, Venice

Assumption of Virgin is a large oil painting produced between 1516 and 1518 by Italian artist Titian .

Assumption of Virgin was one of the largest altarpieces in the city, Venice 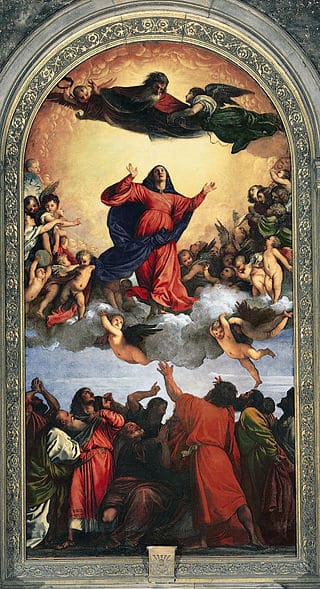 In this painting, Titian divided the exquisite work of Biblical art simply into three sections. Terrestrial plane depicts the lowest register where the disciples witness the assumption next the Virgin Mary soars in upward direction and she was surrounded by a swarm of angelic cherubim in the middle section, the top section represents Heaven where God awaits The Virgin Mary. The star shown in the painting is the Madonna and she was shown in a whirl of drapery on solid-looking clouds being elevated in upwards direction. The most famous Assumption in Renaissance art was when Mary is assumed into heaven. Here, looking at Assumption of Virgin one gets a feeling that Mary is not just a symbol of salvation but perhaps a symbol of Venice.

Above Mary the Virgin, the heavenly zone is drawn with the golden color depicting as light (below her set the following Saint Thomas, Saint Peter and Saint Andrew). They all are stunned by the miraculous happening to their savior but also were distraught at losing her (the mother of Christ). They implore the mother of Christ to stay with them but her gaze is already directed towards Heaven. She was awaited by God and the face looks with a strict yet sad face on her children below.

Titian’s painting Assumption of the Virgin adds inspiration from several sources and paintings outside of the Venice. Many include from The Sisting Madonna which was completed between 1513 and 1514 also some other works of Raphael were taken and Michelangelo’s Genesis fresco was also taken from the Sistine Chapel.