Located in south eastern Brazil, Sao Paulo is a bustling city that claims the title of the 12th largest city and 7th largest metropolitan area in the world, an incredible amount of skyscrapers, and one of the world’s largest helicopter fleets.

The city is incredibly diverse and is the most often chosen new home of Italian, Arab, and Japanese immigrants. Sao Paulo is enjoying very high economic growth and is poised to have the third highest growth in wealth in the next decade.

The city was the first in Brazil to embrace the green ecological movement in business, the first to outlaw billboards, and home to the first stock exchange to join the United Nations Global Compact. The city is the leading host of international events and is known for its hospitality in receiving massive numbers of international visitors for such events.

[quote_colored name=”” icon_quote=”no”]Sao Paulo also leads in art as it is the Brazilian nation’s art center. Even its State buildings house important art collections that are accessible to visitors. Art is sold in all types of spaces from fairs, to galleries, to markets.[/quote_colored]

There is much to do in Sao Paulo for tourists, especially art tourists. It is also a burgeoning city of resources for artists and is making a name for itself internationally at art fairs and galleries worldwide.

The supposed “best” art museum in Brazil is the Museu de Arte de Sao Paulo (MASP) which features an important permanent collection that spans centuries and a range including the great masters to illustrious modern and contemporary artists. It is located on the Avenida Paulista which is an attraction on its own in a hovering building that is a testament to modern architecture. The curators have displayed works by theme rather than chronological order (portraits with portraits, etc.) and have included English translations. 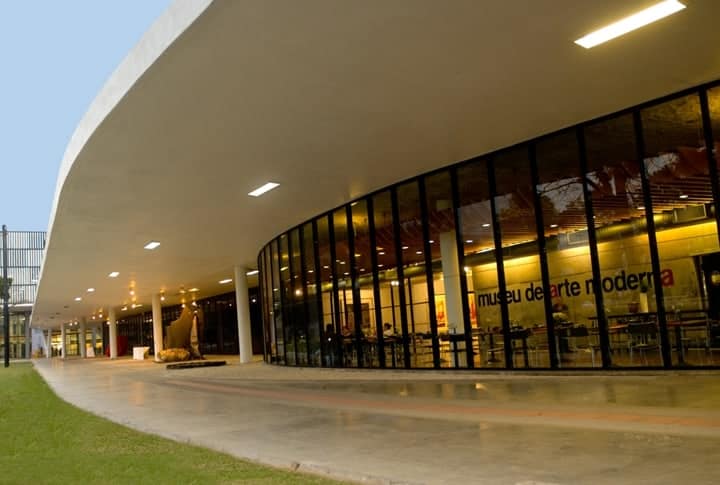 The Museu de Arte Moderna de São Paulo (Museum of Modern Art – MAM) holds over 4000 works and is located in the city’s Ibirapuera Park. The park consists of 545 acres of natural beauty mixed with cultural attractions such as museums, a planetarium, performance pavilions, monuments, an exhibition palace, and a gymnasium. The park is home to the Sao Paulo Art Biennial and Sao Paulo Fashion Week.

Also located within the park is the Museu Afro-Brasil. This museum is a rich collection of historical and religious artifacts and works art from both the past and present. Brazil brought more slaves from Africa than any other nation and many Brazilians are of mixed race. This museum takes the visitor on a tour of black Brazilian history culminating in the present artistic works of black Brazilians.

Baro Galeria is a contemporary gallery in the Barra Funda art district known for its work with national artists as well as artists from other Latin American countries. Housed in the expansive space of a former hanger that allows for display of large installations, Baro Galeria works to expose new and established art collectors to new and established contemporary artists.

Choque Cultural, a gallery whose name translates to “Culture Shock” focuses on works of underground artists. Not only does the gallery bring underground, pop, and outsider art to the public in its gallery space, it sells screen prints of their works as well. The art is young and fresh with a nod to street art.

For a historical perspective on the Brazilian art scene, visitors can visit the Pinacoteca do Estado gallery which houses a resistance memorial that focuses on the resistance of the peoples of Brazil to military dictatorship. There is a museum dedicated to art education, a library, and a documentation center in addition to the gallery which features modern and contemporary art.

The Instituto Cultural Tomie Ohtake, named for the important artist Tomie Ohtake, is the largest gallery in Brazil with seven floors of new international and national art, with special regard to art created within the past fifty years. Famous artists displayed here include Salvador Dali and Kiko Farkas.

An alleyway named Beco do Batman is a modern day outdoor gallery of the best street artists in Brazil. Their vivid works cover every inch of space along this corridor and they also cover multiple themes, styles, and subject matter.

Architectural wonders dot the city, including the Copan designed by famed Brazilian architect Oscar Niemeyer. The Ibirapuera Park holds many such interesting pieces of architecture.

The Matilha Cultural gallery is an important meeting place for artists (or art enthusiasts) and their pets. Dogs and cats are welcome to join their owners here to enjoy art, cinema, and deep conversation over drinks while becoming engaged in topical art works.

The Instituto Cultural Tomie Ohtake provides art education and seminars, and four studios in addition to its onsite bookstore.

Like Rio, Sao Paulo also has a Carnival with parades, parties, and Sambadrome, a samba competition featuring dancers from several of the city’s dance schools.

Fashion week isn’t just once a year, but twice. It is held at Ibirapuera Park and features top designers and is the fifth largest fashion week in the world, topped only by New York, Milan, Paris, and London.

Every year, over 400 films are screened at the Sao Paulo International Film festival, also known as Mostra. The program includes documentaries, shorts, and feature films.

The Spirit of London is an electronica music festival that plays on into the early morning hours with DJs from Brazil and other nations spinning music in the Parque Anhembi.

Sao Paulo Art Biennial takes place every two yeqars and displays works of contemporary artists from around the world. It is scheduled to coincide with the International Biennial for Architecture and Design. The event is held at Ibirapuera.

The Sao Paulo International Art Fair also takes place at Parque Ibirapuera, and is held in the Ciccillo Matarazzo Pavillion designed by Oscar Niemeyer. It pulls in galleries from around the globe. The show features over 137 participants, and top gallerists from leading galleries in London and New York.

The city of Sao Paulo, Brazil has unique culture and artistic merit. Traveling is said to be meant to broaden the mind, and Sao Paulo provides many opportunities and experiences to add richness to the mind of any traveler.

Tags:
courage, travel
Newer The Beauty of Brilliant Beirut
Back to list
Older Why View Of The Flower Of Greece Is Truly A Masterpiece?

END_OF_DOCUMENT_TOKEN_TO_BE_REPLACED

50 Years of Independence And Art Reign in Singapore

END_OF_DOCUMENT_TOKEN_TO_BE_REPLACED

Color Psychology: Why We Love Some and Hate Others?

Imagine you are looking at a surface that has been splashed with color. Perhaps it is paper, or an artist’s palette, or a wall. There i...

END_OF_DOCUMENT_TOKEN_TO_BE_REPLACED

Marble Trace by Reynier LLanes Narrates the Essence of Life, Harmony and Gratitude

The essence of all beautiful art, all great art, is gratitude. Humans are creatures of habit and routine. We often miss seeing the a...