Well, for one, it is said that Berlin has more museums than rainy days – 175 of them to be exact. Not all of them are art museums, but Berlin is home to some of the most important art museums in the world.

Visiting Berlin has been a dream of mine for long, but an opportunity to visit this diverse city made me realize why Berlin is known as an art lover’s paradise.

Berlin has been around, in part, since 1237 AD, specifically the part known as Colln. Berlin itself is referenced in 1244. The city is home to three UNESCO World Heritage sites, being named “UNESCO City of Design”

Berlin also boasts nine castles, six manors, three active opera houses (the most in the world), and the longest open air gallery in the world. This gallery extends the length of 1,216 meters of a surviving piece of the Berlin Wall with 105 paintings from artists from 21 countries across the world.

A city nine times bigger than Paris, with more bridges than Venice, navigable by boat with over 180 km of waterways, four universities, four art schools, residents from over 184 nations, Berlin is one of the most fascinating and fun to explore cities in the world.

If you want to learn more about what’s written in the history books, you’ve got a city to conquer and explore, and that’s Berlin. Berlin’s rich history has spread all over the world, thanks to its legendary noble scientists, philosophers, and groundbreaking artists.

Many modern art movements owe a substantial nod to the art schools and artists of Germany.

The Berlin Art Scene is very diverse from the authentic street art culture of East Berlin to the sophisticated contemporary art scene of West Berlin.

When they saw the other side of the wall for the first time, East Berliners were met with a riot of color and image done in ways they had never seen before. This sparked a street art movement in East Berlin that has evolved into a very deep and moving tradition.

A book store, Neurotitan located in House 39 hackescher markt is a must visit to see what Berlin has to offer in terms of creativity! 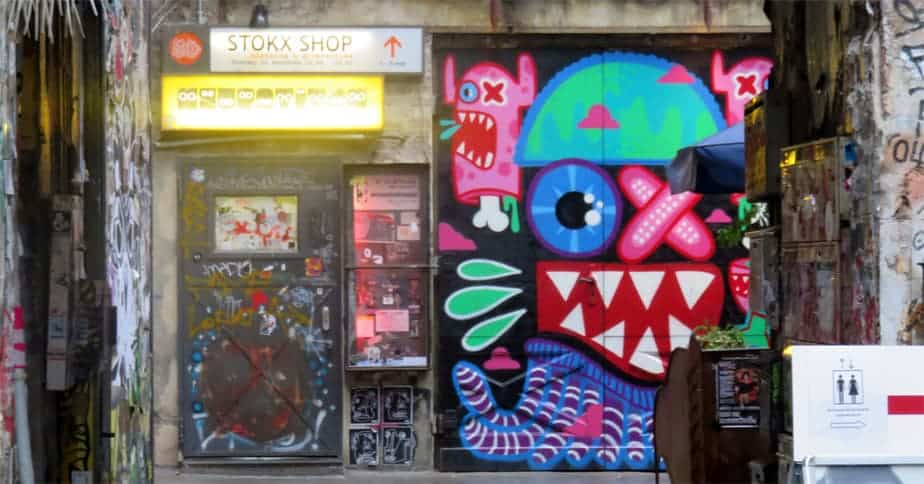 The artist BLU creates large scale pieces that have a puzzle like message that is poignant when you see it. The artist is creative and innovative in using street art to create wall painted animations on film.

The crew 1UP has gained popularity with their simple yet beautiful tags throughout the city in uncommon and hard to reach places. They have released a documentary called One United Power, the full name of their crew.

Roland Brukner, a.k.a. Linda’sEx, is a street artist in Berlin that gained media attention from the sad and mopey figures he painted that were pining for a girl named Linda. The city became so involved in the figure’s heartbreak that radio and television followed the story. Other street artists posted responses. Museums have since exhibited the story of Linda’sEx.

The artist Alias uses carefully drawn stencils to create work that is similar to that of Banksy. His work is usually a clever pun or message and is created to fit in with the environment. 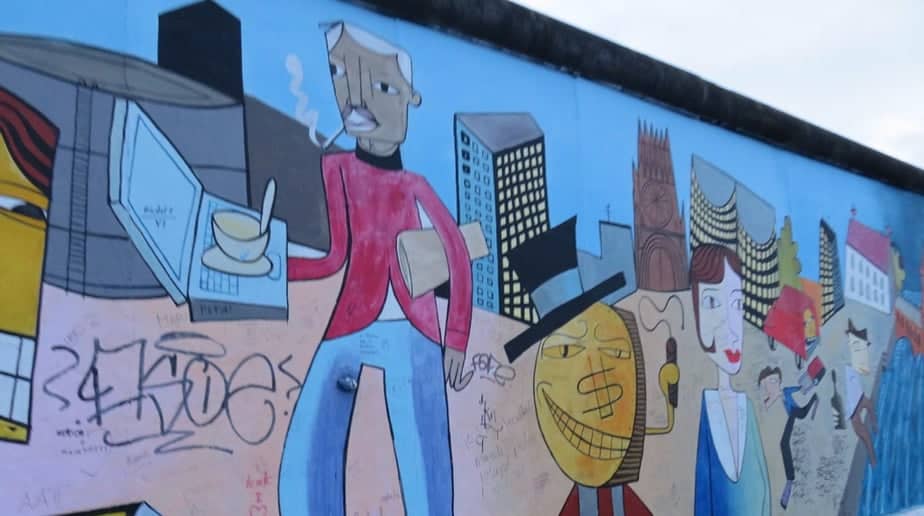 Other areas of the city have artistic subcultures as well. West Berlin his home to the Neu West Berlin, a contemporary art space of nine stories that includes studios, ateliers, event spaces, show rooms, and exhibition rooms. There are over 80 artists that work in the space.

West Berlin artists regularly meet at Enzian, a bar that was founded as a refuge for punk and new age musicians but that has become a networking hub for artists of all types to work and inspire each other across mediums.

The city hosts art with diversity in space as well. The Sammlung Boros collection is housed in a World War II bunker, featuring renowned contemporary artists with intimate tours of 12 visitors at a time.

The Haus am Waldsee is a fairytale like villa with an adjoining sculpture garden that not only shows the greatest contemporary art to date, but is also a platform for artists that currently live and create in the city. You can even view the private collection of German art collector Thomas Olbricht in his residential space. The collection contains works from the 16th century to contemporary pieces. 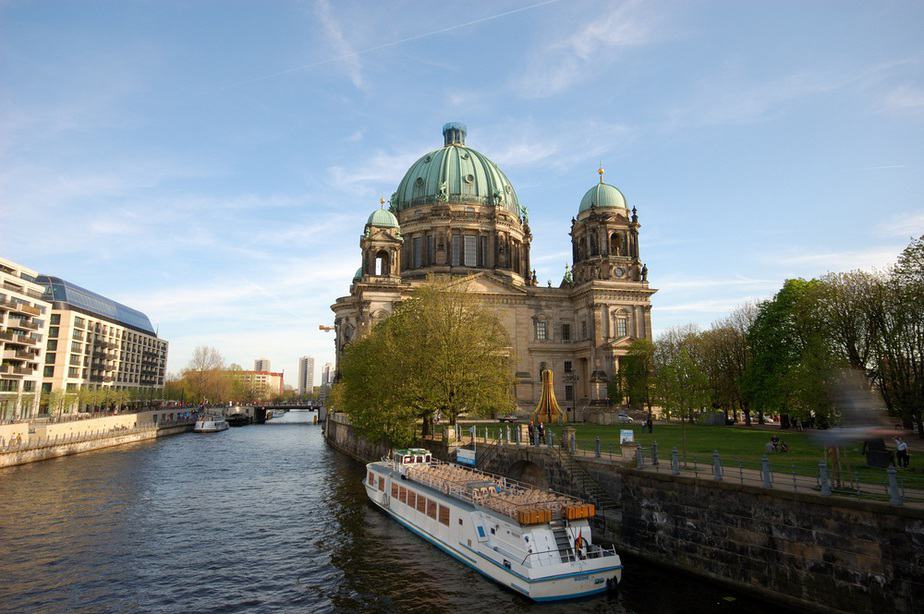 Museum Island on the Spree River is a UNESCO World Heritage site that is home to five museums housed within grand examples of exquisite architecture. A lot of street art can be seen all around Berlin that has an obvious, or sometimes very subtle, anti-establishment hint in it.

The Pergamon museum houses the Pergamon altar frieze from the Pergamon acropolis. Built as an altar of Zeus, it dates to 165 B.C. Works housed in the other four museums on Museum Island include the Bust of Nefertiti, Byzantine art, Egyptian art, Biedermeier, and others.

The Neue Nationalgalerie is one of the most influential contemporary art museums in the world. It is a National Monument of Germany and includes 20th century contemporary art and sculpture gardens.

The Berlin Art Week is annual celebration of art that takes place every September. During the month, the most important art fairs in Europe. Hundreds of galleries take place in this yearly event.

Preview Berlin, an art fair that takes place in various locations, often shows work from not only emerging artists, but art students in addition to the major players in the contemporary art scene.

Art Berlin Contemporary has recently changed from a curated show that was by invite only to a full-fledged art fair that brings in curators from the world’s leading museums such as the Tate and MoMA.

Berlin’s art week is a well-organized even that also includes performances, lectures, and social receptions for networking amongst gallerists, artists, curators, and collectors.

In addition to the obvious reasons that Berlin is a visual art lover’s paradise, visitors to Berlin will be exposed to all of the culture and diversity that influences art also influencing food, music, architecture, and the performing arts.

Have you visited Berlin, if so would love to hear your thoughts.

Tags:
berlin, museum, street art, travel
Newer Why Every Human Is An Artist?
Back to list
Older 10 Must Visit Art Festivals and Exhibitions Around The World

END_OF_DOCUMENT_TOKEN_TO_BE_REPLACED

50 Years of Independence And Art Reign in Singapore

END_OF_DOCUMENT_TOKEN_TO_BE_REPLACED

What makes art truly great? What allows it to stand the test of time? Is it the technique the artists use? Or perhaps it’s the co...

END_OF_DOCUMENT_TOKEN_TO_BE_REPLACED

MyneAndYours – Honouring the Power and Beauty of Street Art in Sharjah

The United Arab Emirates’ colorful art scene today proves that this region in the Middle East does not only thrive in its usual stereot...

END_OF_DOCUMENT_TOKEN_TO_BE_REPLACED

Off The Beaten Path : Top 8 Art and Culture Attractions in Prague

Beaches, lakes, cabin getaways—all of these are fine choices for a vacation, and you may find inspiration from any of them. But wha...