Tenderness, love, compassion are core values of the human race. Krishna is the god of compassion, love, and tenderness in Hinduism. Most of the major gods in Indian art traditions have all been giving spouses, they are rarely known to be celibate.

When reincarnated they become more explicit in their attraction for the opposite sex and demonstrate it. The goddesses who happen to be the spouses of these gods are not left out in this display of affection as they often portray their love for their husbands assertively and sensually.

Gods and goddesses represent the concept of dualism, like two performers doing a duet, one relying on the other, they complement each other.

Krishna’s love encompasses the whole concept of love, commonly an emotion, a strong attachment, and personal attraction. Love is the basis for any relationship no matter how fickle and this has made it a major theme in creative arts.

Krishna by every physical standard was irresistible and appealing. Ancient texts talk about his alluring countenance, hair, complexion, and other elements of his beauty at length.

To date, he faithfully represented with a yellow garment, a crown of peacock feathers sitting pretty on his head and a smile on his lips.

1.Krishna and the Gopas huddle in the rain. 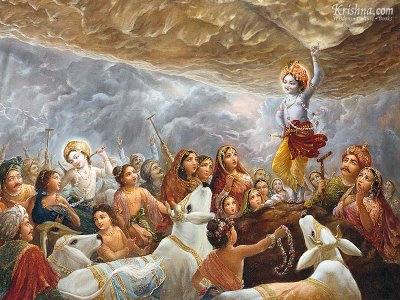 In a forest in Braj, there is a lotus-filled pool with cattle huddled together. We see Krishna and his cowherd friends (gopals). It is the rainy season and beneath a cloudy, swirling sky it is seen that several of the gopas are putting on hooded jackets as protection against the heavy rain while Krishna takes his place under a leafy umbrella.

Indra, king of gods and lord of the heavens sent the rain as retaliation because Krishna persuaded the gopas to worship him alone and not Indra.

Shortly after taking refuge from the rain, Krishna will lift mount Govardhan represented by the large rock Krishna sits on, with his little finger. This is a show of his superpower and the gopals showing approval for his superpower to take shelter under the raised mountain.

The cloud in the sky, the tree with a gnarled look, dark colors, heavy faces, and figures are distinguishing features of the artist. Steven Kossak has called it the Master of the swirling skies. Kossak regards this picture paying attention to the overall tone, somber sky, background, and foreground with warm tones restricted to the bright red of Krishna’s dhoti and little touches of yellow. 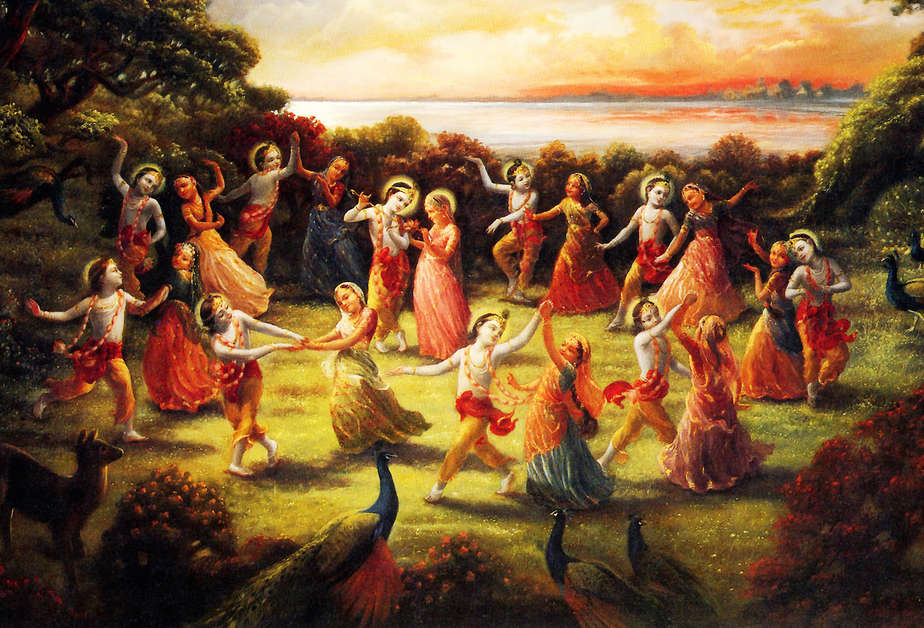 Here, Krishna is the center of attraction as he plays the flute at the center of a circle of dancers made up of seven gopis or milkmaids, and seven figures of Krishna.

The god has magically multiplied himself so that each gopi thinks he is dancing with her alone. Musicians from different angles provide music for this show of love, while five gods, taking note of Krishna’s prominence hover in the sky.

The deities are the moon god Chandra, seen driving a chariot driven by two antelopes. Second is Indra, the god of the heavens on a white elephant. The four-headed Brahma is spotted riding on a goose, the cobra adorned Shiva on a bull, and Surya the sun god on a chariot drawn by two horses.

These gods are carting flowers to the ground as a way to pay homage to Krishna and his dance team. The flowers adorn both the earthly and the heavenly parts of the picture.

As the case is with early Pahari painting, the composition breaks into the white borders on the right and left, making it look as if the page orientation could not conveniently make room for the thrusting.

Krishna’s great team of dancers is replicated by the stunted circle of trees at the top center and by the lotus flowers, rounded buds, and leaves in the lower panel of water. You can almost hear the continuous drumbeat of the musicians and the rhythm of the dancers.

3.The lovers Radha and Krishna are in the palm grove. 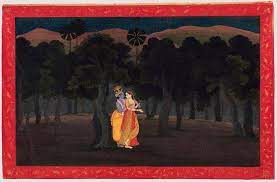 Here, NANDA a cowherd who was Krishna’s father by adoption, urged Radha to accompany Krishna home because he is scared of the dark. Graced dancers, the lovers stop to share a warm embrace on the banks of Yamuna River, around them trees carry out a dance in twos, re-enacting the stages of their developing attraction for each other.

On the farther shore of the river, there are visible rounded hills beneath a sky shining bright with stars. With the beautiful interpretations of the forest during springtime, the painting gives roots to the rustic setting in which other paintings from the romantically inclined Gita Govinda series will unfold.

Gesticulations made with the hand and body as well as eye movements are seemingly more important in India than anywhere else you can think of.

This idea of nonverbal communication was put in place there at a very early date. Hand gestures or mudra’s of the gods were designed to help in communication with the devotee.

As time went by, these hand and body gestures alongside the eye movements became very essential in understanding what classical dance and drama entail.

Krishna places his left arm around Radha’s shoulders and reaches out ever so gently, for her breasts with his right hand.

Radha on the other hand, makes futile gestures, trying to restrain Krishna’s hand and pointing with her right hand, to the path which Nanda had instructed them to take. A reminder of the fact that they had deviated from Nanda’s orders.

However, there is little or no conviction in the way she tries to resist because she turns back and gazes affectionately into Krishna’s eyes as she stands like an elegant dancer, left leg lightly crossed against the right and toes touching the earth.

These phenomenal works were published and illustrated here for the first time and a major characteristic that stands out is the brilliant colors and clear, powerful replications of scenes from Hindu epics.

They also offered a new way of reaching out for the divine through a form of personal devotion called Bhakti that had spread in India’s Hindu community while at the same time bringing life to the concept of gods, demons, mysterious symbols, lovers, and amazing creatures that are symbolic to literature and worship.

If you must appreciate Indian paintings and art, you must be able to relate to and fall in love with their elemental qualities such as their blazing color, dark lines, and the profound philosophy and mythology that is their good spring.